Soldiers Stoned to Death – Is the Nation Shamed? 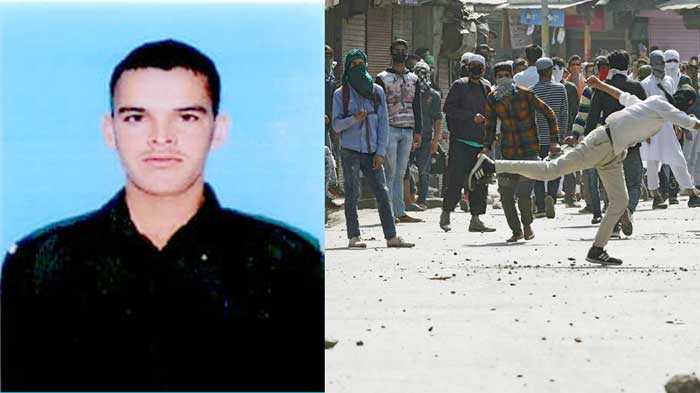 Close on the heels of government’s nationwide celebrations of the second anniversary of surgical strikes through ‘Prakaram Parv’ and immediately preceding Army celebrating the ‘Infantry Day’, 22-year old Sepoy Rajendra Singh died of stone-pelting in Anantnag district of J&K. Rajendra was part of a Quick Reaction Team (QRT) providing security to a Border Road Organization convoy when the vehicle he was travelling in was stone-pelted. He was hit by a stone on the head and he succumbed to the head injury after reaching the hospital. Rajendra belonged to village Badena of Pithoragarh district of Uttrakhand and had joined the Army in 2016 and is survived by his parents.

For an Army soldier to die like this is disgraceful but a bigger shame is that there is little reaction from the hierarchy. For the erudite Defence Minister this would naturally be of no consequence. On the sidelines of Infantry Day, the  Army Chief reiterated what he had said earlier that stone-pelters are like over-ground militants. It was perhaps politically more convenient for him to warn Pakistan yet once more (who snigger at such warnings) than mentioning that an Army jawan had died because of stone-pelting and that in future his soldiers will be instructed to respond as deemed fit. The warning that ‘surgical strikes’ can be repeated doesn’t scare Pakistan. The requirement is to ‘transport’ this irregular war from our territory across the border, for which the government has no plan or guts. Wonder if it is realized that soldiers being killed by stone-pelters is murderous assault on the very ethos and psyche of not only the soldiers but the Army as a whole.

MoD’s pathological distaste for the Army is reflected in why MoD’s spokeswoman has been sent on forced leave because of uproar in the media over her tweet. Now MoD has apparently recruited an IDS guy to sermonize on the ‘bloated’ Army. Whether he has any idea of our borders and what it takes to guard them or he belongs to the category of bureaucrats who as FM Sam Manekshaw said can’t differentiate between a guerilla and a gorilla is not known, but he could be related to one of his predecessor in Defence Accounts who asked the widow of a soldier to show her husband’s body in order to claim widow pension – yes this is true, as tweeted by a former DGMO. But this IDAS-turned-scholar dare not touch why a 13 lakh Army needs to be supported by 4 lakh civilians like him who are mostly unaccountable, are eating into the defence budget in major way with each of them five times more expensive than their uniformed counterpart – because that would cause gas leak from all his pores. Obviously he would also not mention that 7th CPC and grant of NFU to civilians but denied to Armed Forces have made organizations like BRO, MES and the like grossly dysfunctional.

To expect the Defence Minister to react to a soldier stoned to death is perhaps too much when the Army hierarchy itself has generalized the issue.  Why would J&K Governor even say that stone-pelting is akin to terrorism or abetting terrorism, which should be punishable? But even if he says so, there are no cameras to identify which rat threw the stone whether he had his face was covered or not. So how would you punish the culprit (s) anyway?  With talk in the air of some freebies coming with the 36 Rafales ex France, perhaps Defence Minister Sitharaman could garner some free advice from Israel how to deal with stone-pelters; along with the Barak 8 missiles deal.

Not that there is no public outrage over Sepoy Rajendra Singh being stoned to death. One comment on the news report reads “The army should stop handling these terrorists with kiddy gloves. These stone-pelters should be made to pay for the soldier’s death”, while another comment reads “Appeal to PM Modi: do what Rajapaksa did in Sri Lanka. No half measures. ……. You don’t need to worry about Raj Dharma because Dharma itself has said to punish the evil.” But for politicians, soldier’s lives are expendable. But some politicians in past have gone on record to say soldiers join the Army knowing they are to die. Someone may now say how does it matter if a soldier dies from a bullet or stone?

Why would Pakistan not keep slapping us repeatedly when: we don’t know how to handle stone-pelters even when they ‘stone to death’ soldiers, and; the mantra is ‘restraint’ with politicians cozy behind layers of security. Inserting slogans in media like “no more amnesty for stone-pelters” doesn’t impress. Those in jail will in all probability be granted amnesty close to elections. The news that state may take up the issue with the Centre too is a lollipop that will vanish in transit, with the judiciary’s distatste for sugar. But accepting soldiers being killed by stone-pelters is another low in politicization of the Army, consequences of which can be grave and more troublesome than 756 Army personnel knocking on the doors of the Supreme Court against dilution of AFSPA and filing of FIRs against soldiers committed in counter-insurgency.  We need to read up how nonchalance to soldiers’ lives witnessed ‘fragging’ in the US Army during the Vietnam War.

The Supreme Court needs to ask the government to intimate how long concerned State / region will continue as ‘Disturbed Area’ and fix a deadline up to which it intends to deploy the Army to compensate misgovernance? The CRPF is nominated the primary counter-insurgency force in the country and the CAPF already equaling numerical Army strength are expanding more. A Colonel having been engaged in counter-insurgency at close quarters says: having failed in their prime duty, the netas-babus palm of their responsibilities to the Armed Forces, enjoying their authority and  perks without any responsibilities; I have yet to see any neta-babu being shot in line of duty or being taken to court or losing their job for being incompetent. His suggestions are: remove AFSPA; fix the netas-babus for their failures; all police force must report to respective Governors, cutting out political interference, and; if civilian administration totally fails in their duties then they must be sacked and martial law imposes for specific period to bring the situation under control, followed by handing back control to the elected government as envisaged in our Constitution. Many would squirm reading this but this is general feeling at ground level.

Amidst all the aspersions cast on the Armed Forces periodically, some most vengeful by design, the public must acknowledge that their manpower base is the society itself. To this end, readers would do well to read up on an excellent article at the following link (https://scroll.in/article/827697/the-army-is-not-the-nations-conscience-keeper). The AFSPA, extra-judicial killings, FIRs etc are also debated periodically. The AFSPA was neither drafted nor demanded by the Army. It was debated in two Parliaments and enforced when Army is deployed in areas declared ‘Disturbed Area’ to restore writ of the state. As to human rights violations, Army has its own human rights organization and appropriate action is taken against defaulters. The problem arises when there is political interference with the neta-babu nexus shielding, even inducing such actions.

It is common knowledge that narcotics and gold smuggling from our eastern borders are as much through our western borders, if not more. The neta-babu-security forces involvement including of MHA-MoD in this loot is a reality. The Manipur killings have been in media for sometime but a particular case of 2010 of alleged dacoity and killings has been gaining notoriety because of political patronage (https://www.thehinducentre.com/the-arena/current-issues/article24790397.ece), which appears continuing as seen from the flurry of senior-level army postings in and out of northeast over the past one year. Remember the show-cause notice issued to a Corps Commander in northeast by then Army Chief, now MoS (EAM), General VK Singh, in 2010 in this context? The officer signing the covering letter to the show-cause notice, Brigadier LI Singh,  was ‘fixed’ on trumped up charges. Although he won his case with full redress in Delhi High Court two years back, the babu-neta-military nexus has ensured the follow up case for issue of executive orders keep dragging in the Armed Forces Tribunal to-date.

In an environment where the CBI top hierarchy is under investigation for corruption and a senior R&AW officer posted in Dubai is under surveillance (as per the grapevine poor guy only demanded measly Rs 5000 crore to clear a former Union Minister from an inquiry), there is need also to break the neta-babu-military nexus indulging in corrupt practices. As for the issue of AFSPA, any dilution will be detrimental to deployment of Army. The Disturbed Area notification must be removed, ending prolonged deployment of Armed Forces in counter insurgency. Let the Home Minister and the concerned States tell the Supreme Court they cannot govern with police forces; then let the Supreme Court give directions. The civil administration can continue with FIRs but the Arrny should simply ignore them – let the administration approach the Supreme Court in this regard rather than the Army approaching SC. With regard to soldiers being killed by stone-pelters, there should be no hesitation in retaliation by fire if the Army Chief says they are same as militants. If the government still is shaky for votes and wants to take shelter behind the human rights cabal and the judiciary, let it request Sri Lanka for a Sri Lankan Peace Keeping Forces who would sort out these 4-5 districts of J&K in no time.

4 thoughts on “Soldiers Stoned to Death – Is the Nation Shamed?”