So Where’s the Daesh? 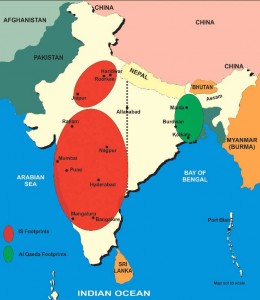 If some of those in the media, research and security establishment are to be believed Daesh or ISIS, as it is also known, is right here at our doorstep. As proof they point to reports on those who have recently succumbed to Islamic radicalism in Kerala, Maharashtra, Hyderabad and elsewhere and are hell bent on spreading its venomous teachings here. Even the recent turmoil in Kashmir, some suggest, can be attributed to Daesh.

While radicalism is certainly a matter of serious concern and necessary steps initiated to stop its spread, primarily with the assistance and intimate involvement of the Muslim community itself, and especially their religious and other prominent leaders. However, we should not be particularly concerned with those youth, including the twenty one odd from Kerala, who have fled their homes and disappeared, ostensibly to join ISIS in Syria. There is much to be said for their poor sense of timing and lack of sensibilities, as they try and join Daesh, which is in its death throes in its current avatar.

Their leadership has been badly decimated, territory occupied by them is being rapidly liberated and their army is being defeated in engagement after engagement. Soon they will have little choice but to scale back from the civil war, they had earlier appeared to be winning, to the insurgency phase. Unfortunately for them, most of those who had the misfortune to be governed by them and have seen their predilection for savagery and violence are unlikely to support them. This is certainly bad news for them as no insurgency without popular support can ever last. In such an environment the Indians who have joined Daesh will find themselves in an untenable situation as they will be unable to merge within the local community, even in those pockets that continue to remain supportive of Daesh ideology and its insurgent fighters. Their days are surely numbered and their return home unlikely, which while tragic for their families, will not draw much sympathy here.

In no way is it suggested that the ideology of Daesh will also be eliminated as the organization slowly disintegrates. Far from it, sadly radical Islam is here to stay, and has spread its tentacles through all countries that have settled Muslim communities worldwide. Radicalism of any kind brings together kindred spirits not just through ideological convergence but also perceived or actual discrimination members of a particular community, ethnicity or even class believe they have been subjected to.

So, attacks such as the ones in Dacca, Nice, Brussels, Istanbul and elsewhere in the name of Daesh will continue, probably for decades and protective measures treated as the new normal. They will be either in the form of “lone wolf” attacks, carried out by radicalized individuals with no logistics or other help from any group, or by local groups within that country. State sponsored terrorism, of the kind we see against us by Pakistan, is being increasingly frowned upon by the international community. It is only a matter of time before sponsors feel the heat of international opprobrium and see the sense in halting such attacks.

We need to understand the fact that lone wolf attacks have immense impact on the psyche of the local populations in the West because of the comparatively lower populations there and the emphasis placed on the value of human life. In our context, where hundreds die in accidents and violence daily, a lone wolf attack will certainly cause temporary consternation, but will give way to news of a bigger tragedy the next day. Thus while the developed world concentrates its resources on countering lone wolf attacks, which appears to be a virtually impossible task, we can afford to treat such a threat with much more diffidence.

However, we need to initiate necessary steps to prevent terrorist groups from being able to operate in our urban areas. While enhancing our intelligence gathering, dissemination and sharing capacities are important as is the upgradation of our response capabilities; our primary focus has to be on prevention. We have been extremely fortunate that the interpretation of Islam by Indian Muslims has been very different from that of its Wahhabi interpretation in the Middle East or even in Pakistan. We, however, need to be conscious of the fact that there are seven million expatriates of Indian origin in the Middle East, some of whom are likely to succumb to its militant ideology.

Constantly harping on the threat from Daesh gives our security establishment the ideal handle to scare us with. It allows hem unlimited powers as well as helps them avoid accountability on the pretext of having warned us earlier. However to avoid Daesh establishing itself inside our borders requires that the government continue to act with equity and empathy towards our minorities.

This requires the Central and State government take firm measures to protect our minorities from rogue elements within the majority community who are opposed to concessions of any kind being given to them.

At the same time secularism cannot continue to be seen as an attempt to entice minority votes through tokenism. This is as much applicable in Jammu and Kashmir as it is in Gujarat and elsewhere and must be the essential ingredient of our governance model, if we are to avoid the trap of intercine conflict that Pakistan finds itself in.

4 thoughts on “So Where’s the Daesh?”