Sikorsky Aircraft Corporation, a United Technologies company and the largest helicopter manufacturer of the world reiterates its commitment to the Indian market and recognizes the aerospace potential within the subcontinent. Acknowledging the commitment, Sikorsky has constituted the first ever “The Breakthrough Market Award”. This symbol of recognition was presented to AVM (R.) AJS Walia, MD, India and South Asia, Sikorsky Aircraft, at the World Wide Sales Conference held at Palm Beach USA recently for his accomplishments for tireless efforts, leadership and guidance- combined with his tremendous knowledge of the commercial and military market. 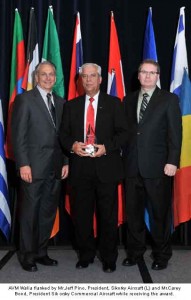 Accepting the award, AVM (R) AJS Walia, MD, India and South Asia, Sikorsky Aircraftsaid, “I am honored to receive this award. It feels great to be recognized for our constant endeavor to establish Sikorsky in the Indian market.” He further added, “There has been a boom in India’s civil aviation market making it among the fastest growing in the world. It has persuaded us to form JVs and partner with local corporate.

Today Sikorsky is expanding its presence in India by teaming with local industry to cater to the aerospace needs of the Indian government. The market’s positive reaction to Sikorsky helicopters comes post the introduction of first flight in India in the year 1954. Sikorsky helicopters have now become a known name for the defense forces. Sikorsky has been shortlisted by the Indian Navy for its requirements of 16 MRH helicopters. In addition to this the company has recently sold VVIP helicopters to India and has also signed a contract with the Maharashtra Government to deliver an S -76C++ helicopter for VVIP transportation. Having identified this potential within the Indian market, Sikorsky has even appointed a regional head at its Corporate HQs in Stratford-CT-USA for its India operations.

Sikorsky S-76 has also been considered by the Maharashtra Police department for homeland security purposes. It will join a growing fleet of Sikorsky helicopters operating in India or on order by Indian customers, including other S-76 family aircraft and lightweight S-300 and S-330SP helicopters.

All these initiatives in the commercial and military aerospace sphere have been mainly possible due to the persistent efforts of AVM AJS Walia who has been rightfully awarded The Breakthrough Market Award.