Significance of the New Baghdadi Video 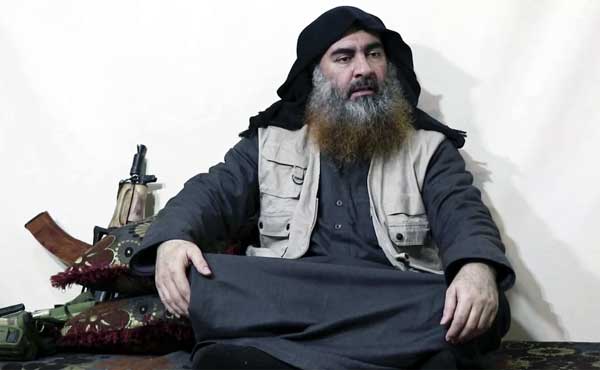 Five years after he stood at the pulpit of the al-Nuri Mosque and declared a new Caliphate, ISIS leader Abu Bakr al-Baghdadi reappeared in a rare video uploaded and dissemated by the group’s media front. Coming at a time when the group has lost full territorial control in Iraq and Syria, and is steadily losing ground elsewhere, the new video insinuates the continued relevance of the terrorist group. However, it is this continued thread that is also the biggest contrast between the group’s previous and latest videos. While the previous videos depict a burgeoning Islamic caliphate which had territorial control over large swathes of land and held captive the world audience through its audacious violent actions; the new video shows the remnants of a defeated group holding by its nails for any relevance in the world that crushed it. As I argue below, the remarkable shift from a well-poised to a roughened leader image of al-Baghdadi in the recently launched video is intended to show the new direction of the group, aiming to draw recruits and proclaims that the continued existence and relevance of ISIS to the world.

As with the group’s other outreach efforts, the video is strategically made and distributed. Sunday 28 April 2019 saw a fury of activity from the groups’ ‘al-Furqan Media Foundation, the group’s media arm largely dedicated to producing leadership speeches[i].’ The al-Furqan Media Foundationhad been effectively silent in making and decimating videos for ISIS since July 2016[ii], when it had last made a video depicting the new organizational dynamic of the group, such as the provincial organization, departments, and other structural features of ISIS. Given the relative laxity in the media group’s working in recent times, the spike in activity seemed unusually energetic.

But on Monday, it all made sense.  The al-Furqan Media Foundation released a new video featuring the long-evasive leader of the Islamic State, Abu Bakr al-Baghdadi. Titled, ‘In the Hospitality of the Leader of the Faithful’[iii], we see al-Baghdadi sitting in an Arab-style room, cross-legged and leaning on cushion, with his rifle propped against the wall next to him. In lecturing three masked men sitting before him of recent events and the continued role and relevance of ISIS, al-Baghdadi calmly assures his group of followers that the battle is far from over. “Our battle today is a battle of attrition, and we will prolong it for the enemy, and they must know that the jihad will continue until Judgment Day,” he said in the video[iv].

The video’s relevance lies not only in what it mentions, but rather the timing of the video, the creative visualization in the making of it, and most importantly, the manner of its dissemination, which alludes to the future direction and working of the group.

In taking a leaf from Osama bin Laden’s book, al-Baghdadi refers to many recent events to show that this is a recent video. It tells the world that he, the leader of the international terrorist group called the Islamic State, is aware of, and keeps note of the various developments around the world. At the same time, he also mentions various jihadist by their names, emphasizing on Western or foreign jihadists. In commending their ‘great work and efforts’ in the group’s activities and struggles in the Levant, al-Baghdadi is able to restore confidence in his men who are absolutely devoted to him.He reiterates that the caliphate was not abandoned, it was conquered, and that any military victory by invading forces will be temporary[v]. The video therefore not only shows that Abu Bakr al-Baghdadi is alive, but also that he is aware of the work and the sacrifices of his men. To prove his point, he then accepts bayat or pledge of allegiance from terrorist groups from Mali and Burkina Faso, and promises retribution and violence in multiple new territories. For an ardent follower, the video and his leader’s words can come as a soothing balm when they are only losing territory, men, and are being targeted by the world’s authorities. They are now ready to fight again.

The video also comes just before the start of Ramadan, the holy month for Muslims worldwide. Ramadan, while supposed to be the month of prostration and absolute devotion, has come to be the month of escalated violence for all jihadist terrorist groups since many years. If al-Baghdadi is successful in inspiring not only his current followers, but also the returning jihadists with his sermon, it is possible that we can expect a spike in terrorist incidents by these returning jihadists in the next few weeks.

The most interesting thing in my opinion is the image of Baghdadi himself. In a sharp contrast to his previous ‘sightings’ and images, where he can be seen as a poised, dignified leader of an expanding caliphate, wearing expensive watches, he is now shown to be rugged. Gone are the days of careful image maintenance and proper grooming. Abu Bakr al-Baghdadi is no longer the leader of a state. He is now categorically a roughened insurgent fighter, fighting alongside his men in the new battlefields. ISIS is now a terrorist group again, focused no longer on maintaining territorial control and administration in an area, but on fighting. This is starkly visible in his handing out of packages to his men towards the end of the video, marked by notions of wailayat in Turkey, Yemen, and Somalia. Abu Bakr al-Baghdadi’s rifle, placed within easy reach is ready for action. And so are his men – worldwide. This is the message of the video.

[ii] IS Video Focuses On Structure Of The “Caliphate,” Provinces And Committees Inside And Outside Iraq And Syria, SITE Intelligence, 06 July 2016.