Siemens: The digitalization of submarine development 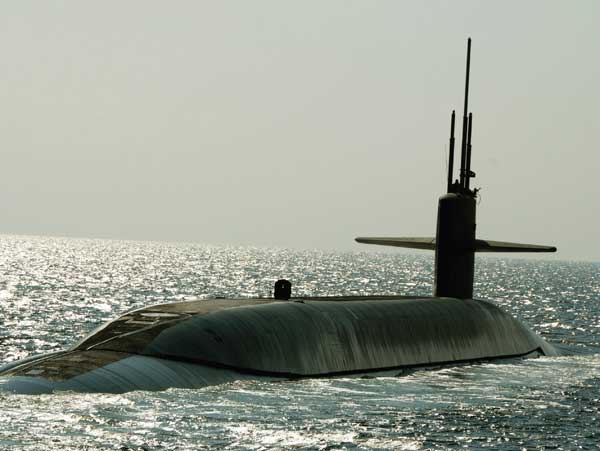 The demand for submarines, both nuclear powered and conventional, has never been greater as nations around the world seek affordable and reliable designs that meet national defense requirements. However, the cost and complexity of modern submarines are not compatible with most country’s defense-budget projections. Thus, submarine developers are seeking technology solutions that will enable shipyards to build these crucial assets on budget and on time with the operational performance and lifecycle durability and availability to satisfy acceptable total-ownership-cost (TOC) goals.

The cost and complexity of modern submarines are not compatible with most country’s defense-budget projections. Thus, submarine developers are seeking technology solutions…

The integrated product development environment (IPDE) has emerged as the solution to this vexing challenge for many of the leading submarine shipyards. The IPDE is a highly integrated and synchronized environment that can be used to establish harmony and fidelity among a vast community of designers and engineers as well as production operations, purchasing and suppliers. Thus, diverse and dispersed teams can work in parallel with confidence that they have the correct system and component requirements and are working on the latest design and configuration changes. Moreover, 3D models of every compartment and system is available for production teams to optimize material flow through the shipyard as well as assembly, initial system light off and sea trials.

The IPDEs that are being implemented for submarine development are far more sophisticated than their predecessors, having been validated in the most challenging automotive and aerospace environments, offering shipyards unprecedented breakthroughs in total productivity as well as submarine performance. In the future, these benefits will be extended across the entire supply chain and drive down the total cost of ownership of these crucial strategic assets. 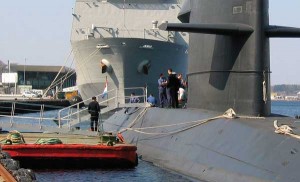 In the 1980s, the first generation of computer-aided software entered the world of submarine development and offered designers and systems engineers 2D images of submarine arrangements, systems and structures. Concurrently, computer-aided software engineering tools offered specific disciplines tools to automate repetitive analyses: hydrostatic, hydrodynamic, stability, finite element analysis, etc. Each tool set offered teams the ability to improve their productivity and optimize their processes, but multidiscipline engineering and operational alignment were labor intensive and paper-based, and drawings were still the medium for transferring design intent to production teams and suppliers. These improvements in productivity in design and engineering did not preclude the need for large, highquality organizations to constantly check and recheck production plans and decisions with drawings, while an inexorable plethora of changes were being processed throughout the detailed design and production phases.

Further challenging this already demanding environment were countries that wanted to build a modern submarine fleet, and jointly produce them in a local shipyard to ensure homegrown companies could provide complete lifecycle repair and support, and enable their citizens to participate in programs that supported national defense.

There was some improvement in performance for submarine programs that depended on this generation of new software technology, but there were also disappointing results…

In the 1990s, a new generation of software emerged with broader and more comprehensive solutions and the first versions of commercially developed product development management (PDM) systems were implemented. The first PDM systems offered a more disciplined and automated solution to change and configuration management, which was exactly what the shipbuilding and aerospace industries needed as the scale and complexity of new designs was growing exponentially and there was no end in sight to the relentless flow of design changes. No longer was it reasonable to assume that this could be coordinated and synchronized across a major enterprise without the help of software to control and manage the process.

The 2D CAD systems gradually were replaced by 3D systems, which enabled the digital mockup (DMU) of complex ship models as well as the digital simulation of material flow and assembly processes throughout a shipyard. Digital simulations of existing shipyard workflows and processes produced double-digit improvements in existing shipyards and even greater improvements in new greenfield shipyards in which processes and workflows could be simulated and optimized before the shipyard was even built.

There was some improvement in performance for submarine programs that depended on this generation of new software technology, but there were also disappointing results; for instance, programs fell behind schedule, were over budget and did not always meet requirements and/or performance expectations. It was clear from lessons learned in other industries that for shipyards to achieve transformational results, the next generation of software technology for shipbuilding would have to be more than an information technology (IT) project. It would require the dedication and commitment of all levels of shipyard leadership. As one executive put it, “Change is not easy and the last thing that engineers want to do is give up the tools that they know and love for something new and better.”

This program would be led by an international coalition with three primary partners, numerous secondary partners and a global supply chain of up to 600 companies.

But change was a prerequisite for satisfying future requirements and budgets, and there were encouraging examples from other industries that were realizing significant breakthroughs in productivity with a new generation of software technology, process improvements and team training.

In 2001, the United States Department of Defense launched the largest program in history to concurrently develop three versions of the next generation of advanced supersonic multi-role aircraft for the Air Force, Navy and Marine Corps as well as potentially 30 allies around the world. This program would be led by an international coalition with three primary partners, numerous secondary partners and a global supply chain of up to 600 companies. Before they were awarded the contract, the leadership of this program decided that this would require a completely different approach to the way that they would design, develop, produce and sustain a fleet that could ultimately approach more than 4,000 aircraft.

For this program, secure, global, efficient collaboration was paramount. Automated configuration, change and effectivity management for each aircraft serial number was crucial. Major modules would be assembled in several locations and final assembly and testing would be at sites in the United States, Europe and Asia. Cycle time for each aircraft was to be reduced from 15 to five months and eventually the program was projected to deliver over 200 aircraft per year for the next 20 to 30 years. Finally, the coalition would be responsible for sustaining the fleet while meeting stringent new performance-based logistics metrics. Today that coalition has an integrated product development environment composed of 30 project teams at 140 sites in nine countries. There are 112 workflows that are used to manage changes (24,000 in 2009 alone) and 70,000 secure transactions are managed and archived weekly that document all work with international participants.

The IPDE for this seminal program has become the standard for complex, international co-production of complex aerospace and shipbuilding programs. The digitalization of this program has ushered in a new wave of leading digital shipyards in Korea, Europe and the United States. These digital shipyards have been enabled with a new generation of software technology that offer an open, scalable and modular portfolio that can be used to readily and rapidly transform an existing infrastructure to improve design and engineering productivity. They can also be used to enhance production, construction and sea trials productivity for the original equipment manufacturers (OEMs) as well as members of their supply chain. The result is a highly-integrated enterprise that is better aligned and more efficient and capable of producing better submarines; for example, vessels that are on time, on budget and on performance, the holy grail of any naval program.

In the 2000s, it is also worth mentioning examples of fleet in-service configuration management initiatives that were implemented to improve safety or service and support productivity. This trend is growing in importance as fleet owners and operators seek to reduce the cost of ownership of current and future fleets.

The emergence of product lifecycle management (PLM) portfolios that are tailored to the unique challenges of developing advanced submarines, both nuclear and conventionally powered, are transforming the most advanced shipyards in the world so that future fleets of submarines are more affordable, sustainable and reliable. The productivity projections from these new portfolios are crucial to meeting the constraints of current budgets, plus the commissioning of each new submarine is linked to the decommissioning of an existing submarine so that overall fleet readiness is not adversely affected.

The most comprehensive PLM for shipbuilding also have a new array of engineering software technology to analyze and improve the acoustic signature of submarines to satisfy crucial stealth requirements and composite software tools to suppress self-generated machinery noise.

The next step in the evolution of the submarine IPDE will be the extension of this digital platform to all partners, members of the supply chain and fleet support teams to maximize total enterprise productivity and reduce the total ownership cost. This trend is already underway in some leading shipyards. 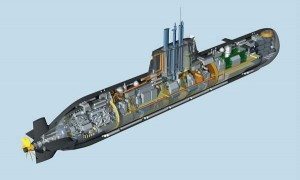 Future IPDE solutions will enable shipyards to more tightly integrate the complete enterprise with particular attention to the supply chain and service lifecycle management, both top priorities today. Strategic partners will continue to collaborate and share data through a highly secure private network with International Organization of Standardization (ISO) standards such as the JT™ data format to enable the building of 3D multi-computer-aided design (CAD) models. A cloud-based solution will offer the rest of the supply chain access to the information and data that they need from the master data file to be an efficient yet virtual member of the team.

In a similar manner, service lifecycle management will be coordinated and managed by the lead shipyard or the overall service provider with supply chain members and fleet support staffs. Additionally, in-service lifecycle performance such as mean-time-between failure, system reliability metrics and related data will be carefully documented for all systems and components by class and hull number so that future fleets can benefit from lessons learned and many systems will not need to be re-engineered for future classes of submarines.

Today you can make the case that there are at least seven major shipyards in the world that have undergone a significant digital transformation, at least two in each of the major markets: Asia Pacific, the Americas and Europe. In every instance the shipyard was already recognized as a world leader in specific classes of ships, and in several cases, the shipyards were highly diversified; for example, building a wide variety of ships for commercial, military and private yacht owners. But the leaders of these shipyards recognized that they needed to continue to innovate and improve if they were going retain their leadership position that resulted from the digital transformation that is underway. It would be safe to say that the number of shipyards that achieve a significant digitalization in the next decade will double or triple worldwide as other shipyards seek to emulate the performance that the first seven shipyards have already achieved.