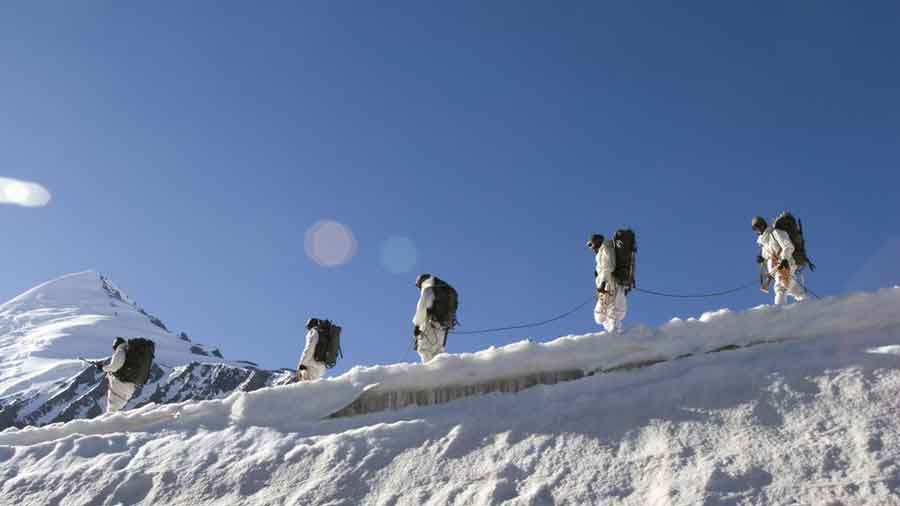 Much water has flown under the bridge since 2nd October 2012 when Atlantic Council of Ottawa put out the news bulletin titled “India-Pakistan experts agree on confidence-building measures at Lahore meeting”. The bulletin stated that since November 2011, militaries of both India and Pakistan held several rounds to boost confidence building measures, these meetings having been held in Dubai (20-21 November 2011), Bangkok (23-25 February 2012) and Lahore (23-25 September 2012) and that additionally, working group meetings took place in Chiang Mai (21 April 2012) and Palo Alto (30-31 July 2012).

With respect to Siachen, the bulletin said, “….as a part of the comprehensive resolution of the Siachen dispute, and notwithstanding the claims of each country, both sides should agree to withdraw from the conflict area while retaining the option of punitive action should the other side renege on the commitments”.

Notwithstanding the fact that above means withdrawing from Indian Territory and in effect acquiescing to the absurd Pakistani demand for the LC be to drawn from NJ9842 directly to KK Pass, inclusion of the following paragraphs too are ridiculous to say the least:

What is the logic (read wisdom) of this when Indian posts dominate the crest-line of the Saltoro Range and Pakistanis are sitting much below to the West?

The Atlantic Council of Ottawa bulletin listed out all the names of both sides experts groups (incidentally Pakistan refers it as good as Track 1), chaired by the following:

While the government remained in the background, a panel consisting of two members of the Track II Team under a former Ambassador made efforts to justify withdrawal from Siachen

As the above news bulletin hit the internet, there was plenty discussion in India. While the government remained in the background, a panel consisting of two members of the Track II Team under a former Ambassador made efforts to justify withdrawal from Siachen at India International Centre but received a mouthful from the audience including from a former Army Chief and journalists present. It began to dawn on the public why in the preceding weeks the façade of Siachen having no strategic significance had been so carefully orchestrated in the electronic and print media, particularly obfuscating the strategic importance of the Saltoro Ridge in relation to Gilgit-Baltistan, Northern Areas, Shaksgam and the Wakhan Corridor.

Thereafter, the web vent viral as expected and so did discussions. The good part is that individually the Track II members now admit that Siachen (read Saltoro Range) is indeed of great strategic significance. The Indian Co-Chair also admits privately that the China factor including the cumulative impact of Chinese presence in Aksai Chin, Shaksgam and proposed leasing of Gilgit-Baltistan region to China by Pakistan for 50 years (as reported in both Pakistani and US media) had not been taken into account at all. The bad part is that majority Track II members continue to maintain there was no government missive on Siachen and that they took it ‘upon themselves’ to solve the Siachen ‘tangle’, while few privately admit that there indeed was a missive to work out ‘how’ of the withdrawal without questioning the ‘why’ and ‘when’.

Majority denying any government directive is apparently to continue enjoying such foreign jaunts as coming clean with facts could remove their names from hierarchical good books. This became more obvious when a journo member of the Track II Team with military background made pointed personal attacks on individuals highlighting strategic advantage of Siachen and criticizing withdrawal, saying they were aggrieved for not being part of the Track II and thus denied benefit of foreign trips – as if bending backwards even at the cost of strategic disadvantage to the country is the only way to travel abroad. The bad part also is that while the Co-Chair changed tack from this Track II Team being a “Private Body” to group of “Private Individuals”, another member (army veteran) wrote in Salute magazine, “The uniqueness of the Ottawa dialogue is that this is exclusively military-to-military Track-II process where for once diplomats take a back seat.”

Majority denying any government directive is apparently to continue enjoying such foreign jaunts as coming clean with facts could remove their names from hierarchical good books.

The continuing mystery was that when every Army Chief (including General Bikram Singh) had categorically stated that the Army was not in favour of withdrawal from Siachen (read Saltoro) and a former Army Chief even gave it in writing to the government that post withdrawal, it would not be possible to retake Saltoro Range if re-occupied by enemy, why did this Track II Team (especially the ‘eight’ former Indian Military officers’ including the Co-Chair out of the overall eleven strong Indian experts group) agree to withdrawal, notwithstanding reports that a select two-three members were briefed by the NSA prior to proceeding to Lahore.

The questions that the Track II Team got bombarded eventually ranged from:

With the wedge between India and Pakistan (Saltoro Range) abandoned in this sector, how many new Divisions will India need to defend Ladakh, at what cost and what will be the cost of establishing the new defence line;

In 1990’s, Musharraf, much before becoming Army Chief, gave a presentation to Pakistani Defence Ministry that the per capita availability of water in Pakistan from 6000 cusecs of water in 1947 had already come down to 1000 cusecs per capita and this was reason enough for Pakistan to annex J&K. Consequently, Pakistan started claiming the LC from NJ9842 directly to Karakoram Pass so that entire Siachen Glacier becomes Pakistani territory.

Yet, our military heavy Track II Team (8 in overall 11 members) wants India to withdraw from Siachen, which is one of biggest fresh water reserve that India has.

India constitutes 16% of world population but has access to only 4% of the world’s fresh water sources. By 2025, we will be a ‘water starved’ nation if we do not manage water on war footing (of which there are no apparent signs). Yet, our military heavy Track II Team (8 in overall 11 members) wants India to withdraw from Siachen, which is one of biggest fresh water reserve that India has. A major reason why China took over Shaksgam is enormous fresh water sources. Ironically, India gives 80% of waters to Pakistan under the Indus Water Treaty of 1960 – far in excess to global water sharing norms that are dependent on the size of the basin; we should actually give just 50% of what we are giving.

We may not be advanced in stealth technology and Japanese may have developed  invisible cars but our archives and files have hidden cuckoo birds since ages. Besides, if Chinese are unsuccessful in capping social media can we? So, it now emerges that during 1992-1993, the Narasimha Rao government, with him also holding the Foreign Minister portfolio, in a moment of weakness gave political signals of possible withdrawal from Siachen. Ignoring military advice has been the bane of India’s blunders, this is not the only misdemeanor / strategic blunder that Narasimha Rao Government did.

keep the Experts Group / Track II Team military heavy so that eventually it gets interpreted as ‘military advice’; keep playing for time with ploys like ceasefire, authentication of ground positions / AGPL and the like; spring the surprise on the nation once the stage is set.

How does one Congress led Government align the public with an arbitrary and strategically disadvantageous decision taken by another Congress led government of the past? It would have been so easy if military advice was sought but that is not the culture in India and the advisory coterie perhaps thought of steps that could pull wool over the eyes of the public: play out Siachen as a wasteland with nil strategic value, costly affair, weather casualties without comparison to Indian Army deployments elsewhere; get a set of gullible military veterans who agree to work out ‘how’ to demilitarize without raising any questions on ‘why’ and ‘when’; keep the Experts Group / Track II Team military heavy so that eventually it gets interpreted as ‘military advice’; keep playing for time with ploys like ceasefire, authentication of ground positions / AGPL and the like; spring the surprise on the nation once the stage is set. If a peace prize comes in the process all the better as that would optimize on capitalizing on the human of the state of mind in which elation has the better of rational judgement.

What actually needs to be done is simple – bend it like Beckham – read imitate your neighbours. Pakistan and even Musharraf are in the forefront championing demilitarization while simultaneously harping on plebiscite in J&K. UN Security Council Resolution of 1948 had asked Pakistan to demilitarize from J&K – remove ‘all’ security forces. Did they? China having got Tibet on a plate has in recent years sprung the surprise of claiming Arunachal Pradesh as “South Tibet”. There numerous other examples besides the million dollar question – on what basis are we rewarding Pakistan at cost of our national interests?

Saying no is so very simple. The circumstances under which whatever political signals were given during 1992-1993 have drastically changed on following major counts: Chinese had not made strategic forays in Pakistan / POK; Pakistani infiltration, terrorist strikes and anti-India terrorist infrastructure was not of that magnitude as it is today; China and Pakistan had not been meddling with insurgents in India’s hinterland (Maoists,n otheast insurgents) as they are doing today.

The government should muster the courage to tell Pakistan (and the US if necessary) that India will not withdraw from Siachen. If considered necessary, Pakistan can be told that we will not roll down the Saltoro Range to attack them, till they behave.