Home  >  News  > Geopolitics  >  Should India work with the United States to stabilise Afghanistan?

Should India work with the United States to stabilise Afghanistan? 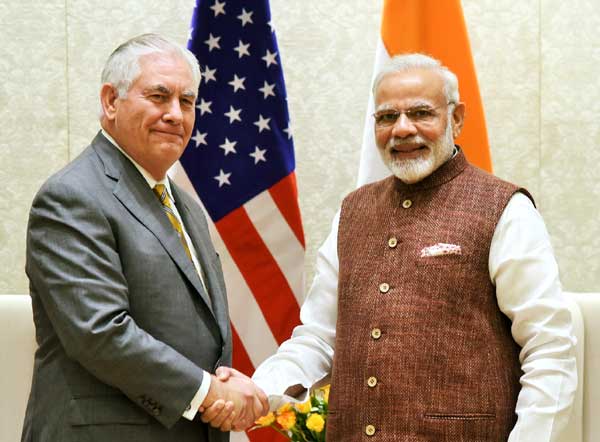 It is a rare coincidence that on October 24 soon after Afghan President Ashraf Ghani concluded his “one-day working visit” to Indian capital, the United States Secretary of State Rex Tillerson, who had an unannounced secret parleys on Monday (October 23) with the former in Kabul, has also arrived in Delhi to meet external affairs minister Sushma Swaraj and Prime Minister Narendra Modi on Wednesday.

In fact, there has been a spate of diplomatic activities involving the three countries over the last one month and half. In their respective speeches on different occasions during the period, US President Donald Trump and Secretary Tillerson have called for a substantive role for India in Afghanistan.   This period has also witnessed Afghanistan’s chief executive Abdullah Abdullah and foreign minister Salahuddin Rabban being in Delhi and India’s national security adviser Ajit Doval flying to Kabul.

The hectic diplomatic parleys have taken place at a time when relations between Afghanistan and Pakistan one the one hand and between Pakistan and the United States on the other have shown some strains.  The Trump Administration’s South Asia policy makes it obvious that Washington now is openly admitting that Pakistan harbors terrorists, who in turn, go to every possible extent of ensuring US military failures. In the same vein, the US wants a bigger role of India in Afghanistan. To quote President Trump, “Another critical part of the South Asia strategy for America is to further develop its strategic partnership with India — the world’s largest democracy and a key security and economic partner of the United States.  We appreciate India’s important contributions to stability in Afghanistan……. and we want them to help us more with Afghanistan, especially in the area of economic assistance and development.  We are committed to pursuing our shared objectives for peace and security in South Asia and the broader Indo-Pacific region.”

Meanwhile, the Trump Administration has resumed unilateral strikes inside Pakistan on terrorist-hubs aimed against Afghanistan. It has threatened to impose sanctions against Pakistani individuals and entities. What is more, it has also indicated to reduce or cut-off of US economic and military aid.

But then Pakistan is not sitting idle. Whether or not it convinced Tillerson, who made a stop-over at Islamabad on his way to Delhi, about its indispensability to the United States because of its geography, the fact remains that the Taliban and other Islamic fundamentalists that it nurtures have intensified their attacks in Afghanistan. On Saturday, at least 15 people died in a suicide bombing in Kabul, which targeted army officers at a military academy. It followed suicide -attacks on Friday that killed nearly 60 people at two mosques: a Shia mosque in Kabul and a Sunni mosque in the central province of Ghor.

Terrorism has always been an important instrument of Pakistan’s foreign policy. The very fact that over 8000 American troops are still on Afghan soil, the US has to send arms and other provisions for them. There are three possible routes for this purpose, through Central Asian Republics (Tajikistan) via Russia, Iran and Pakistan. And here, as Russia and Iran are more or less enemies of the US, it is only Pakistan, an “ally”, that provides the safer and cheaper land route or supply lines to Afghanistan as far as Washington is concerned. Of course, in the process, Pakistan earns a huge sum – billions of US dollars as economic and military assistance every year. Besides, the dominant section of US foreign policy mandarins have  also bought the Pakistani logic( in fact, it is blackmail), that without a strong Pakistan Army, which, in turn, needs American money and weapons, Pakistan’s nuclear weapons may be reaching the Taliban and al-Qaeda.

The current American predicament needs to be seen in the above context. Since the Americans cannot afford to abandon Afghanistan to the Islamic fundamentalists like the Taliban for their own security in the mainland, the best course will be if countries like India also help them in Afghanistan militarily.  But then Americans realise that it is very difficult for any Indian government to send its troops to fight another country’s war. Except the disastrous decision of the former Prime Minister Rajiv Gandhi to send troops to fight the Sri Lankan civil war in 1987, Indian “boots’ have  never been on the foreign soil unless the troops were parts of the United Nation’s Peace-Keeping Forces. Reportedly, defence minister Nirmala Sitharaman had made this policy very clear to her American counterpart James Mattis during the latter’s India visit recently. However, Sitharaman did pledge to help Afghanistan ‘build infrastructure and stamp out terrorist safe havens.” How?

It may be noted that  Indian Afghan policy  has covered four broad areas: infrastructure projects, humanitarian assistance, small and community based development projects, and education and capacity building programmes. Within this framework India has already invested $11 billion in Afghanistan. It has further pledged another $2 billion for new projects. Afghanistan is now the second largest recipient of Indian aid just behind Bhutan. In fact, India is Afghanistan’s fifth largest bilateral donor after the United States, the United Kingdom, Japan and Germany.

India and Afghanistan signed in 2011 the Strategic Partnership Agreement (SPA) to guide the contours of their overall relations. The only military dimension of the SPA has been New Delhi’s pledge to increase training for Afghan soldiers and police within India. And here, there are some scopes for more intense interactions, something the Americans will like very much.

As Alyssa Ayres, Senior Fellow at New York-based Council of Foreign Relations (publisher of the world famous Foreign Affairs journal), has argued, India’s expertise in the arena of civilian security—especially in training and skill development—could be helpful to Afghanistan. Greater budget support for the Afghan National Security Forces by India would be welcome. In addition, the kind of training capacity on issues like countering improvised explosive devices, or security support functions like literacy training, logistics and supply-chain management, or military medicine, to name just a few, present possibilities for Indian expertise to help the Afghan security forces.

All this, Ayres argues, should be along with the continuing Indian involvement in Afghanistan’s economic and social development-projects. In fact, she has been suggesting that the US should ensure that Pakistan does not have the veto power in any multilateral negotiations on Afghanistan with regard to any Indian role in that country. The Trump Administration seems to be agreeing with this school of thought. All told, Indo-US partnership in Afghanistan is acceptable not only to all the groups within that country but also other major powers, including Russia and Iran, who matter there. Even Taliban may not mind India’s increased role, if a recent feature in the New York Times is any indication.

However, should India play a more active role in Afghanistan than what is the case at the moment? Almost all the leading Western powers and Japan want India to play a leading regional role in the Asia-Pacific region that includes Afghanistan. But is India prepared for such a role? As Evan Braden Montgomery has pointed out in his recent book, In the Hegemon’s Shadow: Leading States and the Rise of Regional Powers   (Cornell University press, 2016), the US considered supporting India in the 1960s (in fact, one can argue that such support from the West came earlier in the 1950s as well) in the hope that India as the dominant power in the region would prevent China from creating its sphere of influence in South Asia. But India did not show any interest or was unable to assert such dominance, and the US lost interest.

Now the US wants India to play a much bigger role, not limited to South Asia but, as President Trump said the other day, in the entire Asia-Pacific region (he used the term Indo-Pacific). Is Prime Minister Narendra Modi listening?

One thought on “Should India work with the United States to stabilise Afghanistan?”