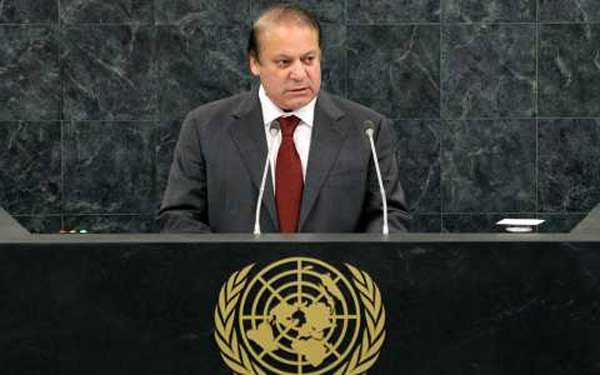 Pakistan Prime Minister Nawaz Sharif, once again, brought up the issue of Kashmir in the United National General Assembly (UNGA). He said that the “veil cannot be drawn over the core issue of Kashmir.” He called upon the UN to stand by its promise thereby hinting at the issue of plebiscite. In a blatant attempt at brinkmanship he said that “many generations of Kashmiris have lived under occupation accompanied by violence and abuse of their fundamental rights.”

…whether he (Nawaz Sharif) was speaking his mind or was merely reading out a script given by the Pakistan Army and its fundamentalist partners in Pakistan.

What is important here is to see whether he was speaking his mind or was merely reading out a script given by the Pakistan Army and its fundamentalist partners in Pakistan.

The foundation of this diabolic plan was laid immediately after the visit of the Pakistan premiere to India to attend the swearing- in ceremony of Prime Minister Modi. The visit had the media in raptures with talk of a new beginning where Kashmir will be sidelined in favour of building a larger trade based relationship.

The bold step taken by Prime Minister Sharif caused ripples of anxiety in the Pakistan army and its Jihadi partners led by the Lashkar-e Toiba (LeT). In this development they saw a burial of their Kashmir policy nurtured with great care over generations. Naturally, they were not ready to accept the development.

The efforts of the Pakistani Prime Minister were met by a spate of ceasefire violations and infiltration bids on the line of control between the two countries. The terror apparatus in India (Kashmir) was also energised into action; there were a large number of terrorist incidents in the Kashmir valley. There are no two views about the perpetrators of this violence against India.

The insecurity of the Pakistan army did not end here; the Nawaz Sharif tilt towards India and some other domestic compulsions led the Pakistan army to conclude that his wings would have to be clipped. This gave rise to the “Azaadi” and the “Revolution” Marches that managed to besiege the Prime Minister and the pillars of the state in Islamabad. The plan fell flat due to the absolute support that Nawaz Sharif got from other political parties. It is, however, a misfortune for the country that Nawaz Sharif had already lost his nerve. He is now toeing the line of the army and the fundamentalists to the hilt.

With the government of Pakistan firmly in their pocket the perpetrators of terror launched their second salvo towards disrupting the relationship between the two countries. This was necessitated by the fact that the government of India refused to be provoked by the mayhem unleashed along the line of control and in Kashmir and decided to go ahead with the scheduled secretary level talks in Islamabad.

The massive tragedy of floods that enveloped parts of Kashmir as also POK provided to the Pakistan army and its terror mongering partners yet another opportunity to carry forward their anti-India policy.

Scuttling the talks became a prime objective of these forces and they adopted a novel way of doing so. The Pakistan High commissioner to India was directed to call the Kashmiri separatists for talks in New Delhi before the secretary level talks. The ploy worked and the talks were stalled due to this offensive act by the Pakistan High Commissioner.

The massive tragedy of floods that enveloped parts of Kashmir as also Pakistan Occupied Kashmir (POK) provided to the Pakistan army and its terror mongering partners yet another opportunity to carry forward their anti-India policy. The natural disaster was courageously challenged by the Indian armed forces with extraordinary support from other organs of the state and the central government, non-government organisations, charitable institutions and above all the people of the region.

The enemies across used their assets in the valley to launch a massive campaign of misinformation to malign the effort put in by the security forces. Media was used extensively to give an impression that the effort made by civilians had been sidelined to give credit to the security forces. The puppet government in POK was made to issue statements requesting the United Nations to open up the line of control so that the people of Kashmir could be rendered “help.”

One cannot help being amazed at the gumption of the Pakistani establishment in orchestrating a media driven propaganda of this nature at a time when regions under its illegal occupation are suffering immensely. The Government of Pakistan and the Pakistan army have exhibited an indifferent response in providing relief to millions of people reeling under the unprecedented flood situation in POK. Sadly, POK has not yet recovered from the devastating earthquake nine years ago and now it is overwhelmed by a deluge.

It is common knowledge that Nawaz Sharif was greeted with chants of “Go Nawaz Go” when he went to address the people of the region and give to them false promises. The rally was prominently covered by a host of Pakistani television news channels and the chants were there for all to see and hear.

…it becomes apparent that ceasefire violations, infiltration bids and terrorism in Kashmir will witness an upswing in the coming months.

The final episode of this serial has now been played out in the United States in the backdrop of the UNGA meet. The Pakistan Foreign Office first took great pains to “leak out” to the media the intention of the Pakistani premiere to bring up the issue. Pakistan Foreign Secretary Ajaz Ahmed Chaudhary went on record to state that there is no reason for Nawaz Sharif not to raise the Kashmir issue in UNGA; definitely not the best of statements to make when the two countries are straining to bring back the situation from the brink.

It is proved beyond doubt that Nawaz Sharif in no longer in charge of the foreign policy of his government. He has forfeited the same to the Pakistan army and the fundamentalist forces. These forces have managed to get their belligerent Kashmir policy to the centre stage yet again.

As a corollary it becomes apparent that ceasefire violations, infiltration bids and terrorism in Kashmir will witness an upswing in the coming months. It would be best for India to take a pragmatic view of the development and prepare for the worst.