Shaheen Bagh: Much More Than Meets the Eye 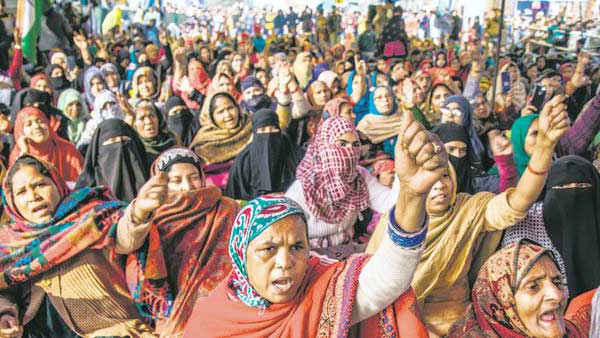 Shaheen Bagh has not only become a prominent landmark in Delhi but it has etched its name as an iconic movement in post- independence history of modern India. Ostensibly, Shaheen Bagh was chosen as a venue for peaceful sit-in protests by the Muslim community supported by the leftists and pseudo-liberals against the Citizenship Amendment Act (CAA) labelling it as anti-Muslim and a ploy to evict or detain Indian Muslims.

The very premise of the protest was wrong because CAA was enacted to grant citizenship and not to deny citizenship. The said Act had nothing to do with existing Indian citizens. But insisting on the fact that the right to protest was a basic right in any democracy, the organisers persisted despite the opposition from those who were inconvenienced with these protests. When confronted with the fact that CAA has nothing against Indian Muslims or why protest when the case is subjudice extraneous issues like police excesses, National Register of Citizens (NRC) and National Population Register (NPR) cropped in.

Suffice to note that both NRC and NPR are constitutional requirements and enjoy the legal mandate, it is a different issue that the government did not even issue any instructions about NRC but it was made an issue of protests. Certain distinct features of the protest are; the protests are led by the women both elderly and young, fluent anglicised  English speaking young girls and boys are projected as spokespersons and panellists (though the community claims to be educationally backward), Tiranga is carried and displayed prominently, patriotic songs are played in between provocative and hate speeches, media was allowed selectively, it provided political platform to a few selected political parties, ‘azadi’ and pro-Pakistan slogans are raised frequently.

It was hoped that after the initial anger and satisfaction of having used their democratic right of freedom to express the protest will subside as had happened in the past with such protests, it did not happen so. The protests became uglier and aggressive by the day. Soon, the sloganeering and placards began to divulge the latent agenda.

Prime Minister Modi assessed the agenda correctly when in a public rally in Delhi he termed the protests as a “Prayog” (an experiment). His prophecy was dismissed at that time as yet another election plank. But the fact was that a stage was being set for enacting a thoroughly planned and well written script to dismember India to justify the “Two Nation Theory.”

Opposition to CAA was just a front with much deeper evil aim and sinister design. Majority of the protesters did not even know ABC of CAA. When questioned they would parrot out tutored answers like ‘it is anti-Muslim’, ‘it would deprive us of our citizenship’, ‘we would be asked to produce documents which we don’t have’, ‘we are protesting to safeguard the future of our children’ and other irrelevant replies which had nothing to do with CAA. The slogans like “You divide, we multiply”, “Ek nahi, Anek Shaheen Bagh Banayenge”, are grim reminder of the fact that Shaheen Bagh is only an experiment to create nationwide mayhem.

What are the azadi slogans meant for? What Jinnah type Azadi means? Why pro-Pakistan slogans when the objection is against the CAA? Answers are not far to fetch. Provocative speeches by likes of Dr Kafeel Khan, Sharjeel Imam, Owaissi, Akbaruddin, Waris Pathan, Umar Khalid and many others proved that the protests were communal and made with a sinister design to engineer nationwide communal clashes with a view to plunge the nation into a civil war.

The jihadists and secularists have ganged together to unleash a revolution. They don’t openly claim it to be an “Islamic Revolution” but the real intent can’t be hidden for long since the actions speak louder than words.

In collaboration with the leftists and pseudo liberals who promote urban naxalism in India, the protests are being projected as a “Peoples’ Movement.” New terms like “inclusive nationalism” and “Muslim Identity” are contradictory and confusing. For the first time it is being claimed that the protests are being led by the Muslims themselves and they are no more influenced by those who always believed in using them as a mere vote bank but neglected the community as far as its uplift is concerned. Does this not ring alarm bells?

The language and rhetoric seem familiar when compared with pre-partition days when the demand for a separate Muslim nation was gaining ground. Is the slogan “Jinnah wali azadi” or “khoon se azadi” suggestive of that? The protests are not being used only to voice their anger over major issues like Triple Talaq, Scrapping of 370, Ayodhya Verdict and CAA but are also rewriting politics in India.

While on the one hand the protesters claim the protests to be “saviour of democracy” and “protection of the Constitution” on the other hand loud noises are made to say that we only believe in Islam and claim that Islam and democracy are incompatible. The fact is that an effort is being made to plunge India from clash of ideologies to clash of civilisations. The entire narrative is communal with evil design of breaking India, a grim reminder of “Bharat tere Tukde honge.”

How can they claim to be protecting the Constitution when they have almost defied the Supreme Court of India by refusing to cooperate with the mediators appointed by the Honourable Court to convince them to end the logjam?

A careful analysis of the speech of Sharjeel Imam who suggested cutting off Assam by blocking all roads leading to it compels one to take seriously the threat posed by ISI conceived “Operation Mughalstan” which aims to create a green corridor extending from Pakistan to Bangladesh by merging with them the whole of North and North East India. Are the anti-CAA protests which began from Shaheen Bagh as an experiment and spread across the nation being used as a test bed for the same?

By seeing the Shaheen Bagh protests merely through the prism of Delhi elections will be a grave disservice to the nation. Modi’s prophecy that it was not a coincidence but an experiment is proving true now?The arson, loot, stone pelting (trade mark of jihadi terror) and vandalism in North East Delhi well timed and synchronised with the visit of US President Trump is an ugly manifestation of this experiment.

All the while the organisers have been wanting the protests to become violent through an external trigger and later convert them into nationwide communal clashes.

A Luteyn journalist even went to the extent of tweeting a fake video showing a mosque set on fire. However, the mischief was caught sooner than later and action taken to remove it from social media before it could add fuel to the fire.  The organisers have partly succeeded with President Trump acknowledging that he has noticed it and The New York Times carrying the headline“India’s capital erupts with religious violence during Trump’s visit.” The lobbyists will now become active to paint India as an intolerant nation where the Muslim minority is being marginalised.

The major decisions taken by the present dispensation in national interest to resolve long pending issues which were being used for polarisation would be projected as asserting the majority Hindus rights over the minorities particularly the Muslims.

The short term and immediate aim of the protests has become very obvious. It is to destabilise the democratically elected popular government of Modi since BJP is perceived as the biggest hurdle in achieving their long term and ultimate aim of plunging India into a civil war leading to its breaking on communal lines. That is why they are reluctant to enter into any discussions on CAA/ NRC/ NPR or are unwilling to listen to Supreme Court mediators. There is a definite sinister agenda taking shape behind the cloak of Shaheen Bagh.

What next? Wait for another trigger to start communal violence, till then misuse the social media to spit communal venom through hate posts and also play a ‘victim card’ to gain global sympathy.

Kashmir may be used as another battle ground. The coming summer will be a big challenge for security forces in the Valley. The movement may shift base by exploiting latent anger among section of the Kashmiris. The government has not only to be vigilant and extra cautious but also ensure that immediate measures are instituted to meet the aspirations of Kashmiris post the reorganisation of the state.

To beat the evil aim and sinister design of the organisers and forces behind the game plan, the government needs to ban Popular Front of India (PFI) and arrest its leaders. The protesters and rioters need to be dealt with an iron hand rather than convert it into a political slugfest. The provocateurs on either side need to be leashed and jailed, if needed. Plurality and diversity of India which is its heritage needs to be preserved at all costs. The backbone of those plotting to break India needs to be crushed as the nation can ill afford another division.

5 thoughts on “Shaheen Bagh: Much More Than Meets the Eye”