Until today, the T-72 remains one of the most popular MBTs worldwide. Introduced in the 70s with a remarkably compact design, various modifications and upgrade programs (protection, night vision, etc) aimed at improving the combat effectiveness. However, the mobility of the vehicle typically remained at the original level, with a 780 hp engine, two separate manual transmissions and conventional steering with two manually operated brake levers. 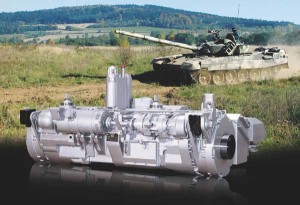 This driveline is the virtually unchanged for the T-90 which is considered as a modern tank but still uses two separate manual transmissions and the same old-fashioned steering system. The T-90 is equipped with a 1000 hp engine, but is no big leap forward in the mobility of the vehicle, as most of the 70’s design drawbacks persist: poor cooling system, slow manual gearboxes, difficult to handle for tired or inexperienced drivers, long vehicle downtime in case of repair, and a reliability which may fall below expectations.

But modern powerpacks for T-72/T-90 are now available. The French company SESM (member of the German group RENK, world leader in automatic transmission for tanks) offers a powerpack which improves drastically the mobility of the T-72/T-90 class. The powerpack fits into the existing chassis and only minor modifications are necessary on the inside. This way, the Powerpack is an option for new-production as well as for upgrade programs.

The Powerpack comprises a fully automatic power-shift transmission, a high performance cooling system designed for hot climatic conditions and an engine with a maximum power of 1200hp. Various engine options are available. The complete Powerpack can be exchanged in less than one hour in field condition, a big advantage for the logistics, and also improving fleet availability and reducing fleet operating costs. One standard Powerpack can equip a complete class of vehicles, including T-72/T-90 and their derivatives ARV, AEV, AVLB, etc…

The system is currently available in the new Malaysian MBT PT-91M (Poland).

This powerpack should be interesting for all existing and future users of T-72/T-90, as it overcomes one of the weak points of these tanks at reasonable investment. In return, it makes T-72/T-90 an attractive option for many years to come.