Russia has successfully completed the first flight test of its second Prospective Airborne Complex – Frontline Aviation (PAK FA), a fifth-generation fighter jet, which when fully developed, is intended to be the successor to the MiG-29 and Su-27 in the Russian inventory and serve as the basis of the Sukhoi/HAL FGFA project being developed with India. The aircraft, piloted by Sergei Bogdan, flew for 57 minutes and successfully achieved all goals set for the flight.

The first flight of Russia’s Sukhoi PAK FA fifth-generation aircraft took place on January 29, 2010. Experts believe that the aircraft is unique, combining the functions of strike aircraft and air defence. 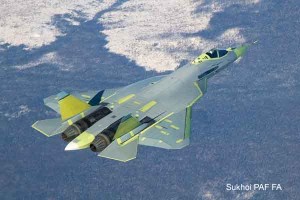 With a service life of about 35 years, the fifth-generation aircraft possesses a completely new complex of avionics which integrates the function of the electronic pilot and the prospective radar station into the phased array antenna and allows the pilot to concentrate on his mission. Apart from the capability to carry both air-to-air and air-to-surface missiles, the new fighter jet can carry a wide range of guided missiles and bombs each weighing up to 1,500 kg on external hard points. The Indian Air Force plans to “acquire 50 single-seat fighters of the Russian version” before the two seat FGFA is developed. The Russian Defence Ministry will purchase the first 10 aircraft after 2012 and then 60 after 2016. The first batch of fighters will be delivered without the ‘fifth generation’ engines.