The second A330 MRTT Future Strategic Tanker Aircraft (FSTA) for the UK Royal Air Force has successfully completed its maiden flight from the Airbus Military facility at Getafe, Madrid following its conversion.

Converted from a basic A330-200 by Airbus Military, the aircraft flew for exactly two hours in the evening of 26th October.

The crew reported that the aircraft, its systems, and two Rolls-Royce Trent 700 engines performed entirely satisfactorily. 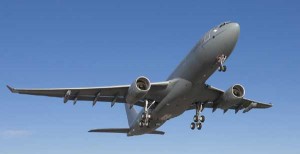 The aircraft joins the first FSTA, which made its maiden flight on 16th September, in a flight-test programme which will lead to first delivery to the RAF towards the end of 2011.

Airbus Military has obtained military certification for the A330 Multi Role Tanker Transport from Spanish military certification authority Instituto Nacional de Tecnología Aerospacial a(INTA) on 5th October. This paves the way to first delivery of the first two aircraft to first operator the Royal Australian Air Force (RAAF) before of the year.

Thanks to its true wide-body fuselage, the A330 MRTT can also be used as a pure transport aircraft able to carry up to 300 passengers, or a payload of up to 45 tonnes/99,000 lb. It can also easily be converted to accommodate up to 130 stretchers for Medical Evacuation (MEDEVAC). To-date, a total of 28 A330 MRTTs have been ordered by four customers (Australia, Saudi Arabia, the United Arab Emirates, and the United Kingdom), with one (Saudi Arabia) having already placed a repeat order.

The Airbus Military A330 Multi Role Tanker Transport (MRTT) is the most capable new generation aircraft in this category flying and available today. The large 111 tonnes/ 245,000 lb basic fuel capacity of the successful A330-200 airliner, from which it is derived, enables the A330 MRTT to excel in Air-to-Air Refuelling missions without the need for any additional fuel tanks. The A330 MRTT is offered with a choice of proven air-to-air refuelling systems including an advanced Airbus Military Aerial Refuelling Boom System (ARBS), and/or a pair of under-wing hose and drogue pods, and/or a Fuselage Refuelling Unit.