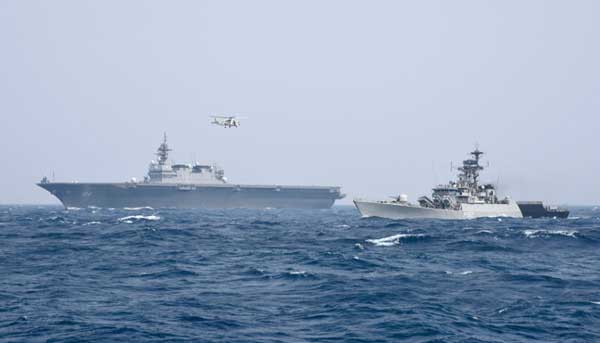 Alfred Thayer Mahan, eventually an Admiral in the US Navy, is often quoted for saying in 1897, “Whoever controls the Indian Ocean will dominate Asia. This ocean will be the key to the seven seas in the 21st Century. The destiny of the world will be decided on its waters”. The term ‘Indo-Pacific’ evolved in recent years recognizes what Mahan foresaw. His book ‘The Influence of Sea Power Upon History’ published in 1890 was a blockbuster. He argued that British control of the seas combined with corresponding decline in naval strength of major European rivals paved the way for Great Britain’s emergence as the world’s dominant military, political, and economic power. British historian John Desmond Patrick Keegan called Mahan the most important American strategists of the 19th Century.

China’s two aircraft carriers (Liaoning and Shandong) are insufficient for force projection globally, China is building two more aircraft carriers that will be larger and able to launch heavier aircraft to attack targets farther away.

Naval power played major role in establishing the vast empire of Great Britain where “the sun never set”. Sea power is essential for overseas conquests, as was used by the ancient Chola Dynasty of South India to increase its influence in Sri Lanka and parts of Southeast Asia. Today, the importance of sea power is more than understood with nations big and small striving to expand their naval strength. China has militarized the South and East China seas for the same reason, is reaching out to other parts of Indo-Pacific and even the Mediterranean. Between the ‘China Dream’ of overtaking the US is latter’s military power, of which sea power is the major constituent.

Presently, China’s two aircraft carriers (Liaoning and Shandong) are insufficient for force projection globally, China is building two more aircraft carriers that will be larger and able to launch heavier aircraft to attack targets farther away. Frigates, destroyers, speed boats, larger amphibious craft (ships and aircraft) are being added in China’s navy which is already largest in terms of numbers. In addition is missile development to sink and destroy enemy aircraft carriers and considerable underwater capability including underwater drones.  Chinese Marine Corps being expanded to 100,000-strong is already positioned at Gwadar and Djibouti.

Mahan died in 1914 but concurrent to Mahan,  French novelist Jules Gabriel Verne penned his ‘Voyages Extraorinaires’ adventure novels that made people call him ‘father of science fiction’.  Many Russian writers like Nikolai Gogol, Alexander Pushkin, Alexey K Tolstoy, Vladimir  Odoyevsky and Thaddeus Bulgarin wrote fiction about space travel.  Konstantin Tsiolkovsky was inspired to write space fiction after reading Jules Verne’s stories. Tsiolkovsky is regarded the ‘father of rocketry’ in Russia being the first to solve propelling a rocket against Earth’s gravitational field, paving the way to space exploration. He believed his theories about space exploration would not become useful for many generations but his works soon after his death were integrated into ‘Space Age’ research.  Today the global race for optimizing and domination of space is raging.

India’s sea and space power is evolving slowly. However, vast land borders, hostile neighbours, belief that  diplomacy and soft power can substitute hard power, and inadequate budgetary allocation for military has constrained development and modernization of sea power. Rapid expansion of Chinese navy and its presence in the Indian Ocean reinforced by the Chinese aggression and the Galwan Clash has served as a wakeup call. India needs to expand and modernize its Navy systemically and holistically to in order to play its required role in the Indian Ocean and the Indo-Pacific.

India’s ‘Mission Shakti’ executed on March 27, 2019 demonstrated indigenous anti-satellite (ASAT) capabilities in successfully shooting down a low-earth satellite. This enabled India join the elite club of countries having similar capabilities; the U.S., Russia and China. Prime Minister Narendra Modi told the nation that the intent of ‘Mission Shakti’ is to defend India’s space assets, not to start an arms race in space. But ASAT capability is only one part of Space Power.

The link between researches in the deep of oceans and how it can help and inspire probing extraterrestrial life in space is engaging scientists around the world. NASA is funding some deep-sea explorations and few  astrobiologists have teamed up with marine biologists and oceanographers to probe the boundaries of biology on this planet, revealing tangible guidance to explore space and opening minds of the scientists to the impossible.

While ASAT capability to shoot down enemy satellites is good, it is defence against space weapons and employment of land-based laser guns and microwave weapons that must be taken note of.

However, correlation of the oceans with space is not limited to the probing extraterrestrial life in space and in turn possible alien threat. Rapid technological advances have has raised the threat to navies far beyond a duel with the adversary’s navy.

Today battlefield transparency does not spare warships, vessels and submarines at sea. Satellites are picking up Chinese submarines tucked away in coves and structures no matter how dispersed along the coast. ‘Swarm Satellites’ have arrived. These nano-satellites are cheap, difficult to detect and would have  redundancy against ASAT weapons because of sheer  numbers. Continued surveillance and monitoring enables targeting naval assets through long-range strikes. This vulnerability goes up when the ability to also strike through space. Anti-ship missiles, cruise missiles and hypersonic glide vehicles increase the threat. The efficacy of Ballistic Missile Defence (BMD) gets diluted with ‘swarm’ attacks.

China has already demonstrated it can electronically target fighter aircraft, drones and satellites. China has a secret complex of chemical lasers, microwave generators and other radio frequency weapons some 145 km south of Urumqi, capital of Xinjiang to neutralize space vehicles of potential adversaries, from where PLA can simultaneously fire up to three laser guns.

A Pentagon report declassified in 2019 reads, “China will likely field a ground-based laser weapon that can counter low-orbit space-based sensors by 2020, and by the mid-to-late 2020s, it may field higher power systems that extend the threat to the structures of non-optical satellites.” It also mentioned, “China plans to use high-energy ground-based lasers in a future war to disrupt Global Positioning System (GPS) satellites that provide pinpoint targeting of US missiles.”

China continues to improve its counter-space weapons capabilities and has enacted military reforms to better integrate cyberspace, space, and EW into joint military operations. Space and counter-space operations are integral components of PLA campaigns with focus on ‘beyond-line-of-sight’ operations to deploy Chinese forces. PLA writings suggest that reconnaissance, communications, navigation, and early warning satellites could be among the targets of attacks designed to “blind and deafen the enemy”.

India has still not defined a national security strategy and a concept like the US Space Force ‘command by negation’ may be considered anathema given the highly centralized national set up in India.

Military satellites like India’s recently launched EOS-01 will be in China’s crosshairs. Space weapons are not new. The US fired a space-based kinetic weapon, ‘Rod of God’, at China’s Tianjin port on August 12, 2015, that killed 114 people and instantly destroyed six city blocks on the edge of the city of Tianjin. This was a weapon that can be dropped from high orbit to strike almost any land-based target. So while ASAT capability to shoot down enemy satellites is good, it is defence against space weapons and employment of land-based laser guns and microwave weapons that must be taken note of.

In the US, a new Chief of Space Operations (CSO) Planning Guidance document states, “While we will extend and defend America’s competitive advantage in peacetime, the ultimate measure of our readiness is the ability to prevail should war initiate in, or extend to space.” It covers all aspects of the US Space Force, talks of “Orbital Warfare” and aims at rapidly building the space force capability to handle “shift from space as a benign domain to a warfighting domain” in line with the National Defence Strategy.

The document acknowledges that military space capabilities legacy systems are not consistent with war that initiates in or extends to space. Because of speed and scale of space warfare, requirement is of default command style of ‘command by negation’ where subordinate echelons are expected to default to action except where a higher echelon has specifically reserved authority.

India’s Defence Space Agency (DSA) headquartered at Bengaluru is a tri-service agency that is in formative stage. It is tasked with operating the space-warfare and satellite intelligence assets of the Armed Forces. India has still not defined a national security strategy and a concept like the US Space Force ‘command by negation’ may be considered anathema given the highly centralized national set up in India. But we need to develop with the new age changes and demands of new types of warfare, including orbital warfare. Mahan said, “Whoever controls the Indian Ocean will dominate Asia. This ocean will be the key to the seven seas in the 21st Century”. But the Indian Ocean cannot be controlled through Sea Power alone. We need a potent combination of Sea and Space Power for this – something China has been focused on.

There is urgent need to  develop effective counter strategies and indigenous solutions against space war of the adversaries, in addition to what we get through strategic partnerships. These are issues that the Chief of Defence Staff should give top priority rather than the Directorate of Military Affairs under him leaking reports to media of proposed cuts in pay and pension of soldiers and veterans, curtailing canteen items, shutting unit messes, curbing ceremonials and the like.

One thought on “Sea and Space Power”