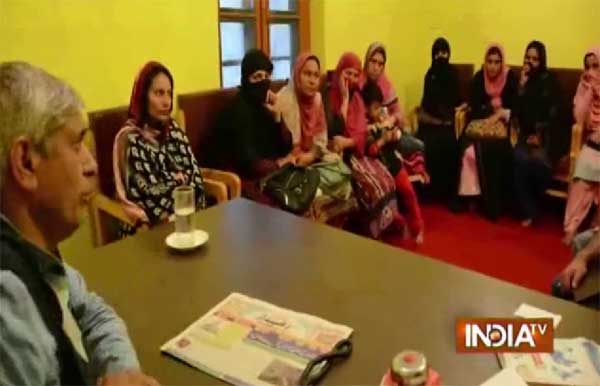 On 23-May-2015, some ten Pakistani women met the General Secretary of ruling Peoples’ Democratic Party (PDP), Nizamuddin Bhat.  These women, as claimed by them entered into matrimonial alliance with Kashmiri terrorists, who had crossed over to Pakistan Occupied Kashmir (POK) for terrorist training. Some of these women maintained that they have children as well by these terrorist husbands. These terrorists had come back to India as per an amnesty scheme, three years ago. It may be recalled that under the same scheme one Hizbul militant Liaquat Ali Shah, coming to India in 2013 was apprehended by the police due to non-coordination between the state government and the intelligence agencies.

…without this video evidence the nexus between the mainstream political parties in the Valley and the separatist leaders, though widely known, would never have been so explicitly exposed.

The women during their meeting with MrBhat spoke of their economic and social plight. It is queer as to why their husbands did not accompany them. Two women were reportedly from Karachi and the rest from POK. Instantaneously what crosses the mind is, as to how some militants travelled to Karachi and found their life partner in the city. This could not have happened without their presence in Karachi for considerable period. It also somewhat vindicates that militants from the Kashmir Valley are being sent to as far as Karachi to train in maritime terrorism, the manifestation of which was 26/11.

The rest of the Pakistani women belonged to the POK. It may be reiterated here that there are very few Kashmiri speaking women in POK. The dialects, culture and food habits of most people residing in POK are much different than the Valley.  The main languages in POK are Urdu, Pahari, Mirpuri, Gojri, Hindko, Punjabi and Pashto. Therefore, linguistic and cultural affinities between the people of POK and the Valley are a perpetuation of false propaganda. There is nothing called Kashmiriyat in the POK. Therefore, the marriage between the Kashmiri terrorists and the women in the POK arouses several kinds of suspicion. Normally, an indoctrinated terrorist does not encumber himself with marriage. The Pakistani militants, who cross over into India for terrorist activities do have paramours but seldom enter into marriage.

Notwithstanding the suspicious circumstances that these women have landed in India, they being directed to Nizamuddin Bhat, appears to be amiss. It is not incidental that MrBhat directed them to meet separatist leader and Hurriyat Chairman Mirwaiz Umar Farooq and seek financial and other kinds of assistance. Mirwaiz, as Bhat suggested, runs an organization Awami Action Committee to provide succor to Muslims in distress. Mr Bhat also said that Mirwaiz was the best alternative as “people here have lost compassion, and Mirwaiz would be better person to help you”. Mr Bhat clearly alludes to the government machinery under the present PDP-BJP government has no compassion (is it because of nationalistic stand of BJP?) and the only benefactor under the circumstances can be the separatist leader.

It has evidenced that the mainstream parties in the Valley have been in collusion with separatists and Pakistan in allowing them to run a parallel dispensation with religious and pro-Pakistan overtones.

All this conversation between Mr Bhat and the Pakistani women is captured on camera. In fact, without this video evidence the nexus between the mainstream political parties in the Valley and the separatist leaders, though widely known, would never have been so explicitly exposed.

The expose narrates the political discourse in J&K over the years. It reveals that the symbiosis of relations between the PDP, the NC, the separatists and Pakistan. It has evidenced that the mainstream parties in the Valley have been in collusion with separatists and Pakistan in allowing them to run a parallel dispensation with religious and pro-Pakistan overtones.

Only last week, there was a rally organized by Mirwaiz in Srinagar, wherein Pakistani flags dotted the landscape and the air reverberated with pro-Pakistani and anti-India slogans.

Later Mr Bhat made a tame clarification that Mirwaiz is not only a separatist leader but also a religious head. This is the dominant discourse on secularism in J&K.

This dominant discourse has been scripted over the years, right from the rule of Sheikh Abdullah. The scripting is mostly done in Pakistan and London. It is for this reason that apart from Pakistan, Kashmiri leaders are so fond of travelling to London. The PDP has only followed the already prevailing narrative. Possibly their concealed religious bigotry, and love and fear for Pakistan will not allow them to alter their mindsets.

The other two regions of the state, i.e. Jammu and Laddakh cannot be allowed to become victims of the perils of the demographic assault by few religiously bigoted and pro-Pakistan leaders in the Valley.

The Pakistan plus separatists plus religious discourse has an economic dimension also. The separatist leader Mirwaiz maintains that his charity organization runs on the donation of people. Any numbers of sources however have confirmed that the separatist and their organization are sustained by siphoning of Indian money poured into Kashmir through the collusion of the mainstream political parties in power. Thus, India is being economically milked by the rulers of Kashmir for furthering the cause of separatists and Pakistan.

The Jammu and Laddakh regions are victims of this narrative and mindset. They need political salvation. This is not possible without changing the politico-religious discourse in the Valley.

Demography construct of the state cannot be allowed to hijack democracy and cause insecurity and destabilization to India. The hounding of Kashmiri pandits out of the Valley was part of this vicious construct. The other two regions of the state, i.e. Jammu and Laddakh cannot be allowed to become victims of the perils of the demographic assault by few religiously bigoted and pro-Pakistan leaders in the Valley.

If the national parties of India entertain the idea of finding a nationalist leader from Valley centric political parties someday, it is not going to happen. The answer therefore lies in salvaging democracy from the engineered demographic discourse in the Valley created through terrorism, fear and subversion.

To salvage democracy and protect nationalists in J&K, the answer lies in demography and the only solution is scrapping Article 370. It needs to be done immediately; the people of J&K and India are suffering.