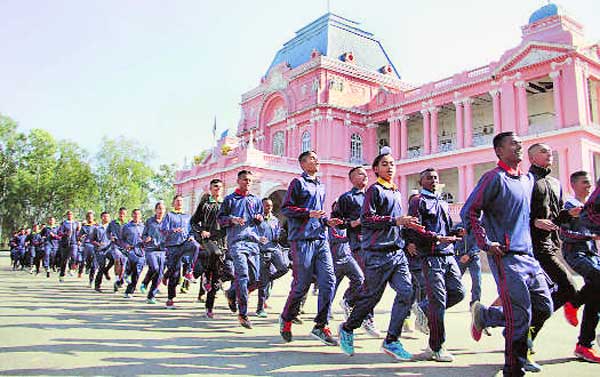 The Maharashtra State Government has recently ordered a “high-level” committee to review the present status of Sainik Schools and collect data of alumni who have joined the Armed Forces. The Committee headed by Additional Chief Secretary (School Education and Sports) has the Education Commissioner, Director (Higher Education), Deputy Director and two other Directors as members. The committee is to submit a comprehensive report within a period of six months. As per media reports, Maharashtra State Government had set up a similar committee on June 27, 2017, tasked with reviewing the performance of Sainik Schools but it is not known whether the committee submitted its report to the government; according to an un-named government official, “The main task before the committee was to examine if the purpose for which the schools (read Sainik Schools) have been set up has been served or not”.

Obviously, the committee set up on June 27, 2017 was also “high-level” and would not have been very different in composition from the one appointed now. Besides, both committes would constitute Maharashtra cadre officers. So finding the report of the committee ordered in 2017 should not be difficult, or nailing those who did not.  Stating “it is not kn0wn whether the committee submitted its report to the government” is nothing short of idiocy. Even if the 2017 committee report was not complete, plenty data would have been collected by the concerned bureucrats, which could be built upon. But as they say in India, which politician questions the bureaucrat – so going around the mulberry bush is the done thing.

In 1995, Maharashtra’s school education department granted permission to private and non-government organizations to start Sainik Schools in each district and one school for girls at the divisional level. Accordingly, over the last two decades, permission was granted for opening 42 schools; 39 aided and three unaided. These schools impart education from Class V to XII, with a total intake capacity of 45 students in each division. In some schools, there are more than one division.

The need for the committee has been reportedly felt because with 42 Sainik Schools spread over the state to groom youth to join the Armed Forces, today no specific data is available on number of students who join the military after passing out from such institutions. One wonders how will this committee deal with the multiple aspects related to the task allotted to it, what will be its recommendation, and what will be the follow up decision by the Maharashtra State Government, and whether it will  result in closure of the Sainik Schools.

How is the committee to ascertain how many students joined Armed Forces, if the students did not remain in touch with respective school after passing out? What was the quality of education provided to motivate children to join Armed Forces; was it adequate or in passing with funds pocketed? Above all, why would children join Armed Forces where the military is no more an attractive career because of the prevailing environment. General VP Malik, former Army Chief publicly stated in July 2018, “There has been a static erosion of soldier’s status … This is reflected in the qualitative and quantitative dilution of military rank and file. By taking away its pride, status and making career unattractive, the militray is no longer a right choice today, which I believe is neither good for the military nor for the nation. General Malik’s staement is a blunt statement of facts and has nothing to do with political affilaitions. Most would know he was Army Chief during NDA I and had excellent rapport with Prime Minister Vajpayee.

Admiral Arun Prakash, former Naval Chief and Chairman Chiefs of Staff Committee, has tweeted, “Perhaps Nehru’s vision is about to come true. He felt that ‘non-violent’ India did not need a military; and police would suffice. The CAPFs now 1.1 million will soon attain parity with army. Their DGs have more clout in MHA than Generals in MoD. What is the writing on the wall?”. The message being spread is that ‘economic engagement’ and ‘soft power’ are more than adequate substitute for hardpower, making defence redundant and Armed Forces somewhat like the necessay evil. Little wonder then that Defence Minister Nirmala Sitharaman informed Parliament in December 2017  that Armed Forces were short of 58,602 personnel; Army 27,864 personnel, Navy 16,235 (24% of authorized strength) and Air Force 15,503 (10% of authorized strength). In addition, Army was short of 7,679 officers against 49,932 (shortage of 15.38%); bringing the overall Army shortages including officers to 35,543.

Children of today are fully aware of what is happening around. They see that while Army has seven Army Commanders, most States have more and in some cases even more than double this number of DG-level officers not only drawing pay equal to Army Commanders but higher allowances and perks. Yet whenever  riots occur in the country, Army is called in as first respondents. The 7th CPC has given better pay and allowances to police forces than military. So would the youth not be stupind to join Armed Forces. The findings of the committee, therefore are foregone conclusion; that few or very few would have joined military ranks, and even lesser will want to join now in an environment where the soldier is systematically being denigraded. So wiil the Sainik Schools be ordered to shut shop?

But before issuing such orders, hopefully the powers that be will have the sense to realize that while joining Armed Forces is supposedly the sole objective in their perception, an equally important corollary to that is imbibing discipline and sense of nationalism in the children, which needs little elaboration going by the daily news in print and electronic media. This is why there are periodic calls for ‘compulsory military service’, even as it is impractical given the numbers involved. This is even more imortant in face of unchecked poulation growth and corresponding rise in unemployment. The IMF forecasts our economy will grow at 7.3% in 2018 and 7.4% in 2019. But there is less than one percent improvement in employment growth within the country’s workforce, with one-third of unemployed residents having higher levels of education.  The reason of course is population growth plus job creation slowing over past several years, due to mismatch between skills and what are considered ‘good jobs’, complicated further with the ‘quota’ system.

The 2018 Global Health Index indicates some 20% of Indian children under the age of five experience malnutrition. India is ranked 103 in the Global Hunger Index (GHI) 2018 among 119 countries; ranked below China ranked 25, Nepal 72, Sri Lanka 67, Bangladesh 86, and a shade better than Pakistan ranked at 106. There is little point listing out initiatives, as Niti Aayog did in 2017, if measures taken do not reach intended recipients. Criticizing GHI parameters and saying this is based on just one year’s data is ridiculous because same applies to all countries and the GHI is issued annually past 14 years. Ironically, India has slipped to 103rd position from ranking of 100 in the 2017 GHI. This shows we are miles away from the lofty pronouncements made to the public in run up to the 2014 general elections including creation of 10 million jobs annually – obliquely acknowledged by Union Minister Nitin Gadkari recently saying, “……When we prepared manifesto, we would make many assurances because we had not the experience of being a party in power”.

We sure may become the fastest growing major economy during 2018-2019 but the fruits of economic rise to reach the masses will take many years going by what is happening, that too if we can manage the social change effectively and route out endemic corruption in the welfare schemes, rhetoric of corruption having been routed out notwithstanding. Suffice to say we are in for many years of internal turmoil, which requires discipline, motivation and sense of dedication in the youth towards the nation. Narcotics, restlessness, depression, crime and hoologanism are already taking their toll, to add to goon armies and criminalization of politics.

One thought on “Sainik Schools – beyond feeding Armed Forces”