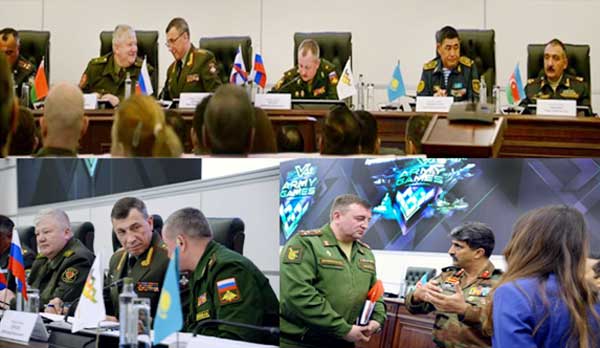 Russia’s Defence Ministry is making vigorous preparations for the International Army Games ‘ARMY-2019’ which are scheduled to be held from August 3 to August 17, 2019. As per available information till now, a total of 10 countries are participating; these being Russia, India, Azerbaijan, Armenia, Belarus, Iran, Kazakhstan, China, Mongolia and Uzbekistan. But there is also another information that that confirmation for participation has been received from 30 countries that are ready to send 206 teams. The interesting part is that some of contests are planned to be hosted by different countries that include the following:

The contest titled ‘Equestrian Marathon’ being held in Maongolia is a first time addition to Russia’s International Army Games. The second planning conference with representatives of foreign countries on the International Army Games 2019 was held at the Patriot Congress and Exhibition Centre under the aegis of the Ministry of Defence of the Russian Federation on April 10-11, 2019. During ‘ARMY 2019’, 32 varied competitions are to be held.

The conference was attended by some 150 representatives of the military departments of Azerbaijan, Armenia, Belarus, Iran, Kazakhstan, China, India, Uzbekistan, Mongolia, on the territory of which a number of competitions will be held, as well as military attaches from 40 countries of Asia, Africa, Europe and America. At the conference, representatives of the organizing countries informed foreign military attaches about venues and order of the practical stages of the competitions held within the International Army Games 2019, the conditions for foreign teams, the order of material, technical, domestic, medical support, the procedure of border crossing with military and special equipment use of special equipment, as well as about the work of media representatives.

In addition, as part of the planning conference, the 2nd meeting of the International Organizing Committee on International Army Games 2019 was held, where organizers of the Games discussed a number of organizational issues concerning provisions on competitions and refereeing, the work of the referee’s board and the technical commission. As mentioned above, presently confirmation of participation has been received from 30 countries that are ready to send 206 teams.

It may be recalled that the last International Army Games, ‘ARMY-2018’, were held from July 28 to August 11, 2018 in seven countries. India had failed to reach the finals even though it came close to the Chinese teams in two competitions it was participating in. In the semi-final for the ‘Tank Biathlon’ competition India fell short of making it to the finals being six minutes behind the Chinese teams. Even in the ‘Elbrus Ring’ competition, the Indian Army’s team called the ‘White Devils’ finished fourth out of seven teams, although it was close on the heels of the Chinese team that came second; the competition was a mountain warfare patrol held in the vicinity of the Elbrus Mountain in Russia. India had shipped two T-90S tanks, manufactured indigenously under license from Russia, for participation in the Tank Biathlon at the Alabino Ranges in Russia. The performance in the initial rounds reportedly went well. However, in the semi-final, the fan belt of the T-90S snapped and broke. The reserve T-90S was then deployed but its engine oil leaked out two kilometers short of the end objective, leading to the disqualification of the Indian team.

Russia and Kazakhstan had performed on Russian-made T-72B3 tanks, China on its Type-96B tank, and Belarus on a modernized T-72. In the past, India had participated in these games using T-72 tanks provided by the Russian hosts. Our fiasco in 2018 may be brushed aside under the pseudonym ‘mechanical failure’ but it would be foolish to not recognize the loss of face at an international event of this nature where 19-nations were participating and the whole world watched.   Disqualification of the Indian team had ramifications not only for future competitions but more significantly, operations. The T-90, nicknamed ‘Bhishma’ as Indian Army’s main battle tank (MBT) is a top class tank comparable to any other in the world. While on the move, it can take on a moving target with little chance of a miss.  The Bhishma is being produced under license in India after the first 657 of them were imported for Rs 8,525 crore from Russia starting 2001.

Inquiry into the failure of these two tanks would have brought out the reasons beyond the broken fan belt and the oil leak, but it is not difficult to put the finger on the cause; typical case of indigenous parts failing under extreme conditions. Why should a new fan belt snap, as it did, and why should the entire oil leak out? When Maruti-Suzuki cars hit the Indian roads, these were excellent vehicles but as the percentage of Indian parts started going up, it was not an unusual sight to see Maruti-Suzuki cars frequently breaking down on the roads, which got rectified when Maruti-Suzuki and consequently Maruti recognized the snag of the poor quality / spurious parts and went in for strict quality control. Would the DRDO be serious to emulate this? Other than rubber parts and metallurgy, we also need to focus much more on faulty ammunitions of all kinds.

Russia has been holding International Army Games since August 2015 involving close to 30 countries battling it out in dozens of competitions over two weeks to prove which nation has the best military. Why India should have participated in 2018 in just two events and not even make it to the final? We definitely need more focus and the Army needs to be more serious because the Ministry of Defence (MoD) cannot be expected to look beyond foreign jaunts of accompanying officials. Hopefully, India will perform better in Russia’s ‘ARMY 2019’, participate in multiple competitions, and at least win the ‘Army Scout Masters’ contest scheduled to be hosted by India.