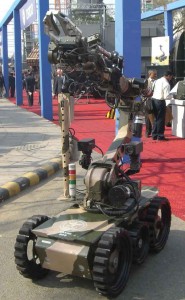 India’s premier defence research umbrella organisation, the Defence Research and Development Organisation (DRDO), is in the process of building robotic soldiers and mules as part of its programme to build unmanned fighting systems of the future. “We are working on building soldier robots that can work like a human soldier. Such a robot needs data base, artificial intelligence to carrying out its activities and the DRDO is planning to build such a robot,” stated Dr VK Saraswat, Scientific Advisor to the Defence Minister and Director General, DRDO. DRDO was also planning to design a robotic mule that could replace a real one used by soldiers in mountainous terrain. The DRDO has already developed Daksh, a remote-controlled robotic vehicle, for detecting and destroying explosive objects. The vehicle has been cleared for induction into service by the Indian Army.