Roads to the Border ...and tourism 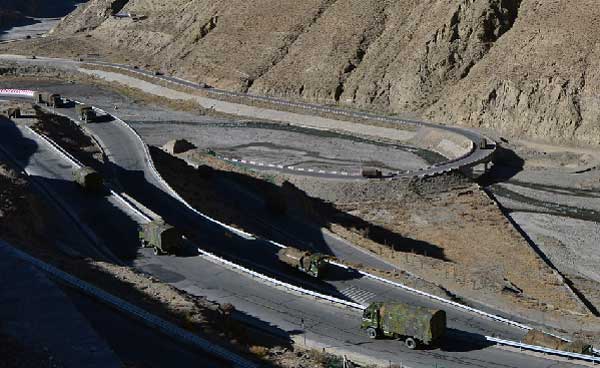 While we regularly come across articles about the Border Road Organization (under the Ministry of Defence) struggling to build roads in Arunachal Pradesh and Ladakh, China is going faster and faster on the other side of the border/LAC.

China Military Online announced that “The highways leading to six frontier defense units in Tibet has been under construction, according to relevant departments of the PLA Chengdu Military Area Command (MAC).”

The Economic Times gave yesterday a partial explanation for the slow development on the Indian side: “the delay in execution of the ambitious Trans Arunachal Highway (TAH) project is mainly because of the compensation issue with the affected people and delay in final forest clearance by the Union ministry of Environment and Forest.”

It is what Arunachal Pradesh PWD Minister, Gojen Gadi stated in the Arunachal Assembly.

Gadi gave the example of the Ziro-Koloriang portion of the TAH: “though the cost of the project in that stretch was Rs 48 crore, the compensation sought was Rs 135 crore.” Apparently the Union Ministry of Road Transport and Highway (MoRTH) objected and the construction of the road is presently stopped.

In Itanagar, according to the same The Economic Times, while the initial compensation claim was Rs 195 crore, it is now Rs 334 crore and the ministry had to reduce the width of the road from 45 meters to 18 meters.

This is how India functions.

The situation is much worst for the projects close to the border, (though they do not require environmental clearance anymore).

Other issues (bureaucracy, corruption, lack of manpower and materials, difficult terrain, etc.) are hampering a faster development of the infrastructure.

China does not seem to be facing such problems.

It is true that the headache is more acute on the Indian side, where the terrain is in many cases extremely difficult.

China Military Online announced that “The highways leading to six frontier defense units in Tibet has been under construction, according to relevant departments of the PLA Chengdu Military Area Command (MAC).”

These frontier units are located opposite the Indian posts, north of the LAC (i.e. the McMahon Line).

The Chinese website continued: “The six frontier defense troop units are the last ones in the PLA Tibet Military Command which haven’t no access to the highways. Many frontier defense companies and sentry posts in Tibet are stationed in forests, valleys or in snowy mountains, it is very difficult and costly to build highways in these places with adverse terrain conditions. Without highways, it is a headache for the frontier defense troops to hold maneuvers, replenish materials and have a vacation leave.”

It is true that the headache is more acute on the Indian side, where the terrain is in many cases extremely difficult.

For example, one of the reasons why the road between Limeking and Taksing (near the LAC) in Upper Subansiri district takes so much time, is the terrain.

Though China’s overall defence budget has ‘only’ been increased by 10% this year, during the 3 last Five-Year Plan (from the 9th to the 11th), the Chinese government “continuously increased investment in the construction of frontier defense installations, as a result, the number of frontier defense units in Tibet without traffic has decreased to six from 19,” says the military website, adding that the construction of the six (last) highways which started successively in 2014 is scheduled to be completed this year.

One difference between India and China, is that while India keeps a tight Inner Line Permit system in place, China invites millions of tourist to visit the area north of the McMahon Line/LAC.

Another article on VTIBET.com explained that in recent years, “road traffic rapidly develops in Nyingchi [or Nyingtri] prefecture, especially in rural areas. Data shows that the total length of road up to 5,351 kilometers in Nyingchi Prefecture, and the rate of road access in towns and villages respectively occupy 96.3 % and 95.7 %.”

Nyingchi, located north of Arunachal, is one of the 7 prefectures of the Tibetan Autonomous Region.

The website added: “At present, Nyingchi basically forms a transportation network that centers on Parkyip County [this county does not exist, the author perhaps means Mainling], and links with all towns and villages of Nyingchi. All these achievements cannot be achieved without the hard work of road constructors and maintenance workers.”

Tashi Yangjen, his colleague from Doyul Township in Lhoka Prefecture added: “The environment in my hometown is quite similar to Nyingchi. We have already built a model ecological village. Our next step is to develop the tourism industry with a strong Lhopa flavor. …Like Nyingchi, we focus not only on economic progress, but also environment protection.”

According to the deputy, the annual per capital income in Doyul reached 10,000 yuan (1,597 US dollars): “The town now has access to hospital, school, plaza, and training center [thanks to tourism],” he said.

On the same site, some photos show an artillery regiment under the Tibet Military Command (MC) stationed in the Tibet Autonomous Region undertaking a ‘long distance maneuver training’.

It demonstrates the dual (military and civilian) use of the infrastructure in the area.

A few lakhs of Indian and foreign tourists could bring a good revenue to the State and help financing the development required to receive them well.

One difference between India and China, is that while India keeps a tight Inner Line Permit system in place, China invites millions of tourist to visit the area north of the McMahon Line/LAC.

The amount invested in roads is therefore recovered extremely fast by the revenue earned from tourism.

A few months ago, China Tibet Online affirmed: “In recent years, Nyingchi [Nyingtri] Prefecture has attracted countless tourists for the unique beautiful scenery of Qinghai-Tibet plateau. Nyingchi Prefecture is expected to receive 2.8 million tourists in 2014, with tourism income of 2.6 billion yuan [US $ 450 millions]. The tourism industry has driven related industries realize the added value of 3.69 billion yuan, accounting for 38% of Nyingchi Prefecture’s GDP.”

Why can’t the construction of the roads in Arunachal be given to the private sector and tourism opened on a large scale (a quick registration for foreigners could be arranged when the visitor crosses the border with Assam, like in Rangpo, in the case of Sikkim).

A few lakhs of Indian and foreign tourists could bring a good revenue to the State and help financing the development required to receive them well. Further, it will be the best proof that Arunachal belongs to India and will always remain so.

A few photos from the Tibetan side of the LAC. The river is the Yarlung Tsangpo, which becomes the Siang and then the Brahmaputra.

The landscapes are not very different on the Indian side.

2 thoughts on “Roads to the Border …and tourism”