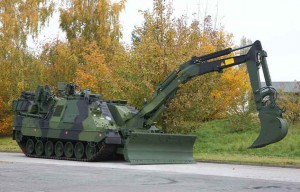 Known in Rheinmetall parlance as the “Kodiak”, the AEV 3 S is a heavy-duty combat engineering system that falls into the military weight category MLC 70. Its mineprotected MBT (main battle tank) Leopard 2 chassis and 1,100 kW diesel engine assure outstanding mobility and a high level of protection. It is equipped with a powerful hinged-arm excavator with different excavator tools, a dozer system featuring cutting and tilt angle settings and a double-winch system consisting of two 9-ton capstan winches. For its self-protection, the vehicle is equipped with a remote control weapon station and a smoke grenade launcher system.

Six cameras provide the two or three-man crew with a panoramic view of the vehicle’s surroundings, enabling them to switch tools and carry out a full range of combat engineering tasks without leaving the safety of the armoured fighting crew compartment. If required, the dozer blade can be replaced with a mine-breaching plough. By adapting the mine breaching kit to the AEV 3 S, the vehicle can be used as a mine breaching system. Among other things, this enables the Kodiak to cut through minefields and to erect or dismantle artificial obstacles. Thanks to its extensive array of equipment, it can also be deployed in a civil defence or disaster recovery capacity as well as in joint civil-military operations.