Rheinmetall MAN Military Vehicles GmbH (RRMV) of Munich has entered a farreaching agreement with Timoney Technology Ltd. of Gibbstown, Ireland, to cooperate in the military logistic and tactical vehicle sector. 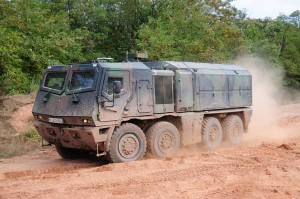 Under a license agreement, Timoney Technology will develop and produce independent suspension systems and power trains for all new RMMV vehicles equipped with all-wheel drive and independent suspension, including systems with two, three or four axles. Based on the Timoney power train technology in Rheinmetall’s Wisent armoured transport vehicle, the result will be a new, highmobility family of vehicles systematically designed to meet the needs of the military.

“This agreement represents a significant step in strategically positioning RMMV as a leading supplier of military wheeled vehicles”, declares Dr. Gerhard Skoff, a member of RMMV top management. “By partnering with Timoney Technology, we’re able to draw on their superior know-how in the field of advanced chassis technology, which bolsters our bid to occupy a leading position in the global all-terrain military wheeled vehicle market”, adds Dr. Skoff. Shane O’Neill, the Chief Executive Officer of TTL said “TTL are enormously excited to be closely involved with RMMV and proud that through TTL Ireland can offer such fundamental automotive engineering to RMMV and Germany, the country which invented the motor car and leads the world in this technology since 1885. TTL, by paying close attention to vehicle mission requirements, have produced the right product in the configuration needed by RMMV.”

The new Wisent, an 8×8 all-wheel drive armoured vehicle, is a first example of fruitful cooperation between the two companies. During intensive qualification trials conducted under the Bundeswehr’s GFF 4 procurement programme, the vehicle handled superbly and, thanks to its high-performance chassis, had no problem coping with even the most challenging off-road conditions.