China has the most opaque political system in the world. The only way to guess what is going on behind the walls of Zhongnanhai (residences-cum-offices of the top Chinese leadership) is to watch the public appearances of the Communist leaders.

One occasion, and an important one, was the 60th anniversary of the founding of the People’s Republic of China (PRC) on October 1. 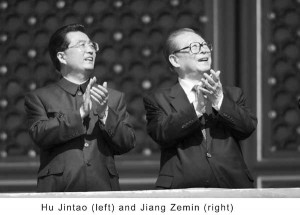 President Hu Jintao and his colleagues had to show to the Chinese people and the world that the People’s Republic (and the Party) was powerful, very powerful.

Commentators said that the parade was China’s largest-ever military display; perhaps even the world’s largest. China watchers also knew that for Hu, it was the culmination of his mandate after the successful organization of Olympic Games in the summer of 2008.

But the surprise sprang from another quarter: the return of former President Jiang Zemin on the political stage. Indeed, it was to the center stage: Jiang stood next to President Hu, with the eight other members of the Standing Committee of the Politburo (the bosses of 1.3 billion Chinese) on his right and on his left.

The Malaysian Insider called it the ‘talk of the town’: “As the China Central Television (CCTV) programme was meticulously scripted by the Chinese Communist Party (CCP), with screen time of leaders carefully apportioned according to hierarchy, China watchers wondered if that meant Jiang still cast a long shadow over his successor, Hu Jintao. … The cameras panned to the 83-year-old former leader whenever there was a mention on the history of the party and the contributions of past leaders. … While observers ruled out a fresh round of vicious elite struggles within the party, they believed that Jiang’s prominence raises questions of factional tussles in the three years leading up to 2012, when Hu, 66, is slated to retire.”

The power struggle has already started.

Willy Lam of the Jamestown Foundation commented: “Jiang, who no longer holds any official position, appeared on CCTV’s live broadcast of the show more than 20 times. …Jiang was just one step behind Hu – and way ahead of the eight other serving members of the Politburo Standing Committee. In a manner that rendered inevitable Jiang’s place as second in the pecking order, the People’s Daily put two equally big pictures of Hu and Jiang on the front page in its October 2 edition.”

Chow Chungyan and Minnie Chan wrote: “Political power grows out of the barrel of a gun, Mao Zedong once famously said. Sixty years after the founding of the Peoples Republic, many of Maos other teachings have been forgotten and forsaken “” but not this one.

This appearance of the ex-Chairman of the all-powerful Central Military Commission (CMC) comes a week after the news spread that Vice-President Xi Jinping had not made it to the CMC. The Associated Press spoke of: “the mystery surrounding the expected appointment of China’s vice president to a powerful military commission deepened”. All this is an indication of important changes in the power balance in China.

Vice-President Xi Jinping had been widely expected to join Hu Jintao on board with the other 10 CMC members. This was supposed to be part of an elaborate procedure which would take Xi to the top of the Middle Kingdom by 2012, with three hats on his head: General-Secretary of the CCP, President of the Republic and Chairman of the CMC.

Christopher Bodeen wrote for AP: “The lack of word on an appointment underscores how opaque the inner workings of the 75 million-member ruling party remain, despite frequent calls for greater openness and intraparty democracy. Information on top leadership positions is tightly held and China’s entirely state-controlled media almost never report on such matters prior to a formal announcement.”

One remembers that in April 1989, one month before the Tiananmen Massacre, Gorbachev, the propagator of glasnost (transparency) had visited China; many believed at that time that the Russian ‘glasnost’ would permeate the Middle Kingdom and make China a modern nation. It was not to be.

Twenty years later, it seems that ‘transparency’ remains unknown to the leadership of the CCP. The return of Jiang Zemin and the non-promotion of Xi Jinping tend to prove once again that we know very little about the process of governance in China. But is there a system of governance?

Jinping is the son of Xi Zhongxun, one of the senior-most leaders of the First Generation of the CCP. The latter was associated with the CCP work in Tibet and wrote a report for the Party about the famous 70,000 character petition from the Panchen Lama to Premier Zhou Enlai, detailing the wrongs of China’s Tibet policy. He apparently agreed with some parts of the assessment of the No 2 Lama in the Tibetan hierarchy.

China is probably the only country in the world where the Constitution states that the Army is “under the absolute leadership of the Chinese Communist Party”.

Like many other leaders, Xi Zhongxun soon fell out of favour; he was officially accused of disloyalty to Chairman Mao. Was he not tough enough with the Tibetan people? Who knows.

Old Xi was rehabilitated in the 1980’s; he later participated to the setting up of one of the first Special Economic Zones in Southern China.

Is his father’s past catching up with Young Xi?

To come back to Jiang Zemin, though he relinquished his post of chairman of the CMC in September 2004 (after 14 years at the head of the Commission), he appears to have kept in contact with the Generals with whom he was associated.

Do not all these generals owe their present position to him? Further, Jiang, the leader of the Shanghai Faction (or clique) has still a large office in the CMC building in Beijing and occasionally visits his former colleagues. He has been apparently active after the riots in Tibet in March/April 2008 and the earthquake in Sichuan a few months later.

It is even rumoured that President Hu had to precipitately leave the G8/G20 meeting in Italy in July after Jiang began to mingle in the post-riots management in Xinjiang and he had disagreed with Hu’s handlings of the unrest.

Last year, the PLA’s Chief of the General Staff, Chen Bingde wrote about the PLA’s role in the aftermath of the earthquake in Sichuan which killed nearly one lakh people. General Chen mentioned five times that the PLA asked for the guidance and instructions of Chairman Hu [Jintao] and a CMC leader: “We are determined to use all means — and to spare no efforts — to implement the instructions of Chairman Hu and the CMC leader”. Was Jiang Zemin the mysterious CMC leader quoted at par with the Chairman? Probably.

Willy Lam made a comment which may explain the non-promotion of Xi to the CMC. He noted that: “At the 16th Party Congress of 2002, Jiang set the precedent of retiring from the posts of party chief and state president — in favor of Hu — but hung on to the post of CMC chairmanship. Given that his long-standing political foe has refused to fade into the sunset, Hu now has even more of an urgency to tighten his grip on military power beyond the 18th Party Congress. After all, the head of the Chinese Youth League (CYL) Clique has to ensure that when he leaves the Politburo and its PSC in 2012, enough of his protégés and cronies can be appointed to the supreme council.”

If Hu wants to play a Jiang in 2016 or 2020, it would be better for him to hang on to the CMC for a few more years and appoint few friends who may later show some gratitude.

The presence of Jiang on the rostrum also demonstrates that the Elders culture which played a determinant role during the Tiananmen events is still very much alive twenty years later. One remembers that all the important decisions (including sending the tanks to smash the students) were taken by a group of eight Elders with Deng Xiaoping as the paramount leader.

Finally, Jiang’s appearance illustrates that the relation between the Party and the PLA is as close as it was 60 years ago. In an article in the South China Morning Post, Chow Chungyan and Minnie Chan wrote: “Political power grows out of the barrel of a gun, Mao Zedong once famously said. Sixty years after the founding of the People’s Republic, many of Mao’s other teachings have been forgotten and forsaken — but not this one. Every top communist leader since Mao has known what supreme power rests upon.”

Today the PLA remains loyal to the Party and at the same time, the CCP gives its due share in the affairs of the State to the PLA. China is probably the only country in the world where the Constitution states that the Army is “under the absolute leadership of the Chinese Communist Party”. The PLA’s instructions and guidance do not come from the State Council or the Ministry of National Defence, but directly from the CMC. This shows the importance of Jiang’s return (if he had ever left) and partly explains the regaining of aggressiveness of the China leadership vis-à-vis India.