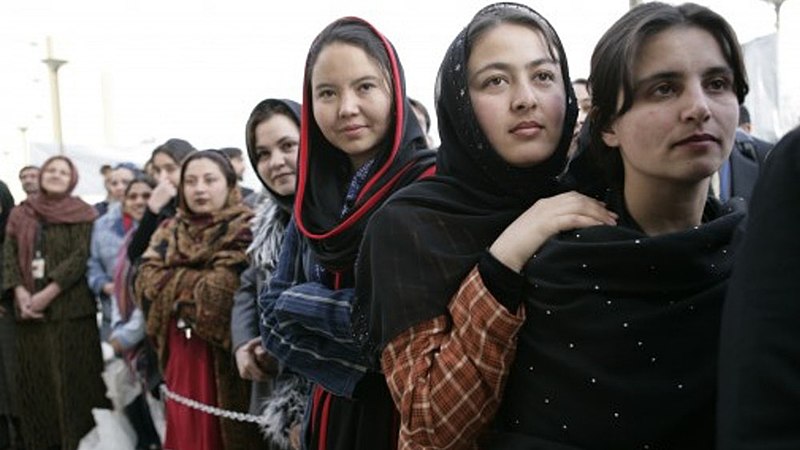 Afghan women’s trailblazing role for their country at a critical phase of transition added a new dimension. A slogan that enveloped the capital city of Feroz Koh – “We are standing by our brothers and are supporting the system, the people, and the country’s sovereignty”, to pledge their support for the Republic and the Afghan National Defense and Security Forces.

‘Afghan women are with a voice today, which make them strong, responsible and equal to men. Afghanistan is a male dominant society but Afghan women have taken a special place with grace, courage and intelligence. There would never be no progressive, peace and development in Afghanistan without the full and equal contribution of Afghan women’, said FaridMamundzay, Afghanistan’s Ambassador to India.

Discrediting the Taliban’s violent narratives, many women have taken up arms in support of the Afghan forces with vehemence, power and ardency to prevent the Taliban from gaining any toehold as they carry their deadly attacks in the country.

And all these fragilities show how important it is for Afghan women to use this crisis as a chance to pivot to have a stronger and inclusive Afghanistan.

“If you gain something, you will fight for it. You will not give it up easily. No one can take it from you,” So I’m so hopeful that even with this civil war, with this fight, with this level of brutality and bloodshed that is going on in Afghanistan, women of Afghanistan won’t give up.” As stated by Naheed Farid, a Member of the Afghan Parliament.

Afghan women have endured pain and suffering but their spirit remained high. Few examples are really praiseworthy to mention. Highlighting the role of Afghan women in advancing and underpinning durable solutions amid conflict reflects grace, strength, intelligence, fearlessness and the nerve to raise their voice.

At this perpetual crisis, the undaunted spirit of Afghan women dares to see the light at the end of the tunnel. From the outset of instability, Afghan women have already mobilized and responded to the unprecedented challenge imposed by the Taliban for decades.

In conjunction with the US Military withdrawal and mounting pressure of the Taliban, the Afghan women strongly believe that they cannot afford the hard-fought gains to be lost.

Underpinning Afghan women’s marvellousachievements regardless of their challenges amplify the prime proponent of inclusivity and offered a valuable contribution to Afghanistan.

Ambassador Farid Mamundzay further added, ‘Afghan women are tough, ambitious and progressive. They have always been a force for good throughout the history. The past two decades in particular has been transformative for their social and political status. Afghan women can do anything that Afghan men can do for instance, there are women ministers, members of parliament, police officers, doctors and athletes’.

At present Afghanistan have 3.3 million girls in education, and women more actively participate in the political, economic and social life of the country. Despite the ongoing conflict, Afghan women have become lawyers, doctors, judges, teachers, engineers, athletes, activists, politicians, journalists, business owners, police officers, and members of the military.

“Time and again, Afghan women have proven that their skills, knowledge and fierce determination have pushed their country towards the peaceful and prosperous future that Afghans yearn for. Today, Afghanistan stands before an opportunity unlike any other in the country’s history. Afghanistan can build back a better, stronger country for every woman, girl, man and boy. To do so, women must be at the front and centre of decision-making, to achieve a peace that lasts, for a bright future for all Afghans,” as stated by AletaMiller, UN Women Representative in Afghanistan.

Women are the first Victim of Violence and War in Afghanistan

Plagued by decades of war with inciting violence and Taliban’s edict on women’s freedom has created a furore in recent days. Women took to streets in Central and Northern Afghanistan chanting anti-slogans for the beleaguered Taliban factions who have been suppressing women’s rights since an era.

To avert the worst of the Taliban’s diktat on US withdrawal; Afghan women are not only raising pertinent concerns about their rights but have been consistently showing exemplary courage in defending themselves to fight back.

According to Fawzia Koofi, an Afghan politician and women’s rights activist stated the Taliban’s stance and said, ‘they care about the role of women within an Islamic system and within the framework of Afghan traditions’.

Throughout the history of the Taliban domination with violent suppression, at present Afghan women have started raising their pitch and demanding justice, freedom and dignity.

It is estimated that close to 47,600 civilians have been killed and more than double that number injured in Afghanistan during the 20 years of war. The conflict has killed a total of 72 journalists. Around 66000-69000 Afghan soldiers were martyred in Afghanistan.

Women and children comprised over 44 per cent of all civilian casualties. Conflict affects women more destructively. The road-map to peace in Afghanistan hopes to provide a substantial status to women.

To quote, the horrific attack in May at Sayed Ul-Shuhada high school, in Kabul claimed the lives of dozens of school children, mostly girls, and severely injured many more provides ample evidence to determine the commitments made by the Taliban during the Doha peace deal have been violated.

In a collective endeavour to voice the concern, to ensure greater equity, opportunity and dignity for Afghan women in May this year, the Indian women from political, cultural and social spheres have sent a letter of protest to the Afghan Consulate in Mumbai condemning the killing of Afghan women and children.

One needs to compliment the credible contribution of Afghan women in supporting the future of Afghanistan.  Roya Rahmani, the first female Afghan Ambassador to the United States recognizes the impressive degree of ambition built at an unprecedented ambition.

The miraculous achievements of Tamanna Jahan and Nazima Khairzad who have scaled 5,000 meters high Shah Foladi, the highest peak in the Koh-e-Baba Mountains of Bamiyan province in April this year speaks at length their efforts and leadership can lift the entire world.

The united and collective action of Afghan women reflected through the KAM Air with the all-female crew that flew to Herat in the west of Afghanistan for the first time in February this year.

The ambitious vision of Niloofar Rahmani shot to fame in 2013 for being the first woman to pilot a fixed-wing jet in Afghanistan’s air force.

Sowing the seeds of hope and confidence, FribaRezayee the first-ever female Olympic athlete participated in a judo competition at the 2004 Olympic Games in Athens. Masomah Alizada is one of the 29 refugee athletes who will compete at the Tokyo Olympics this year.

Roya Sadat, a prominent Afghan filmmaker, is among 10 women from across the world to be awarded the annual International Women of Courage Award.

By prioritizing a ground-up approach, it deepens the capacities of the Afghan women to make meaningful progress on the commitment to leave no one behind.

Appeal to Taliban to let Afghan women Live in Peace

With its unifying lens, the Taliban must change its outlook towards Afghan women and build a conceptual framework to assess the effectiveness of humanitarian, and peacebuilding strategies. Women empowerment will build resilience and maximize their potential at all levels.

This is a unique opportunity for the Taliban to integrate women’s rights in the peace deal partnering with the Government of Afghanistan, civil society and international bodies at this crucial time.

Not only Afghanistan the entire world has changed profoundly over the years adapting to each country’s unique context to build inclusive societies.

Women empowerment is one of the progressive moves in magnifying the role of women in state-building, more importantly, in the peace process and development of civil society. The role of Afghan women is envisioned through the prism of development, improvement and significantly achieving sustainable goals for better livelihood creation. The women in Afghanistan seemingly are driving a wedge between suppression led by the Taliban regime, yet their undaunted spirit is much appreciable at unprecedented levels.

The democratic peace process can only grow with women’s active participation in all the spheres including social, political and economic. In spite troubled history of Afghan women’s suppression and the downfall of the Taliban, they have put tremendous effort to improve their status in society on all fronts. Afghan women have been putting efforts to secure their status bringing to light the possibilities women can create in enhancing the country’s growth for nation-building and the peace process. Afghanistan is set on the journey for a sustainable peace deal and the participation and securing of equal rights to women in the peace process for nation-building is an important element to engineer transformation.