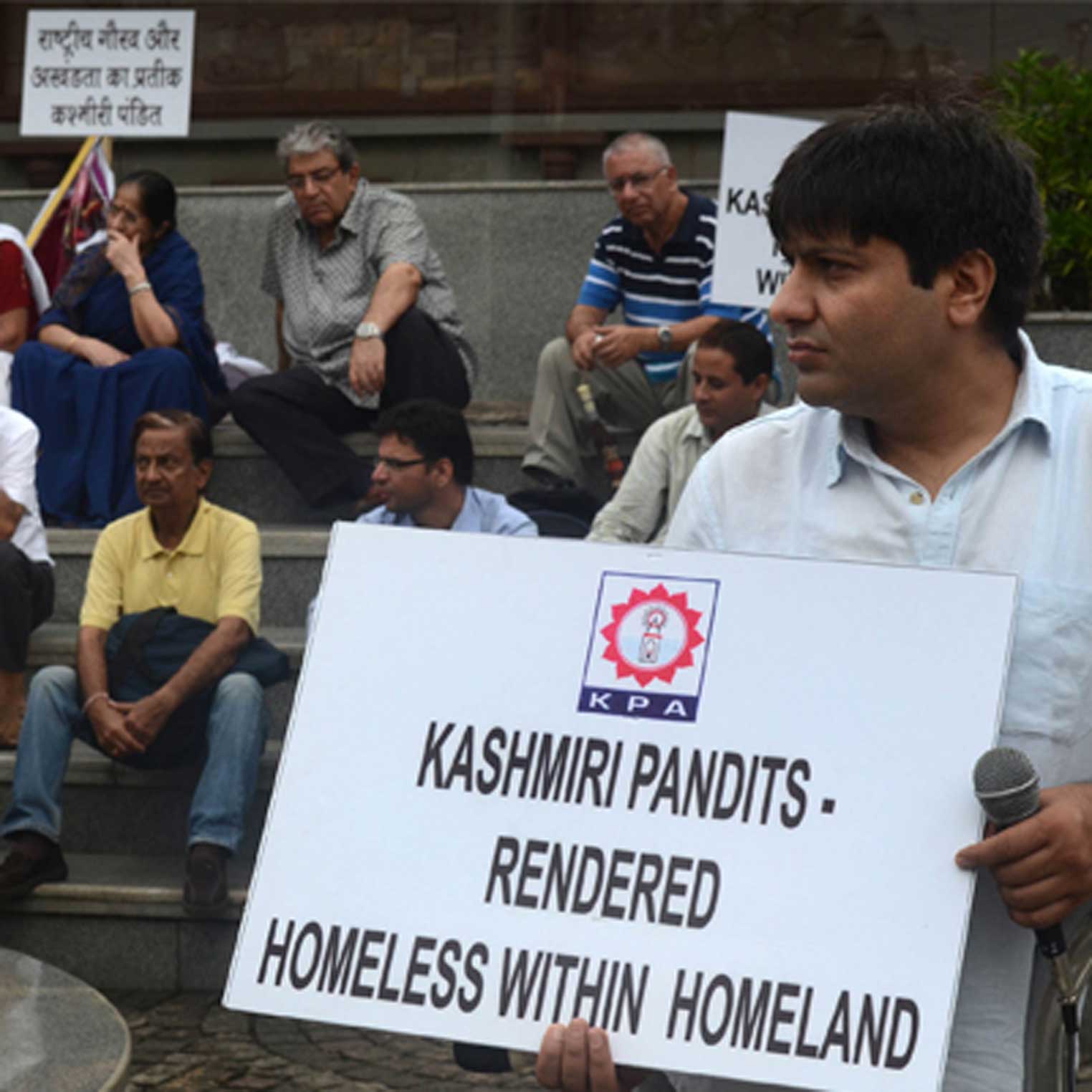 The need to settle Kashmiri Pandits is unexceptionable. They were uprooted quarter of a century ago and little has been done to resettle them. Most of them still live as internally displaced people in refugee camps. There has been much talk but little forward movement in this area. Currently there are two set of proposal to rehabilitate them back in the Kashmir Valley, from where they were ejected.

To add to the sense of insecurity of Pandits on prospect of being sent back to the valley, Pakistan has come with the allegation that this move is to alter the demography of the valley.

One proposal is to set up composite townships and the other is to settle them at their own earlier dwellings. The Home Minister of India wants to establish, what he calls, ‘composite townships’. This is being opposed both by the Chief Minister of the state, as well as by the separatist elements and their so called leaders in the valley. The Chief Minister of J&K wants them to reoccupy their old dwellings and properties and so do the separatists leaders in the valley.

To add to the sense of insecurity of Pandits on prospect of being sent back to the valley, Pakistan has come with the allegation that this move is to alter the demography of the valley. It has talked about the UN Resolution on J&K little realizing that it is Pakistan which rendered this resolution irrelevant and redundant by its failure to abide by first, by not pulling out troops from the Pakistan Occupied portions of J&K and then changing the demography of POK.

Both proposals have some serious implications. In the first place one needs understand the compelling circumstances under which Pandits had to leave the Valley. These conditions were reminiscent of those that prevailed in Pakistan part of India at the time of partition. There was a complete breakdown of law and order. Women were no more safe and so also others. There was open harassment, intimidation, assaults and murders. What made it all the more distressful was the fact this was so when there was Governor’s rule in the state, where Central Government could have come to the aid of the state without any hassles. It was indeed the most shameful event, where a section of the population was targeted on ethnic basis and made refugees in their own country. No police and other heads rolled!

When the first batch of refugees were brought out of the Valley and camped on the outskirts of Nagrota cantonment, there was palpable tension in Jammu town. So, as Corps Commander in the Jammu region, I immediately met the then Governor and impressed upon him the need to restore law and order in the Valley and brought out that these refugee camps should be established in the Valley and not in Jammu. Also emphasised that it should be made clear to the troublemakers, that Hindu population will not leave their rightful homes in the Valley. While the Governor, Mr Jagmohan listened to me intently, he did nothing to restore order and stop this exodus or set up these camps in the Valley itself.

It was also apparent that there was no change in the stance of the separatists in the Valley. The Administration’s ability, perhaps inclination, to handle law and order problems with a firm hand was totally lacking.

The recent demonstration, organized to ‘honour’ Alam Masarat, where he and others raised anti-India and pro-Pakistan slogans, hoisted many Pakistan flags and the seditious violent mood of the demonstrators was demonstrably evident. Also evident was the state government’s lack of ‘will’ to round up those hoisting Pakistani flags and take Alam Masarat back into custody. It was also apparent that there was no change in the stance of the separatists in the Valley. The Administration’s ability, perhaps inclination, to handle law and order problems with a firm hand was totally lacking.

J&K consists of three distinct regions, namely, Kashmir Valley, Jammu region and Ladakh (north of Zojila Pass including Kargil – Zanskar area). It is only some elements in the Valley (five districts) who display longings to join Pakistan and some others talk of being an independent state. So the elements in the Valley cannot be given a free run to hold the state of J&K and the Union of India to ransom.

Given the state where administration is soft pedalling on the law and order issue, displays inability to create a climate of safety and assurance of peaceful living, makes doubly suspect, the prospects of a safe and secure life for the Pandits, were they to return to the Valley.

If they are housed in new ‘integrated colonies’, then what of the safety of their children going out to schools and colleges and those who have to earn a living or take up jobs with the government and are posted to far off places! These will be gated colonies needing full protection against terrorist attacks and so on. It will amount ghettoization and the smooth working of this proposal appears highly suspect.

The second proposal projected by the state chief minister and backed by the separatists that Pandits take up their own properties and live there, brings in the same problem of insecurity and being at the mercy of terrorists and bad elements within the Valley. They will be held, more or less hostage, by the bad elements and terrorists. Moreover most of these properties are damaged and others occupied by the locals. Getting these vacated is another issue, which will pose an altogether different set of problems and reactions.

The ultimate solution lies in doing away with Article 370. This is one pill, which will remedy this lingering malady. After all Article 370 was meant to be a temporary arrangement.

This mode of rehabilitation will breed tremendous insecurity amongst the Pandit community, more so when the authorities (political class, bureaucracy and police) mandated to maintain law and order and ensure safety and security of this section of society, lacks the will and the resolve, is feeble and directionless. What happened to Pandits quarter of a century earlier will at some point, get repeated on a larger and more virulent scale.

India will have to find a way out of this problem and integrate the people of J&K into the national mainstream. As the rest of India is poised to experience prosperity and wide spread economic development, this failure to integrate the state of J&K with the rest of the country will play against the interests of the people of the state. This cannot happen if the current policy of isolation and hands off approach, concerning J&K is to continue. It is in the interest of the state itself to seek entry into the national mainstream and profit from the future prosperity of the country.

There is large scale unemployment in the state, more so the Valley, where youth is falling prey to the influence of separatists. Given the state of uncertainty, lawlessness and frequent troubles, few are willing to set-up industry in the state. As Indian economy is on the upswing, there are great opportunities for the youth of the country, which those in the J&K too must profit from. This cannot happen if the present state of uncertainty and isolation continues.

The ultimate solution lies in doing away with Article 370. This is one pill, which will remedy this lingering malady. After all Article 370 was meant to be a temporary arrangement. Elements who alone have profited from this state of uncertainty will try to whip up trouble in the Valley and administration has to gear itself to firmly handle the same. May be even the LoC may come alive, which the army is well geared to handle. Similarly in others states where there are restrictions and laws which debar Indians from outside the state to buy property, the same must be simultaneously removed. As an Indian national one should be at liberty to buy property anywhere in India and settle down according to his or her wishes and requirement.