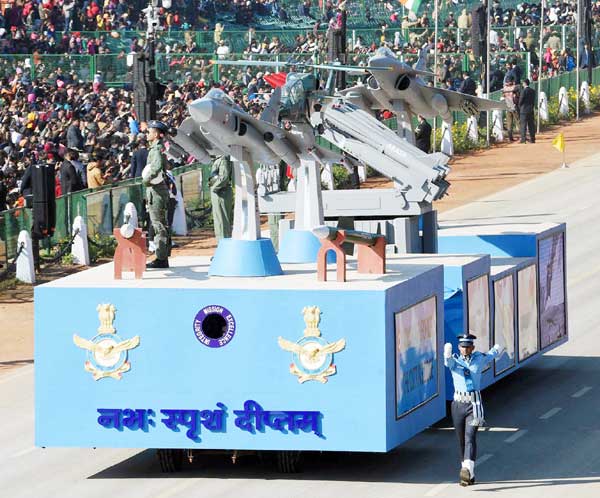 January 26 invokes a patriotic fervour in all of us. It is quite a show when the uniformed soldiers march in unison, freshly painted military equipment trundle down the Rajpath and the aircrafts make a fly past above. Braving a truant weather, thousands of citizens line up from Raisina to Red Fort to witness this spectacle. Military parades could be boring; if the same fare is offered every time. In the past, we have witnessed the same tanks, guns, missiles and aircraft being showcased, because the military was saddled with aging hardware. Things have been changing in the last few years. Indian Armed forces are now dusting off their obsolescence and acquiring some strategic capabilities.

Since 1972, the parade used to start after the Prime Minister laid a wreath at the Amar Jawan Jyoti at India Gate. The venue has now shifted to freshly built National War Memorial, which was dedicated to the nation in February 2019.

The parade of the 71st Republic Day has so many firsts to its credit. Since 1972, the parade used to start after the Prime Minister laid a wreath at the Amar Jawan Jyoti at India Gate. The venue has now shifted to freshly built National War Memorial, which was dedicated to the nation in February 2019. Built near the India Gate complex, the memorial reminds us about the 25, 942 Indian soldiers who laid down their lives at the altar of nation since the Independence.

Normally, the Prime Ministers have been laying wreath at the Amar Jawan Jyoti in the presence of three Services’ Chiefs – the Army, Navy and Air Force. This year, the newly appointed Chief of Defence Staff, General Bipin Rawat shall also be present along with the Chiefs at the National War Memorial. The appointment of Chief of Defence Staff has materialised after two decades of bureaucratic and military wrangling. Let us see how the General and his Department of Military Affairs brings much needed coordination among the Services and the ministries.

India has become a space power to reckon with. In March 2019, we joined ranks of the United States, Russia and China by successfully conducting an Anti-Satellite (ASAT) missile test, nick named Mission Shakti. This event has put India on the path of not only developing a robust anti-satellite capability but also an effective anti-missile defence – an operational pre-requisite in the current geo-strategic scenario. This ability, will finally be mated with the newly formed Defence Space Agency. The Defence Research and Development Organisation shall be showcasing the anti-satellite missile system on the parade.

For the Indian Air Force (IAF), year 2019 has been eventful. Three modern aerial platforms were included to its aging inventory. In March 2019, the IAF received fourCH-47 Chinook helicopters from the United States. With just three obsolete MI-26 helicopters on the inventory, the Chinooks would provide much needed heavy lift capability to the IAF once it receives all the 15 choppers.

The Chinooks and Apaches will take to the Indian skies for the first time during the parade.

In 2019, the IAF also received four Apache AH-64 attack helicopters ordered from the United States. Any conflict scenario in the context of India and Pakistan and even India and China is incomplete without the mention of mechanised warfare. The fleet of Mi-35 gunships, which the IAF currently holds was unsuitable for the task.T he Apaches, once fully deployed would fill-in the critical gap of having third dimension offensive capability in the mechanised warfare.

The Chinooks and Apaches will take to the Indian skies for the first time during the parade.

India had procured 155 mm Bofors FH-77 guns for the army in 1986. Soon the gun procurement got embroiled in a scam. Based on the technical blueprints of the Bofors, the Ordnance Factory has developed an indigenous 155 mm 45 Cal artillery gun called Dhanush. Dhanush is much better in performance than its predecessor and is set to replace the gun inventory of the army which is staring at obsolescence. By appearing on this Republic Day, Dhanush heralds a paradigm shift in the fire power of the Indian artillery.

Captain Tania Shergill, who carries forward her family’s legacy of the profession of arms and being the first parade adjutant.

In the past, we have only seen the officers and other ranks of the Army Air Defence (AAD) accompanying their guns and missiles on the parade. This time, we would see a contingent from AAD marching down the Rajpath like the other troops. During the rehearsals marching of the AAD contingent was found to be crisp, precise and energetic.

When it comes to gender equality, the Armed Forces stand above the rest. For years, we have been seeing women working in the offices, factories and government jobs but the process of gender equality was always considered incomplete, till the women made forays in the armed forces. A lady in uniform is a personification of gender equality, woman emancipation, self- esteem. Here we have Captain Tania Shergill, who carries forward her family’s legacy of the profession of arms and being the first parade adjutant. Her example would propel countless young women to join the armed forces.