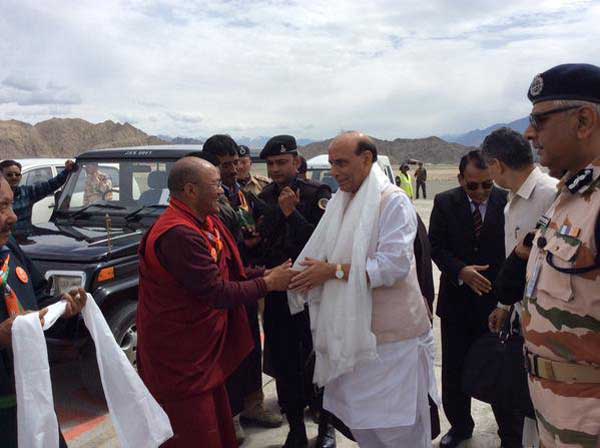 Home Minister Rajnath Singh led a contingent of parliamentarians drawn from different political parties on a two-day visit to Ladakh. This was in fulfillment of the promise he had made at the end of the parliamentary delegation’s visit to Srinagar and Jammu in July last.

…right from day one of present government assuming the reins of governance at the Centre, the subject of Ladakh’s strategic significance and security importance in the wake of hostile stance by China became more evident.

Ladakh, like Jammu region, has long standing complaint of discrimination by the Srinagar regimes over the years.  The Centre never took serious cognizance of their complaints. That has been a recognized facet of Congress government’s policy for J&K.

Modi government is in harness for two years. It, too, did not evince extraordinary interest in Ladakh internal politics though BJP candidate won its parliamentary seat. It was less because of BJP’s activism in Ladakh and more because of long standing disgruntlement of the Ladakhis against biased Congress-NC rule.

During the government of late Mufti Muhammad Saeed and also Mrs. Mehbooba, a united delegation of Ladakh civil society, headed by the Chairman of LHDC called on the State Governor, Prime Minister and the Home Minister in New Delhi. The delegation armed with one brief presented a solid memorandum to top national and State leadership. The crux of their demand was that the LHDC is starved of funds, ignored for infrastructural development and treated discriminatingly.

NDA government may not have taken unusual steps impacting internal politics of the region; it may not have made calculated decisions to alleviate more pressing problems of the people. Perhaps it did not want to give the impression that unlike the Congress rule, it was taking extraordinary interest in Ladakh administration.

Actually, right from day one of present government assuming the reins of governance at the Centre, the subject of Ladakh’s strategic significance and security importance in the wake of hostile stance by China became more evident. After Modi government assessed the broad features of Chin’s border policy vis-a-vis our country in Ladakh in particular, the Indian government came to the conclusion that in given circumstances security arrangement on Ladakh border with China had to be re-visited in pragmatic terms.

China’s greed for land in Ladakh has been there ever since India attained independence. With the exit of colonial power from the sub-continent, China re-appeared with its real face on the political chessboard of the region.

Prime Minister Modi visited Ladakh a couple of times. Other VIPs also came on the heels of Prime Minister’s visit. In particular, Surface Transport Minister Nitin Gadkari made announcement of mega road projects and streamlining of connectivity between Ladakh and the rest of the country. Closer and more concentrated interaction among defence, home and finance ministries ensued in New Delhi with focus on upgrading border security arrangement and floating various defence projects. Union government found it unavoidable to invite cooperation and collaboration of local populace in bringing about meaningful change in Ladakh.

Gradually, Ladakh region surfaced as very vital and crucial to the defence of our northern border. Authorities and policy planners in New Delhi had known before as well but paint scant attention to any pragmatic stance. Why security matters in Ladakh received only secondary importance remains unexplained.

China’s greed for land in Ladakh has been there ever since India attained independence. With the exit of colonial power from the sub-continent, China re-appeared with its real face on the political chessboard of the region. The history of her illegal and clandestine incursions into our territory in Ladakh beggars no description. At one time China issued maps showing its area of influence right up to Zoji La forcing India to lodge protest.

The Kargil war of 1998-9 was actually inspired by the covetousness of China. If Pakistan had been able to cut off India’s link to Ladakh at Kargil, and captured Siachin strategic post, she would have ceded it to China just as she has already illegally ceded five thousand square kilometer area in Aksaichin of the original State of Jammu and Kashmir facilitating China connectivity to Tibet. Hidden ambitions of China are now opening up layer after layer. The Karakorum Highway, connecting Urumchi in Xinjiang with Karachi and now extended to Gwadar port on Makran Coast of Baluchistan now serves potential strategic link though China gives it the soft name of China-Pakistan Economic Corridor (CPEC). A hefty amount of 46 billion dollars is earmarked for its developmental projects in the region.

China has not likely to be deterred by loud protests of New Delhi because, after all, it is her long-range plan grand West Asian strategy.

Under the broad and dubious term of ‘development’ in Chinese lexicon, are included building of secret ballistic missile bases, streamlining of the Highway to make it usable for heavy military war machine transport like tanks, armour, gun carriages, crucial war material and gas pipeline to carry Daulatabad gas in Turkmen Republic via Afghanistan to Xinjiang along the KKH and finally the laying of railway line that will connect China to Gwadar.

China has paid no attention to India’s protests for undertaking “developmental” works in a region that legally belongs to her. She has not likely to be deterred by loud protests of New Delhi because, after all, it is her long-range plan grand West Asian strategy.

The point we want to bring under focus is that all this is by no means an ordinary plan and vision of policy planners in Beijing. India has to rise to occasion and be ready for any exigency. The looming Sino-Pak perfidy has catalyzed India’s drastically revised policy of bringing Ladakh on the strategic map of the country. The raising of three more Mountain Divisions of Indian Army, with two of these probably to be deployed along border with China in Ladakh, expanding road connectivity all along the long border, tunneling of Zoji La and Gagangir to make Srinagar – Leh connectivity uninterrupted, building of airstrips close to the border, streamlining of telecommunication system and establishment of permanent military bases in the eastern Ladakh all explain that New Delhi has totally changed its perception of Sino-Indian border in Ladakh.

As this expose was being scripted, the news came that India is very likely to deploy the Rafael fighter planes, she recently bought from France, along the border with China in Ladakh. This fighter is reported to have an edge over the American F-16 supplied by the US to Pakistan.

In an exhaustive article published recently in China’s reputed paper International Times, the commentator has tried to create an impression that India is gearing up her war machine in Ladakh. Whatever interpretation Chinese commentators may like to give, the reality is that India has to completely overhaul her Ladakh border security plan.

Home Minister conceded that entire Ladakh spoke with one voice and only one thing. This has lent great strength to the demand of Union Territory, and the Union government cannot ignore it any more.

No doubt chances of bringing rail line from Srinagar to Leh are becoming brighter with the tunneling of Zoji La and Gagangir taken in hand, yet India plans to bring another rail link to Leh via Manali. It has considerable significance from security point of view.

In this broad spectrum of strategic lay out, the role and status of local population in the nitty-gritty of internal politics must also be brought under purview. In particular, exceptional patriotism of Ladakhi people, men and women, their deep nationalistic instinct, close cooperation with the army and voluntary service to the army are immensely valuable in making the new security arrangement a success in the region.  Ladakh people have been consistently demanding Union Territory status to the region on strong plea that it needs rapid and phenomenal development in all walks of life. Those conversant with the history of relationship between Ladakh and Srinagar based governments have no difficulty in conceding that the former have genuine grievances pending since many decades.

This recent visit of the Home Minister is highly significant from one particular aspect. In his interaction with the press, the Home Minister said that a score of Ladakhi organizations representing different social segments, political tendencies, professions and walks of life have all in once voice demanded only one thing and that is Union Territory status. There was no other agenda and no other demand. Home Minister conceded that entire Ladakh spoke with one voice and only one thing. This has lent great strength to the demand of Union Territory, and the Union government cannot ignore it any more.

From the standpoint of national security and the requirements of the region, Union Status for Ladakh would guarantee economic prosperity and social cohesion.

However, valley-centric political establishment has been opposing and will continue to oppose this demand of Ladakhis. Apprehensive of Ladakh agitation for Union Territory status gaining public support on larger scale, the then Srinagar-based National Conference government subtly ordered detachment of Muslim (Shia) dominated Kargil district from one-unit Ladakh region, and later on ordered delimiting Zanskar (with fair sprinkling of Sunni Muslims) from Ladakh and attaching it to Kargil district. This was brazen faced communal divide and has persisted till date. Interestingly, PDP High Command has now expelled its local chief in Kargil from the party for joining the delegation of Ladakhis who called on the Home Minister and demanded UT for Ladakh. In their memorandum submitted to the Home Minister in Kargil, the Kargil Hill Development Council categorically demanded that the Union government reject the demand of the Ladakhis for UT.

However, this opposition emanates from deep-seated political rivalry among local Kargil Shia groups. The fact is that majority of Kargil people fully understand the benefits of Kargil becoming part of the UT. But they are under the pressure from valley political leadership that desist them from becoming part of UT.

From the standpoint of national security and the requirements of the region, Union Status for Ladakh would guarantee economic prosperity and social cohesion. The southern regions of Lahul and Spiti providing alternate entry and exit to Ladakh district could be included into it and thus make a strategically comprehensive, geographically homogeneous and politically more stable unit along the northern boundary of India. It would be a solid ground to thwart nefarious design of China and Pakistan.