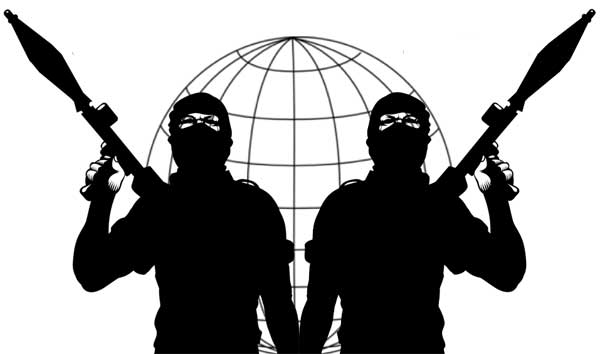 That Terrorism is the scourge of the world is a harsh truism of the times is beyond dispute since the last few decades. That global challenges necessitate global solutions requires no elaboration is also a universally accepted imperative—yet only in lip service and hardly ever adopted in practice. Why else would then the world, with inexplicable insensitivity and inaction, accept the most tragic happenings and the grave humanitarian crisis in intensely fratricidal violence driven Afghanistan?  Failing to heed to the lessons of history,  US President Joe Biden has committed a monumental  strategic  blunder in  the undue hasty  and unplanned exit  of American troops from Afghanistan is now more than apparent beckoning dismay and condemnation  from even US allies and sympathizers across the world especially by the hapless Afghans. Biden’s folly anyway can never compensate the unimaginable human tragedy which has unfolded in ill-fated Afghanistan. That the wily, overly ambitious China with its willing foot-soldiers, the Pakistan government led by an internationally renowned cricketer but an utterly strategically naïve Imran Khan appear unduly jubilant not realizing the expiry date of their so-called euphoria. Both him and his Chinese mentors have endorsed the Taliban takeover. However, Islamic terrorism never deviates from its established goals and altruism and tolerance are not a part of it.

As the unimaginable tragedy unfolds itself with much pain and poignancy, the world barring some lip-service utterances, has hardly come out with a road map to manage this catastrophe. Has anyone ever witnessed wailing mothers handing over their infants to American soldiers heading home or to those who are lucky to have crossed over to neighbouring nations? Scenes at Kabul airport are reminiscent of hell having broken lose on earth. Though the evil Taliban has unleashed its traditional medieval terror on women and commenced executing those Afghans who allegedly had opposed them in the last few years, yet the rare courage displayed by some Afghan citizens has been exemplary. Many women and youngsters have openly defied the Taliban, marching on the streets and voicing their demands for women to lead normal lives and restoration of their human rights. They are strongly clamouring for being allowed to attend educational institutions and work outside their homes.

With the inexplicable capitulation of the Afghan Security Forces, without firing a shot and like a pack of cards, despite their numerical strength and far better equipment than the Taliban, the latter are virtually in control of the entire nation barring the Panjshir region and reportedly the neighbouring Baglan provine. Panjshir had during the earlier Taliban rule ( 1996-2001) been under the sway of the legendary Abdul Shah Masood who led the anti-Taliban and anti-Pakistan  front,  the Northern Alliance, composed  mostly of the Tajiks, Hazaras, Uzbeks and a few Pashtuns. Now his son, Abdul Masood has raised the flag of Afghan nationalism alongwith former Afghan Vice-President, Amrullah Saleh against the Taliban who appear to have encircled the Panjshir defences and are waiting to mount an a offensive. That the Taliban hordes have been reinforced by Pathan suit wearing Pakistani soldiers cannot be denied by anyone. It is a matter of time that the Taliban will be mounting a determined and strong offensive to capture the Panjshir-Baglan region.

With Taliban in full control of Afghanistan, the re-emergence of all pervading global terrorism is a natural corollary. The Taliban will be the grateful mentors now of the Daesh, Al Qaeda, the Haqqani network and importantly  major Pakistani terror organizations like the LeT,  Jaish, Lashkar-e-Jhangvi, Jamaat-ul-Arhar and even the Tehreek-e-Taliban Pakistan among other tanzeems . Pakistan based terror outfits are anyway represented strongly in the current strife inside Afghanistan taking their orders from the top Taliban hierarchy whilst supporting them with foot soldiers and their diverse expertise honed by Pakistan’s sinister Inter Services Intelligence (ISI). That the ISI would have prepared contingency plans to relocate some of these hardcore terrorists for intensifying terror operations in India’s Jammu and Kashmir region does not brook any elaboration. It is not only India but all western nations may witness an upsurge in Sunni sponsored terrorist activities with its roots in Afghanistan and Pakistan. That the American government, despite their military leaders and intelligence agencies spelling out unequivocally Pakistan’s role in fostering terror continues to compound one mistake after the other, insisting to bail out Pakistan financially remains beyond anyone’s comprehension.

With the Taliban takeover of Afghanistan, the jury is out declaring the winners and losers of this traumatic event. By any standards, China, Pakistan, Afghan Taliban, Turkey, the various terror tanzeems of the region and to some extent Saudi Arabia could be classified as the winners. However, the losers are distinctly Afghanistan itself, US, India, Shia Iran and the entire West. However, most nations are still being reticent to recognize the Taliban officially, though some among them would surely have established links with Taliban behind the scenes.  Perhaps awaiting the entire evacuation of Indians and those of Indian origin wishing to come back to India is over, our government has not come out openly to condemn the Taliban!

China, since a few years has been eyeing the vast mineral resources of Afghanistan comprising the mining of gold, copper, rare earths and accordingly has invested heavily in Afghanistan to excavate its mineral wealth. Accurately gauging the weakness of the Ashraf Ghani government, China assisted by Pakistan, had opened up secret channels of communication with the Taliban leadership since the last year or so. Only last month it hosted a Taliban delegation where Chinese Foreign Minister Wang Yi had effusively praised the Taliban. And now with the Taliban in power in Afghanistan, China will work determinedly to fructify its strategic goals in Afghanistan. Apart from exploiting its mineral wealth the Chinese are more than wary of any Islamic terrorists from Afghanistan coming to the assistance of their fellow Uighur Muslims in the adjoining restive province of China’s Xinjiang region. China has, since the last few years, launched a massive, brutal de-Islamization programme in Xinjiang and thus is sensitive to any assistance to the East Turkmenistan independence struggle from fellow Islamists from Afghanistan. Thus it will likely humour the Taliban leadership with massive economic   aid to prevent such a development.  Pakistan, naturally, will assist China in all such endeavours.  Importantly, China will  now link up its ambitious Belt and Road Initiative programme to its gains in Afghanistan by extending the China Pakistan Economic Corridor to the plains of Afghanistan and onwards also to the Chabahar port apart from the Gwadar port —- a major strategic gain. India will have its hands full to now convince the Iranians to honour their commitments to India as regards Gwadar. India cannot brush aside the compulsions of geography and proximity—- a mistake we have made in recent years by stopping oil imports from Iran.

India, having failed to convince its strategic ally, the US, to delay its departure from Afghanistan has hardly any worthwhile options left now in its Afghan policy. In the land of ‘the Great Games’ India has to protect its strategic interests notwithstanding the current setback to it from the Taliban-China-Pakistan axis. India must frame its policy serving its own interests which is neither American influenced or conceived from a Pakistani prism point of view. Though inordinately late, India must still work to evolve a regional consensus for Afghanistan with like-minded nations like Russia, Iran, Central Asian Republics, European Union and the UN. The US is gradually getting irrelevant in the region and their policies of ‘blow hot-blow cold’ towards terrorist outfits will hardly help India. Amazingly, just today the US has sent its Director CIA to confabulate with the Taliban leadership in Kabul! Meanwhile India must utilize its tenure in the UNSC to rein in Pakistan, work towards financial sanctions against it for Pakistan is the real cause of all of Afghanistan’s tribulations. Not surprisingly the women, youth and other sections of the Afghan people have condemned Pakistan for its continuing machinations in Afghanistan. It is a matter of time that the proud Pashtuns will turn back on the Pakistanis and settle matters. The Tahfuz Afghan movement and the simmering Durand Line differences between the Pashtuns and Pakistan cannot be wished away by the latter.

The coming months are crucial for the stability and economic survivability of Afghanistan and also for Taliban’s survival as a government and to be internationally accepted. India will have to monitor the fresh geopolitical realities of the region with caution.  Pakistan, in all likelihood, will step up its iniquitous efforts to up the ante in J&K for which India must have contingency plans ready to deliver a telling reply to Pakistan in case it indulges in any mischief. Challenging times in the immediate future await India which must continually strive to sustain the enormous respect it has earned from the Afghan people since decades.

One thought on “Re-Emergence of Global Terror”