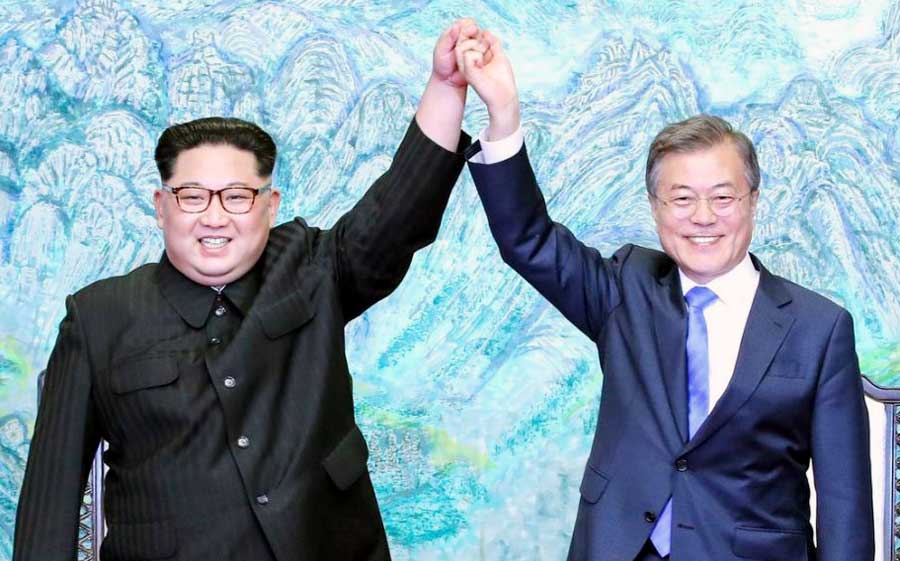 The US had launched 59 missiles at Syria in April 2017, and the USS Carl Vinson had headed off to the Korean peninsula.  Kim Jong-Un had replied with missile test after missile test and a nuclear test in September 2017, drawing warnings from the USA of massive military response[1].   Kim Jong-Un and Trump engaged in name-calling:  Kim called Trump “deranged”, and Trump retorted with “Little Rocket Man” in a UN speech.  The US imposed the deepest sanctions ever after the Sept 2017 nuclear test.  The relationship between the two countries went from bad to worse at a rapid pace, compounded by the European Union banning oil exports and investments in North Korea besides other, serious trade sanctions.

Thus, six months ago, there was substantial reason to be concerned about a surprise US air attack on Kim Jong Un’s palace, in a somewhat repeat of the US attack on Muammar Gaddafi in 1982.  Or else a fire and fury storm on North Korea of the type that hailed on Saddam Hussein.  But, by January 2018, the world started to see a Kim Jong-Un change his tone and tune.

Changes in Tone and Tune

Definitely feeling the pinch and pain of the sanctions by the world, though North Korea denies that altogether, the first sign of change came when North and South Korea decided to march under the same flag at the 2018 Winter Olympics.  By itself, this may not be a significant event, considering that the two have marched in this fashion for 17 times previously at international sports events.  However, Kim Jong-Un’s sister and US Vice-President Mike Pence were made to sit in the same box at the Winter Olympics.  Some called this coincidental, but the writer suspects that the South Koreans very carefully planted this circumstance.

Nevertheless, two South Korean officials paid a visit, thereafter, to North Korea, where Kim Jong-Un extended an olive branch to South Korea and the United States, offering to denuclearize in exchange for US withdrawal from South Korea, while recognizing that US-South Korean military exercises must continue.   There was more, of course: North Korea wanted security guarantees plus a few untold bargains.  The South Koreans then brought a proposal for a North Korean–US summit to the White House, and Donald Trump promptly accepted, to the surprise of many in the White House.  The main reason for accepting the talks was Kim Jong-Un’s willingness to discuss denuclearization.  Without this on the table, President Trump wanted no meeting.

As of now, Kim Jong-Un has promised to stop nuclear and missile tests, which is a temporary relief that allows breathing time.  Though Japan wants complete and irreversible removal of all North Korean nuclear assets, even Japan must be realistic, unless they wish to go to war.  And further, both South and North Korea favor a much-needed peace treaty; a hot line has been established between President Moon Jae-In and Kim Jun-Un; and the two met with bonhomie in the DMZ, with each crossing into the others’ country.  They had a lavish Korean banquet, complete with symbolism and pomp from the days when Korea was one country.

Already, Moon Jae-In and Kim Jong-Un agreed to the following at their meeting last month:

There was even talk of South Korean investment to build roads.  And all this is going to be capped with a meeting between Donald Trump and Kim Jong-Un.

These are rapid changes – faster than one can possibly keep up with, let alone imagine only six months ago.  But, they are headed in the right direction.  Seldom can one move from the starting point to the end point without going through multiple intermediate stages.  There is always a process one has to go through.  Thus, Japan, who has its eyes only on denuclearization, will have to be patient.

Rapid Events in the USA

At the US end, this period was accompanied by various distractions — firings of Rex Tillerson, Lt Gen McMaster, and the FBI Acting Director, the latter done only one day before his retirement.  The Mueller and Stormy Daniels cases took much airtime.  The news media could not figure which news to focus on before the next big event emerged, almost spontaneously.   There was a lot of noise in the media about every major event, drowning out previous each event by the next.  Trade tariffs on China, and tariffs against all steel and aluminum exporters to the USA were another big moment in the world, affecting world economic markets and the security perspective of many nations. While China backtracked and gave in to Donald Trump on the matter of tariffs (negotiations yet to conclude), Kim Jong-Un paid a surprise visit to Beijing.  It naturally appears that Kim Jong-Un will try everything and meet anybody to have his sanctions reversed.  The lesson from the strikes on Syria by Western powers has probably not been lost on Kim Jong-Un, who probably shudders at the thought, while everyone knows that his missiles really can’t reach the USA yet, whatever he may claim.

And, in a surprise and secret mission, Mike Pompeo visited North Korea, met Kim Jong-Un, and plans for a historical summit between Trump and Kim Jong-Un are forging ahead.

However, the US is willing to seize the opportunity if a deep thaw in Korean relations can result.  There are various benefits of a change in the stance and position of South and North Korea, USA and China.  But, we must now analyze what offers have been made, what the two sides may agree to, what brought them this far, the role of the leftist Moon Jae-In and China, what Kim Jong-Un means by denuclearization, and how the chances of a war are not over yet.

Also to be covered are a peace treaty on the peninsula after 65 years, meetings between relatives on the North and South sides, the problem of the THAAD missiles, and South Korean relations with USA.

The Issues on the Table

North Korea wants a lifting of the sanctions and offers a denuclearization on the peninsula; Kim does not now insist on a withdrawal of US troops, realizing that that is neither here nor there, since the USA has agreed many times in the past not to attack North Korea.   He probably feels that the USA will withdraw troops anyway, so why press an issue that has no resistance?  Other issues that Trump has in mind are a peace treaty and complete nuclear disarmament by Kim Jong-Un.  American, Chinese, and South Korean investment in North Korea is another possibility that has not been mentioned yet, there being other smaller details to take care of first to set the path straight.

The US wants to actually withdraw most of its troops from South Korea, mainly because South Korea is not paying for the THAAD missiles.  China wants the THAAD missiles removed owing to their proximity to China, but the USA wishes to keep those missiles there for the very same reason.  Even South Korea asked for the THAAD missiles to be removed, because President Moon has leftist, globalist leanings, and is pressured by China.  At the end of the day, we should question whether it is the hidden hand of China behind all these moves to create a possible free-trade zone in the Korean peninsula, so that they can sell their goods easily there.  A thaw in relations will mean that China comes out as the top dog on the peninsula, mainly owing to its geographical proximity.

The South Koreans have long had a love-hate relationship with USA.  Leftist parties want to see the USA leave the peninsula altogether, while rightist parties fear that a war with North Korea may come more likely as a result, because North Korea could be emboldened to take unilateral military action, much as it did in 1950.  Hence, right leaning parties want to see US presence continue.  However, partial compromises and small agreements may be able to nudge all parties to the next level.  It is difficult to see complete resolution at this very first meeting between Kim Jong-Un and Donald Trump.

Globalism and the Leftist Moon

President Moon came to power by a media coup that brought charges – possibly fabricated – against President Park.  In fact, President Parks’ removal and arrest were dubbed as a media coup, where 70% of the media in South Korea is leftist.  The judges are not much different, supposedly.  Almost immediately during his campaign to become President, Moon Jae-In let it be known he wanted a thaw in relations with North Korea.  That said, there is substantive evidence that Moon belongs to the left that is close to China, and perhaps even being beholden to China.  There is some evidence that China funds and interferes in internal South Korean politics.

If this is true, Moon is committed to advance China’s agenda, which is mostly a globalist agenda – that of free trade – while President Trump supports a nationalist agenda.  The main aim of China here is to capture the Korean trade and commerce market with its vastly cheaper goods and products.  To accomplish this, China needs to bring a thaw to the relations between North and South Korea, and have the sanctions on North Korea eased.

Nevertheless, there is some rationale in believing that China is behind the entire thaw because (i) President Moon is leftist, and (ii) China stands to gain from a trade perspective, and (iii) China could rid itself of US troops out of Korea, as a byproduct of the deal, even as Trump wants them out, regardless.  That President Trump demanded from Xi Jinping to rein in North Korea also fell in line with Chinese interests.   Whether China or USA win the evolving bargain, or whether they gain equally, can only be known later.  But, all these events bring a much-needed change to entrenched positions in Korea as a whole and the tied-down status quo.

In one sense, the USA could become intransigent, dig in its heels, and insist that North Korea must denuclearize for any ease on sanctions.  This is quite likely.