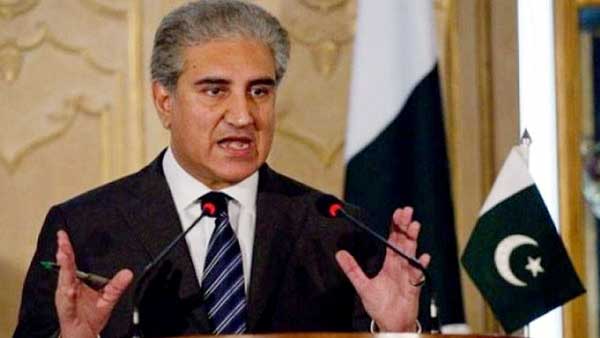 The foreign minister of Pakistan, SM Qureshi, in a press briefing emphatically maintained that India will launch an offensive into Pakistan between April 16 and 20, and will stage a Pulwama type suicide attack to serve as excuse for the offensive.

…the probability of a Pulwama type attack sponsored by Pakistan’s military-intelligence establishment is extremely, extremely high. An environment for such attack has been assiduously prepared by Pakistan, internally and internationally.

This author is of the opinion that the probability of a Pulwama type attack sponsored by Pakistan’s military-intelligence establishment is extremely, extremely high. An environment for such attack has been assiduously prepared by Pakistan, internally and internationally.

Following major developments post-Balakot indicate the contours of proxy war that India may be subjected to from Pakistan.

•  Third, the strict regulation of movement on the Jammu-Srinagar National Highway. The highway is not closed, repeat not closed. Not only declared jihadis but undeclared jihadis as well, in garb of politicians, are against imposition of any security measures on the highway, since they desperately want to facilitate another Pulwama type attack that Qureshi warned.

•  Fourth, posturing of anti-India elements within the Kashmiri leadership with Farooq Abdullah questioning Pakistan’s loss of F-16 aircraft, and the violent reaction to the closing of the highway. Also pro-Pak jihadi threats by Abdullah and Mehbooba incase Article (35A) was rescinded.

•  Fifth, the desperation in the certain segment of the Indian political class after failure of the Pulwama attack to bring down the image of current dispensation because of the neutralizing action at Balakot.

•  Sixth, Pakistan’s imperative to restore  proxy war machinery which is in totally disarray after Balakot.

No foreign minister of any country would spell out specific dates of an impending attack from any quarters. The foreign minister of Pakistan has gone even a step further by prophesying a Pulwama type suicide attack within India. It is strange that a foreign minister of a country, which imputes such deep infiltration into intelligence agencies and decision-making apparatus, both external and internal, could not predict the possible reaction by India as it manifested in Balakot air-strike! Those who know Pakistan well, are aware of the limited or no role of Pakistan’s foreign policy establishment in determining strategic policy towards India. It is the exclusive preserve of the military-intelligence establishment. What Mr Qureshi has shared with tone of inevitability, undoubtedly has been fed by the military. It is also queer that the foreign minister of Pakistan should get so charged-up when, as they maintain, in his own true admission, nothing has happened, neither air strike at Balakot nor the loss of F-16.

If we had not done ‘Balakot’, the entire country would have become an arena for Pulwama type attacks in order to influence national elections.

Pakistan closed its airspace after the Balakot strike. Only now of the twelve routes has opened. Till now, only India was suffering from Pakistan’s proxy war, therefore the closure of air space and the losses therein suffered by our aviation sector is something expected. If we had not done ‘Balakot’, the entire country would have become an arena for Pulwama type attacks in order to influence national elections. The biggest losers because of the closure of air space, are the foreign aviation companies. The entire east-west movement has been disrupted. Cancellations, re-routing and re-scheduling of flights have imposed heavy costs on operations. Muslims of the subcontinent, employed in the Gulf, have enormously suffered. Afghanis coming to India for medical treatment have been devastated. The ripple effect of Pak sponsored jihad has weighed very heavily on the so-called Islamic brotherhood or Ummah. Pakistan, whose economy is in tatters, cannot actually afford the ‘closure’. As per one estimate in the first three days in the wake of Balakot, Pakistan suffered loss of $ 20 million, i.e. $ 4 million on account of closure of air space and $ 16 million due to loss of F-16.

Karachi airport is the largest in Pakistan and covers 50 percent of the air traffic. It handles seven million passengers every year and thousands of over flights.  Hence, the closure of air space over Karachi  entailsa loss of $ 1.2 million revenue every day. Little does  JihadiPakistan realize that jihadi outfits like JeM are the cause of economic destruction of the country. If there were to be another 26/11, will Pakistan block its waters? Intelligence inputs suggest that JeM and LeT were frantically training their cadres for 26/11 type ‘samudari jihadi’. What will happen to international trade through sea during such  eventuality?

The ripple effect caused by Pulwama has therefore been massive and far-reaching. This ripple effect in the ultimate analysis will surely impact on CPEC. This ripple is bound to travel to Uighur Muslims in China. The foreboding was there in the UN Security Council, when the US moved the resolution against the JeM and highlihted China’s duplicity, byciting its crackdown on the Uighur Muslims.

…it may indulge in nuclear rattling to create international panic and thus prevent India from retaliation. It tried to do the same during Kargil.

The question that should trouble every Indian mind is as to why Pakistan has chosen to be hit by severe economic loss due to closure of its air space for such a long time? The most plausible reasons are — to sensationalize the international community, in preparation for another Pulwama type attack. Pakistan wants to ensure that in the aftermath of the contemplated attack, there is no retaliation like ‘Balakot’ by India due to international pressure by this stage managed environment it has created. In this bid, it may indulge in nuclear rattling to create international panic and thus prevent India from retaliation. It tried to do the same during Kargil.

The future of Pakistan’s proxy war and strategic agenda is precariously predicated on the electoral misfortune of the current Indian dispensation. The suicide attack in Pulwama was carried out to influence the current general elections just as 26/11 was carried out in November 2008 to influence 2009 general elections. Just because Pulwama was neutralized by Balakot, Pakistan will not be chastised, and never relent. It is desperate to portray the present dispensation as effete in dealing with proxy war. This has to be done to salvage its jihadi credentials, to bolster the jihadi outfits in Pakistan, and the jihadi proxies and certain political class in India.

If Pakistan does not do another Pulwama (sans Indian retaliation) during these elections, the nature and cycle of proxy war by Pakistan will take a permanent hit. Balakot has dealt a massive blow to the military-jihadi partnership in Pakistan. It may be appreciated that jihadi tanzims like the JeM are not permanently wedded to the military-intelligence establishment. The JeM cadres are even fighting in Afghanistan. The JeM therefore like all others is a global jihadi organization.

These elections are ‘do or die’ situation for the proxy war apparatus in Pakistan and proxies in India.

These elections are ‘do or die’ situation for the proxy war apparatus in Pakistan and proxies in India. The worst fear for Pakistan and its proxies in India is the return of the present dispensation. With Balakot, India has not only gone proactive but also rendered Pakistan’s jihadi apparatus in disarray. The manner in which the narrative against Article 370 and 35A is gaining momentum all over India, both Pakistan as well as the mainstream Kashmiri leaders are getting alarmed and nervous. It is for this reason that Omar Abdullah and Mehbooba Mufti are issuing subversive threats. Their only hope to cling on Article-370/35A is a change in dispensation. With Karan Singh stating that Article 370 was not any part of the Annexation Agreement the wind has gone out of the sails of these protagonists.

Pakistan’s influence on Indian politics travelled through Kashmir into Lutyens Delhi and down to Kerala. The harmony in anti-national political discourse from the soil of Kashmir and Kerala is too stark to be ignored. The tryst of Jihadis, Maoists, Kashmiri separatists witnessed in the tukde-tukde episode in the JNU was a microcosm, Waynad in Kerala offers the full blown picture, without any political pretensions.

The extent of Pakistan’s influence on Indian politics was evidenced by the recruitment of Ishrat Jahan by LeT, specifically to assassinate the present Prime Minister, at the behest of a political party. When that failed there was a direct attempt on his life in Patna’s Gandhi Maidan in 2013.

A  Pak sponsored Pulwama type attack or Gandhi Maidan type attack is a distinct possibility. The dates as bracketed by Qureshi may vary, the methods may vary, but object remains steadfast.

One thought on “Qureshi bares Pak plan of another Pulwama”