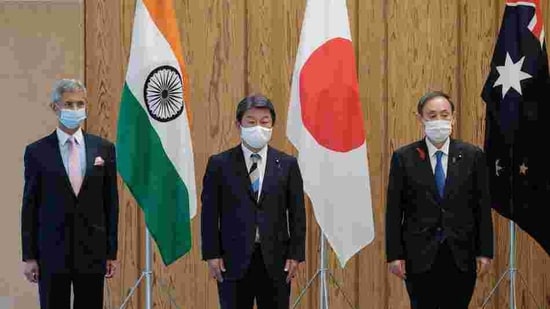 India, Australia, Japan, and the US held their third Quad ministerial meeting on February 18 to discuss ways to enhance cooperation for maintaining a free, open and inclusive Indo-Pacific in the face of China’s growing aggression in the region. This was the third meeting of Quad Foreign Ministers, after September 2019 and October 2020, since the mechanism at the level of officials was revived in 2017. External Affairs Minister S Jaishankar participated in the virtual meeting along with his counterparts from the US, Japan and Australia. This was the first such meeting of Quad member countries after the Joe Biden administration took charge in Washington.

The virtual meet was held in the backdrop of growing unease amid China’s Communist Party (CCP) over future direction of the Quad, China’s muscle flexing in East and South China seas and the Taiwan Straits,  increased periodicity of America’s freedom of navigation patrols (FONOPs) in Western Pacific, and Chinese submarines and underwater drones prowling the waters of the Indo-Pacific.

Earlier in the month, CCP’s mouthpiece Global Times had warned US President Joe Biden that renewing Quad would be a serious strategic blunder and may spark a severe strategic confrontation with Beijing. The rag also said that India has the power to end the alliance and asked India to not completely tie itself to the American “anti-China chariot.” However, US State Department spokesman Ned Price told reporters on February 17, that the US Secretary of State Antony Blinken would speak with the foreign ministers of the Quad member countries, also saying, “These discussions with the Quad foreign ministers is critical to advancing our shared goals of a free and open Indo-Pacific and rising to the defining challenges of our times.”

In the 90-minute virtual meeting the Quad foreign ministers had discussion centered on issue like the centrality of ASEAN, rule of law, free and open Indo-Pacific, maritime security, COVID-19 pandemic, climate change, counter-terrorism, situation in Myanmar, humanitarian assistance and disaster relief and supply chain resilience. US Secretary of State Anthony Blinken took part in the meeting for first time although he had spoken to the three other foreign ministers on the phone separately earlier. There was no joint statement at the end of the meeting but all four countries issued press releases after the event – as has been the form in the previous such meetings.

The US State Department statement said the Quad  ministers discussed “countering disinformation, counterterrorism, maritime security, the urgent need to restore the democratically elected government in Burma, and the priority of strengthening democratic resilience in the broader region”, adding, “The participants reaffirmed their mutual support for ASEAN centrality. They reiterated their commitment to the Quad meeting at least annually at the Ministerial level and on a regular basis at senior and working levels to strengthen cooperation on advancing a free and open Indo-Pacific region, including support for freedom of navigation and territorial integrity.” Anthony Blinken tweeted: “I had the pleasure to speak with my Quad counterparts @MarisePayne, @meteging, and @DrSJaishankar. I look forward to deepening our cooperation on climate change and COVID-19, supporting ASEAN centrality, and advancing our vision of a free and open Indo-Pacific.”

The statement from India’s Ministry of External Affairs said that the concepts of the Quad – an informal grouping of India, Japan, Australia and the US – and the Indo-Pacific were receiving growing international support and that the changes in the world were making a strong case for countries to work together. It further stated, “The Ministers emphasized their commitment to upholding a rules-based international order, underpinned by respect for territorial integrity and sovereignty, rule of law, transparency, freedom of navigation in the international seas and peaceful resolution of disputes.” The statement described the exchanges as productive and noted that the discussions on regional issues included a reiteration of their common vision for a free, open and inclusive Indo-Pacific region, with clear support for ASEAN cohesion and centrality. It also noted that the Indo-Pacific concept had gathered growing international support, including in Europe.

The press release from Ministry of Foreign Affairs of Japan stated that the Quad foreign ministers shared recognition that the existing international order has been under challenge in various fields including unilateral attempts to change the status quo, and that the four countries, which share basic values and are deeply committed to reinforcing a free and open global order based on the rule of law, are playing an increasingly important role under such situations. The statement further said that they also agreed that to strongly opposed any attempts by China to alter the status quo in the Indo-Pacific by force or coercion and reiterated their call for a free open and inclusive Indo-Pacific region.

Japan’s Foreign Minister Motegi expressed serious concern with regard to China’s Coast Guard Law, and the Quad ministers concurred to strongly oppose unilateral and forceful attempts to change the status quo in the context of the East and the South China Sea. The release further said, “The four Ministers reaffirmed their strong support for the “ASEAN Outlook on Indo-Pacific”, which is ASEAN’s proactive efforts, and ASEAN’s unity and centrality as well as the ASEAN-led regional architecture. They also welcomed proactive efforts by other countries including those in Europe toward a “Free and Open Indo-Pacific.” Motegi also expressed grave concern for the deteriorating situation in Myanmar.

The Australian statement described the Quad as “bringing together four like-minded democracies committed to respecting and upholding international rules and obligations through positive, practical engagement to protect and support the sovereignty, prosperity and security of the region”. The statement also asserted commitment to Myanmar’s “democratic transition”, while describing the developments in Myanmar a military coup.

Notably, this third meeting of Quad Foreign Ministers had the following peculiarities: India for the first time officially used the term “Quad” to describe its grouping with the US, Australia and Japan in the statement released by the MEA instead of the earlier description ‘meeting of four countries’; Japan named China directly for actions to change the status quo in the East and South China seas whereas India, Australia and the US made no mention of China; US not naming China was in sharp contrast to the Trump administration naming China at every opportunity including in Quad meetings, and; statements by all the four countries mentioned the situation in Myanmar but with differing expressions.

The US not mentioning China directly in its statement could be interpreted in some quarters as the Biden administration’s softer approach towards China compared to the administration of Donald Trump. However, in his first address to global audiences on February 19, US President Joe Biden while declaring that “America is back, the transatlantic alliance is back” had also stated, “We must prepare together for long-term strategic competition with China.” Though Biden was committing to America’s ties with NATO and the EU in his speech, whether this can be applied to the Quad as well is a matter of conjecture.

For all the noise that China makes about the Quad, is Beijing really concerned? Apparently it is with the recent warning in Global Times mentioned above. Moreover, Chinese Foreign Minister Wang Yi visiting Malaysia in October 2020 had stated that the US wants to build an Indo-Pacific NATO through the Quad. On February 19, 2021, the US State Department voiced concern over the new legislation enacted by China that authorizes its coast guard to use weapons against foreign ships that Beijing considers to be unlawfully entering its waters. The US has warned China against the use of force in disputed waters while reaffirming its view that Beijing’s assertive campaign in the SCS is illegal. The US State Department spokesman Ned Price stated, “We remind the PRC and all whose forces operate in the South China Sea that responsible maritime forces act with professionalism and restraint in the exercise of their authorities. We are further concerned that China may invoke this new law to assert its unlawful maritime claims in the South China Sea.”

It is but natural that Japan is more concerned about the East and South China seas and India more about the Indian Ocean Region. But these issues are within the larger Indo-Pacific construct. Initial Quad meetings had no joint statements but the grouping has come a long way. A suitably worded joint statement should be mandatory from the next Quad meeting with or without specifically mentioning China in order to convey a collective stance.

China is in no mood to ease its aggressive ways and will keep using its economic clout to lure or pressure countries. Where its new law authorizes its coast guard to use weapons in illegally claimed waters, it has been using its civilian boat militia to engage foreign pilots with lasers in the South China Sea – same as from its base in Djibouti. Time is more than opportune to go for Quad Plus, for which America needs to take the lead.