Krauss-Maffei Wegmann (KMW) and Rheinmetall handed over on December 6th in time the first two PUMA infantry fighting vehicles to the Federal Office of Defense Technology and Procurement (BWB) in Kassel for verification tests. This marks the start for the contractual delivery of 405 ordered vehicles to the German Armed Forces. The contract with a volume of roughly 3.1 bn € was signed in July 2009. The delivery of the PUMA is a significant milestone for the most important procurement program of the German Army. 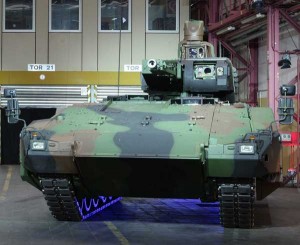 “This is a crucial day on the way of introducing the PUMA to the German Armed Forces. We have undergone a challenging period of research and development, pushing the limits of this technology”, stated Frank Haun, CEO of KMW and Klaus Eberhardt, CEO of Rheinmetall.

No comparable vehicle provides its crew with such a high level of protection from typical conflict zone threats such as landmines, rocket propelled grenades and improvised explosive devices. Well-protected yet light enough to airlift, the PUMA’s modularity and expandability make it the perfect tool for international conflict management. The PUMA, whose main armament and ammunition had to be modified to match the altered threat spectrum, represents the ultimate in lethality and survivability .

Today, more than thirty years after Germany first fielded the MARDER, the PUMA is poised to significantly expand the Bundeswehr’s capabilities spectrum, providing it with an entirely new category of tactical vehicle. In any international comparison, the PUMA clearly represents the cutting edge in contemporary armoured vehicle technology.