Defence deals the world over are regularly subjected to intense scrutiny and investigations. Aspersions are often cast about lack of probity and underhand dealings. In Transparency International’s Global Bribe Payers Index, the defence trade appears in the top three sectors for bribery and corruption. The other two are the oil sector and major infrastructure projects. The US Government estimates that defence sector accounts for almost 50 per cent of all kickbacks in the world, although the arms trade accounts for less than 1 per cent of international trade.

India is no exception. We have had more than our share of controversies and enquiries. Questions have been raised with regard to the procurement procedure followed and commercial improprieties. Though India’s defence imports constitute a very small portion of total trade, they have come to attract disproportionate media attention due to alleged irregularities.

The US Government estimates that defence sector accounts for almost 50 per cent of all kickbacks in the world, although the arms trade accounts for less than 1 per cent of international trade. India is no exception.

It is generally suspected that interested participants can skew the whole procurement process by influencing decision makers by decadent means. What makes Indian defence acquisitions vulnerable to such undue influences? The answer to this critical question can only be obtained by understanding the nature, limitations and peculiarities of India’s arms procurement mechanism.

The Government is fully aware of the need to put a transparent, credible and impartial procurement system in place. It has taken a number of bold and innovative steps. Recommendations of the Parliamentary Standing Committee on Defence, Central Vigilance Commission, Comptroller & Auditor General of India and the Kelkar Committee have also been incorporated in Defence Procurement Procedure – 2006 (DPP-2006). 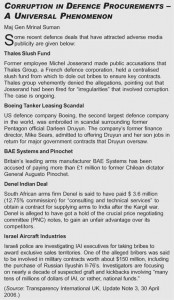 Some of the major provisions which demonstrate Government’s resolve to make the process fair and credible are as follows: