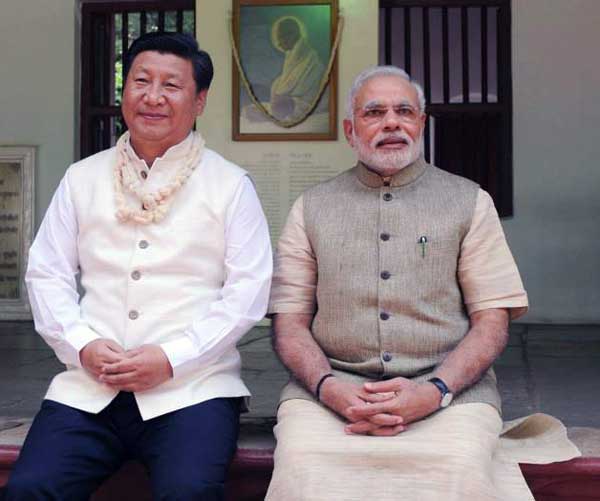 At the Indian Council of World Affairs, the Chinese President hoped that China and India would be the ‘express trains’ driving regional development as well as the ‘twin anchors’ of regional peace. “When China and India join hands for cooperation, it will benefit not only the two countries but also the entire Asia and the world at large,” he said adding, “Nothing is more imperative than to deliver a more comfortable, more secure and happier life to the people.” Once again, the President’s words do not tally with the situation on the ground.

All started well when President Xi Jinping of China landed at the Sardar Vallabhbhai International Airport at Ahmedabad on September 17. He and Peng Liyuan, his beautiful wife (and renowned former Opera singer) had a taste of Modiland. They seemed to enjoy the dynamism and culture of Gujarat as well as its delicacies on the banks of a clean Sabarmati river.

Both India and China wanted to show the world that the two most populated countries of the planet can work together harmoniously. Modi Sarkar had done its homework by sending National Security Adviser, Ajit Doval to Beijing. After meeting President Xi, Doval told the Indian media that the bilateral relations were poised for an ‘orbital jump’. A good sound bite indeed!

The day he arrived, President Xi wrote an op-ed in The Hindu: “As the two engines of the Asian economy, we need to become cooperation partners spearheading growth. I believe that the combination of China’s energy plus India’s wisdom will release massive potential.”

The bar seemed to have been placed very high.

In Ahmedabad, everything went as scripted, though nobody noticed an extraordinary event which occurred a few days before the President’s arrival. Wei Wei, the Chinese Ambassador to India was suddenly transferred (or sacked?) and replaced by Le Yucheng from the Ministry of Foreign Affairs.

The Chumar intrusions were all the more surprising after Xi had gone around selling “The China Dream”.

To replace the chief emissary a few days before his Head of State arrives for such a crucial visit must be a first in the annals of diplomatic history. What was behind this abrupt move? Although it may never be known, this happened at a time when speculations were rife about the fate of the Chinese Ambassador to Iceland who ‘disappeared’ somewhere in China. He was apparently too close to the Japanese. There is probably no link between the two but Wei Wei’s sudden ‘departure’ is rather strange.

The second issue which did not go according to the planned programme was the sudden deterioration of the situation on the Line of Actual Control (LAC) in Chumar in Southern Ladakh. Differences in ‘perception’ about where the LAC lay were known to exist, particularly in this area but as Xi arrived in Ahmedabad, more than one thousand five hundred Chinese troops belonging to the People’s Liberation Army (PLA) and the People’s Armed Police Force (PAPF) crossed the LAC and stood a few metres away from the Indian jawans. The situation has never been so tense for years. Why this show of force at a time Xi Jinping, who is also Chairman of the Central Military Commission (CMC), was trying to instill trust in the bilateral relations? Was there a better way to sabotage the Presidential visit?

President Xi’s visit to India was the last leg of a four-nation journey. The visit to Pakistani was called off due to internal turmoil there. The Chumar intrusions were all the more surprising after Xi had gone around selling “The China Dream”.

He had announced the tenor of visit in his The Hindu op-ed, when he wrote, “As two important forces in a world that moves towards multi-polarity, we need to become global partners having strategic coordination. According to Prime Minister Modi, China and India are ‘two bodies, one spirit’. I appreciate this comment. Despite their distinctive features, the ‘Chinese Dragon’ and the ‘Indian Elephant’ both cherish peace, equity and justice. We need to work together to carry forward the Five Principles of Peaceful Coexistence (Panchsheel) and make the international order more fair and reasonable.” He concluded, “I look forward to an in-depth exchange of views with Indian leaders…and to injecting new vitality to our strategic and cooperative partnership for peace and prosperity.” It is also clear that President Xi was keen to sell the ‘China Dream’, an important component of which appears to be that China is a peaceful and reliable neighbour.

If this was the case, then why to blatantly cross the LAC on the second day of the visit? This has remained unexplained in the unfolding of the events. In Sri Lanka too, Xi spoke of “The Dream” and in an article in The Daily News, Xi affirmed, “Let Us Become Partners in Pursuit of Our Dreams.” In the recent months, whenever he got a chance, Xi spoke of “The Dream”. For example, at the Conference on Interaction and Confidence-Building Measures in Asia (CICA), he said, “The Chinese people, in their pursuit of the Chinese dream of great national renewal, stand ready to support and help other people in Asia to realise their own great dreams.” So, why send 1,500 soldiers across the LAC in Southern Ladakh?

Many observers said that Xi wanted to press some ‘acupuncture’ points on the border, to make his Indian interlocutors aware that the issue is still pending. The border issue is indeed not a new one, it is ‘left-over from history’, as Chinese leaders say. In The Hindu, President Xi had however asserted, “Progress has been made in the negotiations on the boundary question, and the two sides have worked together to maintain peace and tranquility in the border area.” It is true that there is a historical background.

The Chumar operation was clearly a failure, as India could react quickly and amass more than 1,000 jawans in a few hours…

In April 1960, the Chinese Premier Zhou En-lai had spent a week in Delhi to discuss with Prime Minister Nehru “certain differences relating to the border areas which have arisen.” The Joint Communique issued on April 26, 1960, had stated, “The two Prime Ministers had several long frank and friendly talks between themselves.”

It was decided that Chinese and Indian officials would “meet and examine, check and study all historical documents, records, accounts, maps and other material relevant to the boundary question, on which each side relied in support of its stand, and draw up a report for submission to the two Governments.” Five rounds of extensive discussions took place during the following months, with no progress. For the past 54 years, nothing seems to have changed, though as Xi arrived, the situation suddenly took a turn for the worse.

Did Something Go Wrong?

Last year, at the time of the Depsang incident, it was believed that Chinese intrusions could be due to the unfortunate initiatives of some local PLA commanders. I was then told, “It cannot be. PLA generals are a disciplined lot and Chairman Xi is fully in command.”

This time, the same thought again came to my mind. Were some very senior PLA generals unhappy about the thaw between India and China? Or perhaps disturbed about Xi’s fight against corruption? And does it mean that Xi Jinping, the Chairman of the CMC, does not have full control over his Generals? Is it possible that China was speaking with different voices?

China is slowly but surely tightening her grip on Tibet…

An indication that everything may not be rosy for Xi is General Fan Changlong’s visit to Tibet. The General is the Senior Vice Chairman of the CMC and a Member of the Politburo of Communist Party of China. On August 17, The Tibet Daily carried an article saying that General Fan had come for an investigation tour to Qinghai and Tibet. The newspaper reported that Fan “emphasized that the entire army and the armed police must further implement the spirit of the series of important talks by Xi Jinping, must stick to the goal of strengthening the army in this new situation, concentrate on developing skills of war…”

However the main emphasis of his visit (only very briefly reported in the Chinese press in English) was that, “the entire army and the armed police must resolutely implement the strategic deployment by the Central Party and Xi Jinping, staunchly endorse the investigation of the case filed against Zhou Yongkang and the right decision made by the Central Party after carrying out investigation on Xu Caihou.”

Why come to Tibet, just to tell the officers posted on the Plateau to, “…be in unanimity with the Central Party in your thoughts and actions and obey the orders given by the Central Party and the CMC?” while opposing Zhou Yongkang.