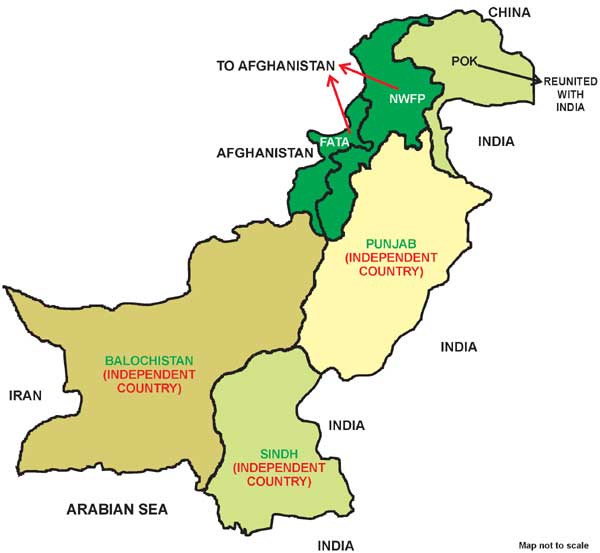 The overall situation appears to be quite hopeless, and under these conditions, it is only the army that can keep the country together. A military state of emergency is therefore definitely on the cards. It is also very possible that Musharraf and Nawaz Sharif (together) may call in the International community (mainly the US) to help, once they realise that they will not be able to handle the militants. But before any of this happens, we will witness considerable policy confusion both in Rawalpindi and in Washington, as both sides desperately hunt for answers.

The Sindhis now have no stake left in the Union

With Benazir gone, the Sindhis, who are mainly into business, have no common interest with either the state of Punjab, the lawless north west (including the Peshawar area), Balochistan or Pakistan Occupied Kashmir. Therefore it’s just a matter of time before they sum up the courage to demand a separate state. There are however issues of mental attitude here as Sindh is not Balochistan. Sindhis are traders , not warriors like the Baloch.

If Stratfors information is correct, it would mean that the US and Europe have no real interest or strategic rationale any more for keeping Pakistan together. They will let it fail as it will then allow them to independently target the militants in the various breakaway states.

Benazir’s killing in Rawalpindi has its own significance too. Rawalpindi is Pakistan’s military headquarters. It is also located in the Punjab and this has implications for near term Punjab-Sindh relations. Sindh has a lot of Punjabi settlers besides a huge Mohajir community. The Mohajirs are Bihari Muslims and the Sindhi’s hate them as much as they hate the Punjabi settlers. The recent chain of events therefore has made a civil war between these rival groups very likely.

If violence breaks out in Sindh, Musharraf most likely will send the (mostly Punjabi) military to Karachi to stop the killing. The military however will itself come under attack in Sindh, as being dominated by the Punjabis they will not be seen as a unbiased force. It could then turn out to be a Serbia/Bosnia like situation. Any military action by Musharraf in Sindh could thus create more problems than it would solve.

For India the main threat is of millions of refugees crossing the international border as a result of the civil war in Sindh. This event that could be just six months or a year away needs to be planned for, and the Indian government will do well to plan the deployment of close to a million men of our armed forces on the western border to prevent a massive refugee problem.

Depending on the severity of the violence, between 4-5 million refugees could cross over the international border into India. They won’t go into Balochistan because it is a desert. Bhuj and Palanpur areas in Gujarat and Barmer in south-west Rajasthan are possible destinations for the refugees, and could be the worst affected. There is therefore an urgent need for a national plan for how to deal with the situation. We also need a clear understanding that refugees will have to return to Pakistan, and any Indian political party that tries to accommodate the refugees only for the purposes of getting their vote needs to be exposed as anti-national. We need to learn from the bitter experience we have had in Assam, and we need to have a proper identification and quarantine plan in place to ensure that foreigners do not get to other parts in the country. In light of the fact that we already have the shameful situation of Kashmiri Pundits being refugees in their own country, I am hoping that our law-makers in parliament see this note and do something to save the state of Gujarat, whose economy could be ravaged by refugees and the lumpen elements that secure entry into the state in the guise of displaced people.

With more hard core fanatics, than there were Nazis in Germany at the height of World War II (Germany had approximately 950,000 men in the Waffen SS at the end of 1943), Pakistan with close to three million Jihadis is far more dangerous.

There are 40 Jihadi publications in Pakistan with an active readership of one million people. This is an estimate of the literate militant following and excludes those who have extremist views but can’t read. Militant strength is also increasing every year as well with recruits coming from the nearly 30,000 Madrassas that exist all over Pakistan. It is a very different country from the one which was born in 1947, when there were just 2500 Madrassas. These numbers are telling us something.

If in WWII, the Germans with just one million hard core individuals could create major problems for the rest of the international community, can anyone guess what three million people are capable of? Can Parvez Musharraf and Nawaz Sharif control these people ? The world needs to get real.

A recent article in Stratfor, a top US journal on strategic matters and geopolitics has claimed that most Pakistani nuclear weapons are already under US safeguards. If this is true it means that Pakistan cannot launch a single warhead without US authorised launch codes. This was earlier reported by a prominent Indian defense analyst in an article on Rediff.com soon after the 13th December 2001 attack on the Indian Parliament. A few hours after the article was published on the Rediff website, it was taken off for some reason. So while there may be some truth in what Stratfor is saying, it is best to assume that the Pakistani nuclear arsenal is still a major threat and needs to be secured.

If Sindh also simultaneously decides to pull out of the union, or if there is civil war in the province, there is no way that the Pakistani Military will be able to fight on two or three different fronts and still keep its troops on the Indian border.

The Stratfor article however has important strategic implications for South Asia , If Stratfor’s information is correct, it would mean that the US and Europe have no real interest or strategic rationale any more for keeping Pakistan together. They will let it fail as it will then allow them to independently target the militants in the various breakaway states.

Balochistan has been wanting independence for a long time now. It is a movement which has found renewed strength since last year when Musharraf killed the Balochi leader Akbar Khan Bugti. The most likely scenario then would be that sensing a weak central government, the Balochis, who are warriors, will make the first move and declare independence.

If Sindh also simultaneously decides to pull out of the union, or if there is civil war in the province, there is no way that the Pakistani Military will be able to fight on two or three different fronts and still keep its troops on the Indian border. This kind of scenario is not impossible. The Pakistani army is already demoralized after the defeat it suffered at the hands of the Taliban in southern Waziristan. In that incident the Taliban captured more than 200 regular army troops, and later released them in what amounted to a humiliating reversal for the army. This may have had a lasting impact on troop morale throughout Pakistan, and in any case, fighting on three different fronts is difficult for any army from a logistical standpoint.

12 thoughts on “Possible Collapse of Pakistan: Quantifying the Fallout”