Popular Front of India - Snake in the Backyard 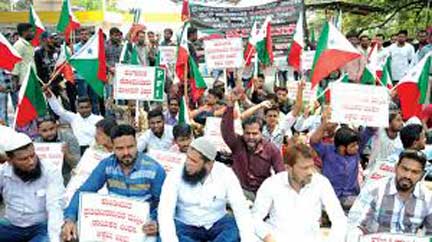 The country witnessed organised loot and arson in different parts of the country post the promulgation of Citizenship Amendment Act, CAA-2019. The protestors were ill-informed but highly charged since they had been fed a false narrative of CAA being anti-Muslim. But when questioned, the majority could not justify their apprehensions or tried to link their fear to extraneous issues.

It was evident that they had been coaxed and their minds poisoned with anti-establishment propaganda based on communal lines. The fact is evident that the CAA had nothing to do with Indian citizens belonging to any community or religion. Who was behind this organised mayhem?

While certain political parties were also very vocal in their opposition to the Act and did play some role in organising the protests and mobilising the crowds but reports suggest that protests were converted into riots by a latent hand. Reports in the media suggest that the latent hand behind the violence was a radical outfit called Popular Front of India (PFI).

From Assam to Uttar Pradesh the hand of PFI behind the violence is being exposed with fresh arrests and intelligence inputs. What is worrying is also the suspected involvement of the banned organisation Student Islamic Movement of India (SIMI).

PFI’s founder leadership had its roots in Simi!! Is something serious brewing and what could be the involvement of PFI in that? To understand all this, one needs to know and understand PFI in detail. The Popular Front of India, an extremist Islamic fundamentalist organisation which started in Kerala in 2006 as a successor to the National Development Front, has spread its base in Uttar Pradesh and played a major role in anti-CAA violent protests in the state as well as other places, catching security agencies off guard.

The latest intelligence input shared by the Uttar Pradesh Police with the Central agencies, and under consideration of the Ministry of Home Affairs (MHA), says that the PFI was active in Shamli, Muzaffarnagar, Meerut, Bijnor, Barabanki, Gonda, Bahraich, Varanasi, Azamgarh and Sitapur areas during anti-Citizenship Amendment Act protests in the state. It has a fully functional unit in Assam and many other states in India with large concentration in Kerala and other South Indian states.

PFI’s activities in Kerala are well documented and remain under the scanner but its growing influence in the other states and the fresh alliances it is establishing with disruptive and extremist groups operative in those states is a cause of major concern. Binay Singh, an eminent social activist describes PFI as a “Menace in Disguise.”

Popular Front of India was formed in 2006 in Kerala as a successor to National Democratic Front (NDF). “NDF in its new avatar of PFI is pursuing a secret agenda camouflaged by an exterior human rights facade, with its founding leaders groomed deep in SIMI ideology,” says a secret document prepared by the National Investigation Agency (NIA).

Initially PFI started as successor to NDF in Kerala but later began to expand through merger with small extremist groups in other states having similar ideology to obtain a multi-state dimension. It merged with Karnataka Forum for Dignity (KFD) of Karnataka and Manitha Neethi Pasarai(MNP) in Tamil Nadu. Later in 2009, it merged with Goa’s Citizen’s Forum, Rajasthan’s Community Social and Educational Society, West Bengal’s Nagarik Adhikar Suraksha Samiti, Manipur’s Lilong Social Forum and Andhra Pradesh’s Association of Social Justice.

It has sister organisations like Rehab India Foundation ,Indian Fraternity Forum, Confederation of Muslim Institutions in India , Muslim Relief Network (MRN) and Sathya Sarini. Most of these organisations act as its front organisations and are major sources of gathering funds and donations from other countries mainly the petro-dollar rich countries. It also has links with Pakistan’s notorious Inter Services Intelligence (ISI).

PFI has officially maintained that it is involved in issues such as Muslim reservations, personal law courts for Muslims, the cause of Dalits, Sikhs and tribals. PFI also works in cooperation with the ‘National Confederation of Human Rights Organisations (NCHRO)’ and other human rights organisations. But all these activities are meant to give a camouflage to its main agenda, which is to destabilise India. PFI, unlike older avatars, is extremely well funded and has been steadily building assets —media studios, newspapers, publications and schools.

It also has a well- established social media network that was used in 2012 to launch a SMS hate campaign in South India threatening the people from North-East to leave or be prepared for dire consequences. It created a scare among the youth from the North Eastern States and resulted in an exodus of about 30,000 people from important educational hubs in the South as well as from Delhi and Pune.

A later enquiry revealed that 28-30 percent of these messages were uploaded from Pakistan, establishing its links with Pakistan. The social media network is reported to have been used extensively during the current riots to galvanise the cadre and miscreants.

Like the JuD in Pakistan, PFI also claims to be a missionary organisation with neo-social ideals committed to empower people to ensure justice, freedom and security. It has a student wing and a women wing to cater to different sections of the society namely the Campus Front of India and National Women’s Front.

PFI believes in ISIS/Taliban type of Islam and has been blamed for killings of many CPI (M) cadre, RSS and ABVP activists and leaders. It is believed to be responsible for radicalisation in Southern Indian states particularly North Kerala. Various acts of religious extremism, including the assault on Professor T. J. Joseph who had set a controversial question paper supposedly insulting the Prophet Muhammed are also attributed to PFI.

NIA in its secret report has indicted PFI by quoting four specific incidents it investigated. Four cases in which the PFI is said to be involved are chopping of a professor’s wrist in Kerala’s Idukki district, the murder of Rudresh an RSS leader in Bengaluru, the Islamic State Al-Hindi module case plotting attacks in south India and the case of an ongoing training camp in Kannur from where bombs, IEDs and swords were recovered.

An organisation with a well-oiled and well-knitted machinery to meet its violent ends, the outfit has squads of trainers, experts in making crude bombs and IEDs, an intelligence wing and actionable squad. The PFI has training centres in strongholds where training on martial arts and indoctrination is conducted.

PFI is actively involved in sowing the seeds of jihad among its cadre. Camouflaged behind all this is its core ideology of ‘Muslim Strength, Muslim Unification’ to destabilise India. Intelligence agencies have claimed role of PFI in the 2011 Mumbai bombings, 2012 Pune bombings and 2013 Hyderabad blasts.

Ever since the idea of “New India” was announced by PM Modi PFI has been asked by its mentors and financers sitting abroad to increase its activities nation-wide to derail the idea and ensure that it does not succeed at any cost. Reportedly, there are links between PFI, one UP based political party and the banned SIMI. The links are resurfacing during the ongoing investigations of riots in UP. It is believed to aggressively pursue its hidden Islamic agenda including countering of the so called anti-Islamic forces.

During the anti-CAA agitation, a video went viral. The video contained the speech of a PFI leader who while addressing a gathering at Calicut in Malayalam apart from espousing communal hatred went on to say, “we will decide whether there should be peace in India or not…..” The leader continues to roam freely and spread the agenda of hatred and destabilising India.

The PFI’s political wing, Social Democratic Party of India (SDPI), already has a significant following in Kerala, Tamil Nadu and Karnataka. The PFI’s formulations of “total empowerment” for Muslims, Dalits, Adivasis and other Hindu Backward Castes have connected them with other Muslim political groups and parties.

The Asom United Democratic Front (AUDF), led by perfume magnate Maulana Badruddin Ajmal, has declared solidarity with the PFI. The AUDF, with 14 MLAs in the 126-member Assam legislature and a 13% vote share is a significant player in Assam politics. Political midgets like the MilliEttehad Parishad in West Bengal and the Tamil Nadu Muslim Munnetra Kazhgam (TMMK) have joined the PFI-led national alliance of Muslim groups and parties.

Much of this comes from the PFI’s Kozhikode conference in 2017, which was also attended by the then Vice President of India, Mr. Hamid Ansari. There, Ebrahim Rasool, then advisor to the South African President, energised the PFI leadership with a simple proposition: “Muslims in South Africa account for 3 percent of its population, but have 15 percent representation in Parliament. If we can do it, why can’t the 13 percent Muslims in India do the same thing”?

Apart from its involvement in extremist and political activities, the organisation is also actively involved in radical activities like conversion including marriages. It systematically runs “Da’wa” centres through a network of Da’wa workers to introduce Islam to non-Muslims. While PFI claims them to be ‘religious propagation and education centres’, many believe them to be conversion centres.

NIA in its report claimed that the PFI is a “threat to national security” and is using outfits like Sathya Sarini in Malapurram to carry out “forced conversions”. Meanwhile, Green Valley Foundation was serving as place for secret meetings of cadres and reportedly running anti-national activity. Another danger is the common platform which the organisation shares with Maoist and Dalit extremist organisation like the Bhim Army.

PFI is expanding base pan-India by spreading a belief among the Muslims, Dalits and Adivasis that they are being cheated by the political parties. It is a major cause of worry. The new found nexus of PFI and Bhim Army is likely to turn into an armed insurgency in UP and Bihar. It is also known to be reviving contacts with Khalistanis at the behest of ISI to revive the Khalistani movement in Punjab. PFI’s soft corner and association with the Rohingyas is also well established.

Some of the PFI cadre had also gone to Syria to join the ISIS. With the disintegration of ISIS many of them must be looking to sneak back into Kerala. The intelligence agencies should remain on a very high alert to beat this desire of theirs, else they could become the mastermind of jihadi movement in India since they are very highly indoctrinated.

The growing pan-India axis between the PFI-Dalits and Adivasis is a grave and serious threat to national security. Unless dealt with an iron hand straightway there is every likely hood of PFI posing a grave challenge to nation’s unity. The organisation should be declared a banned organisation and action taken to demobilise and de-radicalise its cadre.