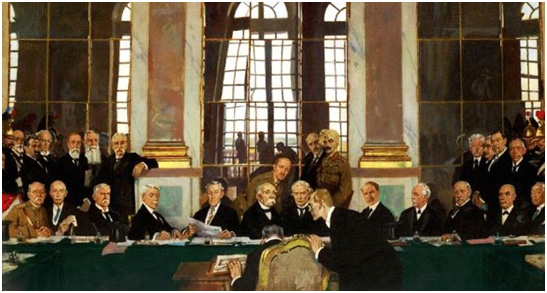 The year 2018 marks the centenary of the end of World War I. ‘The War to End All Wars’ or ‘The Great War For Civilisation’ did not achieve what the belligerents or its protagonists imagined. Neither did it end ‘Before Christmas’, as the British expected, nor ‘Before the Leaves Fall’, as per the German objectives. The Armistice to stop fighting was signed at 11am on the 11th day of the 11th month of 1918 in the railway carriage of Marshal Ferdinand Foch in the Forest of Compiegne north of Paris. Hitler had the French sign their surrender in the same carriage in World War II. The Treaty of Versailles signed on 28 June 1919 ended the war between Germany and the Allied Powers. 11 November is commemorated as Remembrance Day. 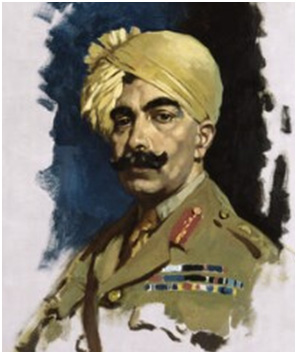 Major General Ganga Singh, the Maharaja of Bikaner, had been a member of the Imperial War Council in 1917. India was a separate signatory to the Treaty of Versailles in 1919 at the end of the Great War, and a founding member of the League of Nations. It was the only non-independent territory to have this status. As a signal honour, Ganga Singh was the sole Indian or ‘non-white’ representative at the signing of the treaty. The iconic painting The Signing of Peace shows an imposing Ganga Singh in uniform with the traditional safa.

The Great War was dominated by technological developments of the barbed wire, heavy and massed artillery, magazine-filled rapid-fire rifles and belt-fed machine guns. All contributed towards the butcher’s work. The industrialised fighting changed the very nature of war. For the record, about 70 million military personnel were mobilized and 16.5 million killed. Of the million horses employed, only 60,000 survived. India provided 1,73,000 horses, mules and camels for the war and recruited 14,40,437 men, sent 13,81,050 for service overseas, of which 74,187 officers and men were killed and another 70,000 wounded. Of the killed, 13,516 names are inscribed on the India Gate Memorial, New Delhi completed in 1933. India bore the cost of these men, besides an outright contribution of £100 million towards the overall war effort. India’s contribution was never fully acknowledged by Imperial Britain. Independent India remains indifferent labelling it as ‘not our war’ and participating very reluctantly in events commemorating the centenary of the Great War.An Indian soldier wrote home from the Western Front:

And so the war is raging by sky and land and sea,

And underneath the water, five kings are fighting three

And only the hurt, the maimed and blind will ever see home again.

— Shrabani Basu For King And Another Country 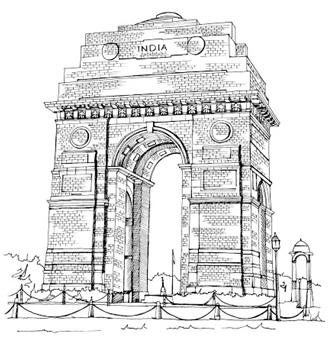 Renewed interest and research prompted by the War Centenary 2014-18 has thrown up details and material on India’s critical role and contribution, especially in the initial phases on the Western Front and in the closing stages in the Middle East. This is now accepted and finds expression in recent writings about the First World War. While the larger issues of empire, colonialism, class and its effect on an entire generation impacted the world at large, The Great War also left some memorable terms and phrases on the military and everyday lexicon which endure till today. Even vernacular languages felt the effect. When the German warship Emden, prowling in the Bay of Bengal, shelled Madras harbour and the city on 22 September 1914, causing panic and mass evacuation of the population, it brought the war to India before the Indian troops went into action on the Western Front. The Tamils, evidently impressed with the demonstrated German capability, coined a new word – Emden meaning ‘an enterprising, resourceful and meticulous person’. Sikh soldiers returning from the war and similarly impressed by officer ranks went on to name their children Kaptan, Major, Karnail and Jarnail Singh. 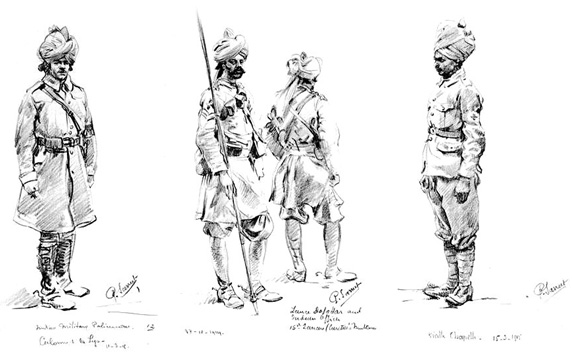 By 1916, the unprecedented scale of casualties wrought by the industrialised fighting had cast an all-pervasive sense of loss. Newspapers carried pages of black print listing the casualties.The desire to remember and commemorate the war dead became a strong public sentiment.

For the Victory Parade on the second anniversary of the signing of the Armistice, a plaster and wood Cenotaph designed by Edwin Lutyens was erected in front of Whitehall, London, to commemorate the war dead. It was intended to be a temporary structure to be dismantled after the parade. However, strong public sentiment demanded that it be made permanent. It was accordingly reconstructed exactly in stone. Similar cenotaphs were to come up later in commonwealth countries worldwide.

David Railton, an Army Chaplain on the Western Front, was deeply moved by seeing a grave in 1916 marked with a makeshift cross with a pencil written ‘An Unknown British Soldier’. By 1918, the sheer numbers of such graves had overwhelmed him. In 1920, he suggested that an unidentified soldier from the battlefield of France be buried in Westminster Abbey ‘Amongst the Kings’ to honour all the unknown dead of the war. Prime Minister David Lloyd George strongly supported the idea. King George V too felt that the unknown soldiers must be honoured as they had died ‘For King and Country’.

To select the ‘Unknown Soldier’ four bodies from unmarked graves from the battlefields of Aisne, Somme, Arras and Ypres were exhumed and placed in identical coffins and covered with the Union Jack in a makeshift chapel near Arras on 09 November 1920. The same night the local military commander went into the chapel and placed his hand on one of them. This was sealed with iron bands and the other three re-buried. The coffin was carried with due ceremony aboard the Cruiser HMS Verdun and brought to England. On 11 November the coffin, placed on a gun carriage and escorted by Field Marshals, Admirals and Marshal of the Air Force, was brought to the Cenotaph. Silent crowds lined the streets, and a Field Marshal’s 19-gun salute was fired. The King unveiled the Cenotaph at 11 am on 11 November 1920 and placed a wreath on the coffin which was then accompanied by him to Westminster Abbey. Outside the Abbey, a Guard of Honour composed of 100 gallantry awards recipients, including 74 VCs, saluted the coffin. The body was lowered into the Abbey floor and covered with earth brought from the battlefields of France. It soon caught the public imagination, and more than 1.25 million people filed past in the next one week. Since 1923, Royal Brides married at the Abbey have their bouquets laid on the tomb the day after the wedding.

Lieutenant Colonel John McCrae, a Canadian, seeing poppies near the grave of his dead friend, in lament wrote In Flanders Field

In Flanders fields the poppies blow

Between the crosses, row on row,

That mark our place; and in the sky

Scarce heard amid the guns below.

In Flanders Field struck a chord with the public and poppies soon came to be associated with the war dead. Poppy wreaths are today symbolically laid on war memorials. Some countries like Canada have a poppy imprinted on the car number plate to signify the owner as a veteran.

Remembrance Day – 11 November – identified with The Cenotaph and the Unknown Soldier, and linked to the poppy, is also called Poppy Day.

Indian casualties from the Western Front were evacuated to Southampton and brought to Brighton where military hospitals for the Indian Army were set up. Those dying at Brighton of wounds were cremated nearby in Patcham. At the site of cremation, The Chattri Memorial was erected, a first of its kind to the members of the Indian Army who fought in World War 1. It was dedicated on 21 February 1921. The local newspaper recorded: ‘For East came to West in a strange romantic way when, on these Sussex Downs, the ashes were burned of Hindu warriors born in remote villages in faraway Hindustan, for whom the wildest imagination could never have suggested at their birth that their funeral fires would be fanned by the winds that swept these Sussex hills’.

This man in his own country prayed we know not to what Powers.

We pray Them to reward him for his bravery in ours.

The plan for the new capital of Delhi envisaged some form of a commemorative arch at the end of the West-East ceremonial boulevard (King’s Way now Rajpath) starting from the Viceroy’s House (RashtrapatiBhavan). Prompted by Indian nationalists, the Imperial War Graves Commission gave it a concrete shape by proposing an All India War Memorial.

Lo! I have flung to the East and the West

Priceless treasures torn from my breast,

And yielded the sons of my stricken womb

To the drum-beats of the duty, the sabres of doom.

Silent they sleep by the Persian waves,

They lie with pale brows and brave, broken hands,

They are strewn like blossoms mown down by chance

On the blood-brown meadows of Flanders and France.

Edwin Lutyens, the main architect of New Delhi and a member of the IWGC, designed the memorial based on the Arc de Triomphe of Paris. The symmetry is derived from a square divided into three horizontal and vertical sections. The central section of the nine squares encloses a circle the upper half of which is the arch of the structure. Unlike the Arc de Triomphe and other similar monuments, it does not have any figural decorations. Two huge sandstone urns with stone pine cones growing out of them signify heroic death and rebirth though these are Roman concepts and alien to any Indian symbolism. The 42 meters high and 9.1 meters wide red sandstone structure has a shallow bowl on top intended to be filled with oil and lit on special occasions to signify holy smoke, but has rarely been used as such. Names of 13,516 war dead, representative of all the war dead, and who have no known grave are inscribed on the memorial. It has become our ‘Tomb of the Unknown Soldier’, so to say. A National War Memorial, under construction nearby, shall be Independent India’s commemoration of the war dead.

In India we do not have any symbolic association like poppies to remember and commemorate the war dead, though in our tradition and culture marigold flowers find prominence both to celebrate and to mourn. In Indian life, colours hold an especial importance. White is widely accepted as the colour of peace and purity. Yellow symbolizes sanctity and therefore yellow marigold flowers are used on auspicious occasions while Saffron, a soft orange colour, represents courage and sacrifice.

The Armed Forces Flag Day observed on 7 December since 1949 is the only official annual event related to the soldier. It is a day dedicated to collection of funds from people for the welfare of the Armed Forces personnel.Perhaps it would be appropriate to institute the Saffron Marigold as our symbol of recognition of the dead soldier and upgrade the Flag Day into a Remembrance Day, and maybe unveil the under construction memorial on the same day.