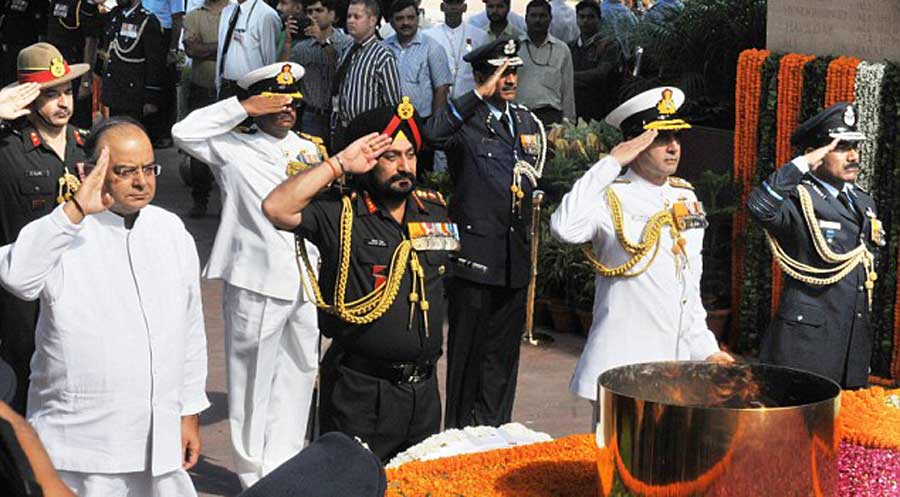 Analysis of India’s approach towards its National Security reveals an unacceptable hiatus between the Political -Civil- Military systems. We perhaps were lucky enough to get away thus far even despite the 1962 China debacle.

The Army, Navy, Air Force are engaged individually in terms of turf protection. There is neither integration nor coordination between the Ministries of Defence, Home, Finance, External affairs with the army, paramilitary and intelligence forces, even as a concept, let alone in practice.

New security realities, an assertive China, a highly probable Sino-Pak collusion, the emergence of non state actors, possible implosion in Pakistan, the Af-Pak mess all call for India to review and revamp its management of national security. Our bureaucracy has the sagacity, expertise and eclectic experience to optimise civil control mechanisms under political guidance. Our military and security forces have the commitment and wisdom to perpetuate democracy and secularism. Ours is a democracy wherein civil control of the military is absolute. We have mechanisms in place to optimally approach “national security and military readiness”. This of course has to be politically understood, accepted, absorbed and be top down with sense of ownership, accountability and authority. This paper looks at the quantum and quality of civil- military participation, the higher defence decision making, the structures within the military and the way ahead.

Indian political -civil- military relationship needs to be seen in the context of the critical dichotomy between “Authority and Responsibility” resulting in the absence of ownership for military and security. The whole discussion often misses the forest for the trees. In the fog of this debate, the political leadership virtually goes unnoticed and hence never answers for this grave omission. Should our political leadership not take onus of ownership or at least assign responsibility for military and security readiness to an accountable entity? Six decades post independence has not seen any effective viable change.

Civil and military partnership needs to be seen in wider contours of nation’s Management, national security, foreign policy, technology self reliance, budgeting: in the frame work of sovereignty, sustainability and survivability as a nation state. It should also include internal security concerns. Intelligence and policing are inherent in this.

Who is Responsible for Readiness?

The Government of India rules of business are distinctly vague on responsibility, accountability of military preparation and readiness. Extracts from the rules of business and MOD website reproduced below, clearly highlight this:

“Defence of India and every part thereof including preparation for defence and all such acts as may be conducive in times of war to its prosecution and after its termination to effective demobilisation.”

The collateral, attendant impact on the Military and Security scenario is dependent upon the quality, quantity of ownership by the Political- Civil- Military combine in Higher Defense Decision Making.

“The Defence Secretary functions as head of the Department of Defence and is additionally responsible for co-coordinating the activities of the four Departments in the Ministry.”

The above extract does not mention ‘preparedness or readiness’ even in passing not to speak about the much needed deliberation. It is silent on ‘Accountability and Answerability’.

Security, Sovereignty, Stability of a Nation is clearly a leadership mandate- how it chooses to exercise and execute this, is, its prerogative. Why it remains passive has not been questioned either by the establishment or by the people.

The Army, Navy, Air Force are engaged individually in terms of turf protection. There is neither integration nor coordination between the Ministries of Defence, Home, Finance, External affairs with the army, paramilitary and intelligence forces, even as a concept, let alone in practice. Guarding the turf is a solemn obsession. What started as a practice became a habit and is now an addiction. The divide on the concept and role of the Chief of Defense Staff within the three services is sharp enough for the polity to justify its passivity. The IDS Headquarters under the CISC- Chief of Integrated Staff committee is gamely trying to pull the services together and over the last 7 years or so has been proved to be useful. This vindicates the need for a CDS. However, the Naresh Chandra Task Force has recently recommended a permanent Chairman, Joint Chiefs of Staff which is a climb down from the CDS. It is also not very clear as to what powers would CJCS have to enforce/enable integration and jointness.

A Taliban take over is most likely, no sooner than the withdrawal of the American led NATO military. The fall out has serious implications in the region. Civil and Military participation in synergy must come into play sooner than later.

The collateral, attendant impact on the Military and Security scenario is dependent upon the quality, quantity of ownership by the Political- Civil- Military combine in Higher Defense Decision Making. This has direct correlation with India’s security calculus, effective military preparation, and readiness. Internal security strategies too, are contingent on the construct of Civilian – Military- Security equations and equity. Our bad neighbourhood is slipping into a vortex of visceral anarchy beyond reason and control. In the North East, China makes us nervous by its rapid and robust build up. Sino- Pak collusion is on the cards. Both may decide to make a play together, to stir the already simmering South Asian Security pot. The Afghan-Pakistan region is also fraught with various probabilities of dysfunctional anarchy. A Taliban take over is most likely, no sooner than the withdrawal of the American led NATO military. The fall out has serious implications in the region. Civil and Military participation in synergy must come into play sooner than later.

“Power relationships between Nations are constantly changing, and unless a country understands and adjusts itself to the changes that are taking place around it, its own Security will be seriously endangered” An extract from Sardar K M Panikkar’s Annual Day address to the Indian School of International Studies on 13 February 1961

Examination of our Higher Defense Decision Making Organisation, readily reveals a witting “Six decade status quo syndrome” perpetuated by the way we are as Indians; fatalistic about our Indian-ness and independence. The implications of this on our sovereignty, security, stability, status as a secular Democracy can be understood, absorbed and be acted upon only if the top leadership grasps this with firmness and dynamism. 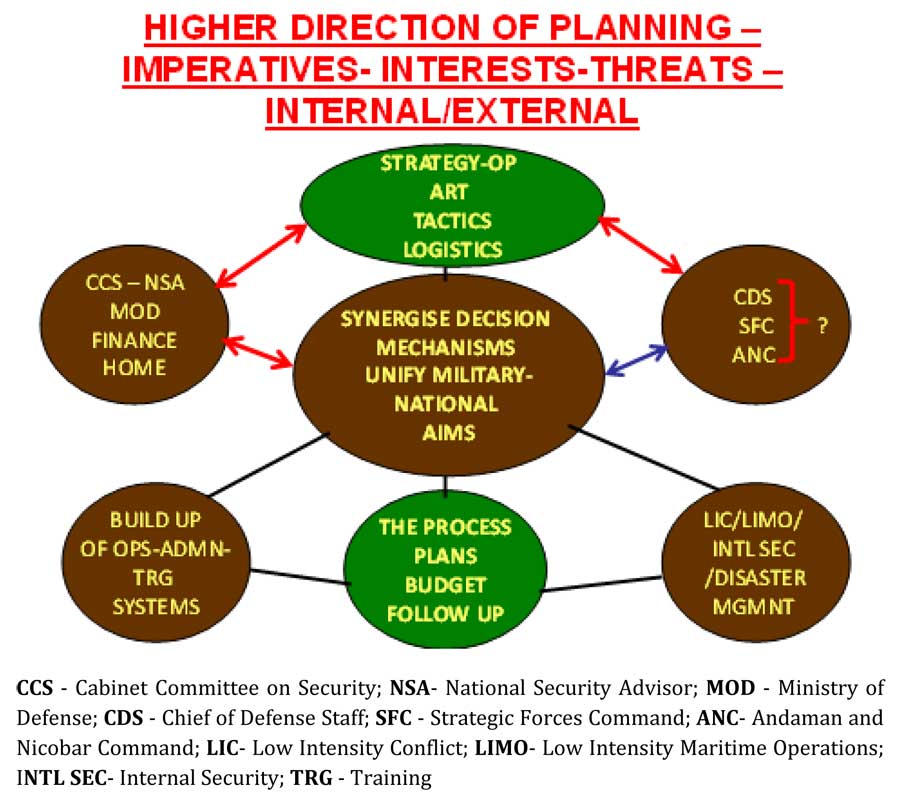 The above schematic is the writer’s imagination. In practice the circles exist but are mostly in separate orbit. At best there are some committees of secretaries and the CCS who deliberate upon important issues on a need based continuum. The military may or may not be called in all deliberations.

The senior Indian Army hierarchy understandably behaved more like proper soldiers than statesmen. They believed in their leadership to do the right thing. What the former laid down then, continues even today.

The origin lies squarely in the Nehruvian mind set at the time of Independence. The Political leadership felt uncomfortable with the British model of command and control. The Bureaucracy too perceived that its primacy was sacrosanct in a democracy. Hence in the euphoria of independence, the Commander in Chief of the military was sectioned into the three chiefs of the three services. The promise of concurrent reorganisation of the Ministry of Defence is yet to be realised.

The naiveté of the British cloned, Army dominated Indian military leadership was perhaps an unwitting factor.

Ensconced in the cantonment and surrounded by the splendour of fife and drum beat, it did not understand the obvious, apparent difference between being “apolitical and politically obtuse”

The senior Indian Army hierarchy understandably behaved more like proper soldiers than statesmen. They believed in their leadership to do the right thing. What the former laid down then, continues even today.

It’s approach to civil relations is always confined to a very narrow swathe of the defence ministry. Personnel of the armed forces are conditioned to be indifferent and sometimes with apathy towards the political class. Somehow, that they are people and citizens too, and not a class apart is overlooked in their education. In turn, the polity is comfortable with managing military affairs through the proxy of bureaucracy. Who should educate who, and on what, of the mutual, political & military education remains ignored.

The quality and value of our Civil- Military bureaucratic relationship reflects; our inability to internalise India in terms of national perspectives.

Our leadership and bureaucracy adopted the whole works of the erstwhile English Raj through the aegis of the civil services without any consultation with the military. Both believed that the British model was suitable with minor modifications, excepting the military aspect. The euphoria of independence, the challenges of ruling a geo politically united India, infatuation with an English way of life, and dealing with the real politick of governance ensured that the rules of business on national management precepts were not properly thought through. Great Britain left behind a robust system that made lot of sense gave order and form with a strong legal base. Yet it was designed to take away wealth from us and hence in principle not compatible to our culture, tradition and age old valid systems. This has been adequately proved time and again in the way the land has been sub optimally governed. The system is “INDIA” dyslexic, people unfriendly and not result oriented. Government profligacy and inefficiency are in tandem in the maze of complicated red tape.

Lack of political direction and a loose limbed hands off approach, queers the pitch of military readiness. Consequently civil military bureaucratic relations exist under best conditions of polite detached, ” Us versus Them” and diffused accountability.

The first warning that all was not well in this arrangement, was during the ill fated 1962 Sino-India conflict. Despite the lasting trauma of that battle, The Indian establishment continues in the same ilk. Despite all the conflicts with Pakistan and the imposing Chinese posture , the whole Political- Bureaucratic-Diplomatic- Military- Intelligence- Technology-Industrial community has not been able to get its act together! Working in watertight silos is both style and form today.

The quality and value of our Civil- Military bureaucratic relationship reflects; our inability to internalise India in terms of national perspectives. Consequently our externalisation tends to be tentative and confusing to us and outsiders. Drifting along with events as they occur seems to be our preferred option”