The latest flash-point between The People’s Liberation Guerrilla Army or naxals in the Lakhisarai forests of Bihar is a tell-tale indicator of the state of preparedness of the Indian police and para-military forces to combat the rapidly expanding Maoist insurgency. According to Home Minister P Chidambaram, 223 districts across 20 states (out of a total of 636 districts in 28 states and seven Union Territories) are thus affected. General VP Malik in a recent write-up described this as follows: “A situation of “consistent violence” exists in about 400 police station areas of 90 districts in 13 states.

The Maoists have threatened that they would “expand their activities to wider areas, mobilise wider masses, gather new momentum and get new dynamism” in the wake of multi-state counter-insurgency operations launched against them. In recent months, no week has passed without an armed encounter or a casualty. In 2009, there were 998 fatalities, 312 of them police personnel. The fatalities this year have already crossed 885, which include over 200 policemen. The number of policemen who have laid down their lives is very large when compared to the success achieved in such encounters.”

Four Bihar policemen – Tete, Abhay Kumar Yadav, Rupesh Kumar Sinha and Ehsan Khan – were kidnapped by Maoists after a six-hour gunfight in Lakhisarai district Aug 29, in which seven policemen were killed and 10 injured. Maoists claimed the gunfight was in retaliation for the killing of their leader Cherukuri Rajkumar alias Azad and a journalist on the night of July 1-2 in Andhra Pradesh. 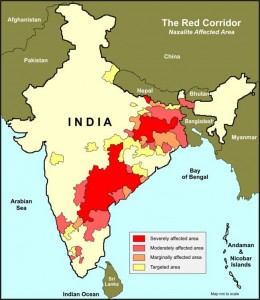 The rebels threatened that the policemen would be killed unless eight jailed Maoist leaders were released. A day after rebels said that they had killed one of the abducted policemen, Tete’s body was found in a jungle in Lakhisarai on Sep 3.

The other three were released on Sep 6. Eight days after the three police personnel were released unharmed the Bihar Police claimed that it had arrested a Maoist, Boro Koda, suspected to be the killer of the fourth abducted policeman, Lucas Tete. Bihar Police chief Neelmani said that Boro Koda was arrested from Lakhmipur area in Jamui district.

“My family negotiated with the naxals for my release.”

These statistics clearly show that the Bihar police does not have the gumption or training to take on the Maoist insurgents. I am pleading you with folded hand, please let me go home. I will not accompany you to the police station. I don’t want to be in police. This is what Abhay Yadav told Lakhisarai Superintendent of Police, Ranjit Kumar Mishra after his release by the PLGA cadres on September 6th.

Eventually Lakhisarai’s recently appointed SP forced Abhay, Rupesh Sinha and Mohmmad Ehsan Khan, to take a detour to the Lakshisarai police station for a debrief session. These policemen survived an eight-day ordeal as captives of the People’s Liberation Guerilla Army (PLGA) in the Lakhisarai hills. PLGA is the armed wing of the Communist Party of India (Maoist) and is popularly referred to as ‘naxals’. It is unlikely that Abhay will give up his job. Employment in the government service, especially police, is a coveted job because it brings in unaccounted wealth. “I want to leave my job. But my family will decide,” Abhay told Indian Defence Review. “Dheeraj Rakhiye” (Please be patient), these words were used every time a senior police officer spoke to policemen in the lower ranks. But each expression of “Dheeraj Rakhiye” brought despair and a sense of inadequacy to policemen in Lakhisarai, Jamui, Munger and Banka. In some portions of the densely forested hills connecting these districts several teams of Bihar Police and the CRPF staged short bursts of combing operations to trace the kidnapped policemen. Some policemen, like Jawaharlal Singh, assistant sub-inspector, Jamui police station and General Secretary of the Jamui District Police Association berated curious villagers: “Your netas (political leaders) are responsible for naxalism. They create the problem, they use naxals for political one-upmanship and we have to face the brunt of it.”

One thought on “Police cannot take on Maoists”