PLAAF: Rising Challenge for the IAF 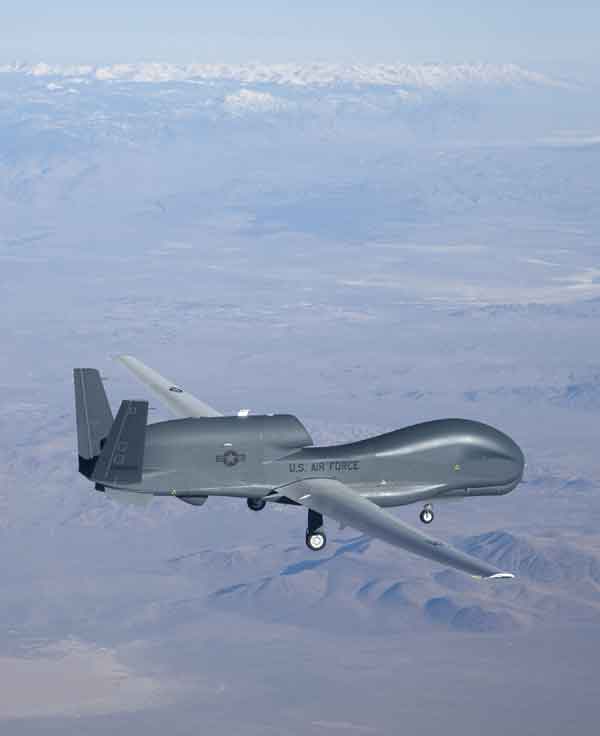 The PLAAF and PLA appear to be going in for these platforms in a big way. Currently, they possess a variety of UAVs, some locally produced and others imported from Israel. Unmanned Combat Aerial Vehicles (UCAVs) such as the GJ1 and WJ1 have a Medium Altitude Long Range (MALE) Reece capability as well as an Attack capability with satellite-guided glide bombs. The prototype of the Lijan Sharp Sword stealth UCAV reportedly undertook its maiden flight in November 2013. It could be similar to the US X47 and the French Neuron. It is part of a family of low observable UAVs called AVIC 601-S being developed by Shenyang Aircraft Design Institute.

To use air power effectively, the IAF will have to achieve and maintain a favourable air situation in the area of operations…

Another project is the Divine Eagle Surveillance & Targeting UAV, akin to the US RQ4 Global Hawk. It reportedly has stealth features, weight of 15 to 20 tonne and speed of Mach 0.8 at 25 km altitude. It will provide targeting information to the DF21 D anti-ship ballistic missile, a land-based weapon with maneuverable re-entry with conventional and nuclear 300 KT warheads for use against carrier battle groups up to 1,500 km away. The first flight was in 2015. Some UCAVs in service could be supplied to Pakistan as other systems have been earlier.

HQ9 and HQ18 SAMs similar to the Russian S300 with 200-km slant range and 27-km ceiling employing an AESA radar, were inducted in 2001. There are around 300 launchers and 1,600 missiles in the inventory. Russian S400 SAM systems with ranges up to 400 km are also being acquired. In addition, older generation and shorter range SAMs like the HQ16 system similar to the Russian SA11/17 and the HQ12, similar to the US Standard SAM, are deployed in quantity along with older derivatives of Russian SAMs.

This was a weak area till the late 1990s. The military now has a range of surface-to-surface, surface-to-air, air-to-air and air-to-surface weaponry with various active and passive guidance systems. All their modern aircraft are capable of carrying PGMs.

The PLAAF’s latest White Paper emphasizes the need for enhancing capabilities in these areas. China already has an advanced electronic components manufacturing base. Cyber attacks originating in China have been carried out to bring down foreign networks in the recent past. The targets are economic information systems, military C3I systems and weapon guidance systems. The capability to disrupt GPS systems has been reported. China also has an anti-satellite missile capability to destroy satellites in low earth orbit.

India does not have a submarine-based IRBM capability as yet…

China aims to develop areas in Tibet, open it up to modernisation and induct Han Chinese to change the demography of the region. The eventual goal is to make the area a hub between China and Southern Asia. The construction of the Golmud–Lhasa rail link at high altitude on permafrost is an engineering marvel made feasible only by supply of General Electric high power locomotives from USA. Another line is from Lhasa to Shigatze and Eastwards to Nyinchi with an extension to Dromo near Nathu La.

The Quinghai–Tibet Central highway from Xining to Lhasa, the Lhasa-Xinjiang Western highway connecting Xinjiang to Tibet, the Sichuan-Tibet Eastern highway from Chengdu to Linzhi (Ngiti) opposite Arunachal Pradesh and the Yunnan-Tibet highway branching off from the Eastern highway, all facilitate rapid induction of forces and lateral movement opposite borders with India. With this infrastructure, it would be possible to move numbers of troops and quantities of material into TAR at a rate that India cannot match on own side of the border and sustain operations provided the rail, road and oil pipeline links are not disrupted.

The distances between China proper and these MRs are much greater than those between the Indian plains and the Chinese border on the Indian side. This area, especially the communication links, is vulnerable to air as well as ground attacks by specialist troops. Rail tracks on permafrost are vulnerable to thermobaric weapons.

The PLAAF has approximately 150 air bases. In India’s area of interest in Tibet, there are at least five large bases with 15 surrounding ones. About ten more are under construction. All airfields in Tibet obviously have a dual role. Civil aircraft of the B777, A330 and A340 classes can operate in the main civil airfields. Some of the military bases have hardened shelters. All have long runways, some extending to five kilometres to cater for the requirement of longer runways at high altitude. Some airfields such as Linzhi (India-China-Myanmar tri junction) are near the border. In 2013, SU27 fighters have operated from fields like Gonkar at 16,000 feet altitude. Numerous helipads and Advanced Landing Fields (ALGs) have been built for operations by the PLA.

Aircraft performance decreases rapidly with altitude and operations from TAR airfields impose severe restrictions on the amount of fuel and weapons carried. This makes aerial refueling a necessity to carry acceptable weight of weapons over worthwhile distances. Aerial refueling tankers are in short supply and are also required in other MRs given the size of China and the necessity to base critical air assets deep inside and as far away as possible from land borders or the coast.

It is clear that the PLAAF has the equipment and infrastructure to pose a threat to Indian forces on the border and to infrastructure further in depth. The Second Artillery has the capability to target the whole of India. The Chinese military is switching over to an offensive doctrine and is preparing to engage in short duration localised military conflicts to extend national hegemony or to resolve territorial disputes, especially in areas where their vulnerability is low and the adversary does not have a significant military capability.

The threat of nuclear strikes on population and industrial targets by assets of the Second Artillery will also exist.

Their Eastern seaboard and especially the Nanjing and Guangzhou MRs contain the economic and industrial heartland of the country and are their most vulnerable areas. The US fields a formidable naval force in the Pacific. China will have to keep forces in this area which is crucial for its existence. A militarily resurgent Russia is across the border from the Beijing and Shenyang MRs. The Lanzhou MR has areas such as Xinjiang with issues of Islamic militancy amongst the ethnic population. The TAR also has a restive ethnic population. Thus the military has its share of external threats and internal dissent to contend with. The Chinese are aware that their Eastern seaboard cannot be threatened by India from land or sea except with land-based nuclear ballistic missiles of the Agni V class. India does not have a submarine-based IRBM capability as yet. However, the two MRs bordering India are within the reach of Indian aircraft and missiles. Indian Naval forces can deny the Arabian Sea and the Bay of Bengal to Chinese shipping.

India has to defend against a short duration conventional border conflict with limited objectives being launched by China. It will primarily be a PLA operation. The PLAAF will be tasked to secure the airspace over the area, defend the long lines of communication from interior China to the border against air interdiction and interfere with IAF’s air support to ground forces. The PLAAF could also threaten rear areas and population centres in India as well as hold out the threat of nuclear escalation in the tactical area. The threat of nuclear strikes on population and industrial targets by assets of the Second Artillery will also exist.

Indian ground forces are constrained by inadequate road links, lack of helicopter assets and most importantly, inadequate organic firepower. Numbers wise India will be at a disadvantage and the rate of induction of forces into the area cannot match that of the PLA. This will force the Indian Army to rely far more on air support for logistics, troop deployment and for firepower on the battlefield. India will have to use aircraft and helicopters in the close air support role but IAF does not have the numbers especially of helicopters and those that it has cannot be used at higher altitudes. Due to the proliferation of portable SAMs and to maintain acceptable levels of accuracy, aircraft should operate with stand-off PGMs that are in short supply. In view of India’s policy of not initiating hostilities, the option of pre-emptive strikes will not exist.

To use air power effectively, the IAF will have to achieve and maintain a favourable air situation in the area of operations. This is essential to provide effective fire support to ground forces and allow deployment of forces and equipment. Interdiction of lines of communication to the tactical area from the rear bases in order to isolate the forward forces of the opponent is a must as otherwise Indian ground forces will be overwhelmed by numbers. For this, suppression of SAMs and attacks on air bases will be a prerequisite. Locating and destroying ground based radars, AWACS and tanker aircraft will reduce the ability of the opponent to contest the IAF’s bid for a favourable air situation. Does India have the capability?

In such a situation, adversaries in the West will most probably create pressure. India cannot hope for any nation to do the same to China. India will thus face threat on two fronts. As of now, India does not have the capability to deal with this as force levels are too low and force multiplier assets such as AWACS, tankers and PGMs, too few. As for close air support, India does not have enough suitable weapons and even if a benign air environment is achieved to facilitate helicopter gunship operations, India does not have the helicopters available. In 1962 and in 1999, lack of information cost India heavily. Satellite and UAV-based reece in peacetime on a near continuous basis is essential to detect force build ups in time since India’s rate of induction of forces will be slower than that of the adversary.

In the medium term, India needs to create a functional Mountain Strike Corps, build up helicopter and artillery assets, acquire more AWACS and tanker aircraft, increase modern fighter assets, field UCAVs and improve road network. Fielding of an effective second strike deterrent including submarine-based missiles is imperative. India has to ensure that a border conflict does not become a viable option for China and will cost the PRC far more than gains expected.

4 thoughts on “PLAAF: Rising Challenge for the IAF”