Any General tasked to lead an expeditionary force to subjugate Afghanistan would not like to be reminded of the fate that befell the British in a similar attempt in the 19th century. Lady Elizabeth Butler’s iconic painting ‘Remnants of an Army’ depicting a half dead rider atop a struggling pony eloquently sums up the British experience. The man riding the pony was the sole survivor out of a contingent of some 4500 British troops and 12000 odd camp followers despatched by Lord Elphinston to bring the Afghans to heel. In more recent times Soviets tried it with their up-to-date weaponry.

A decade later, the empire was gone – the Afghan misadventure having contributed some final fatal blows. So history tells us that Afghanistan is not easily tamed. On the other hand as 9/11 brought home so stunningly, confluence of forces is such that Afghanistan cannot be ignored either. With an almost inexhaustible source of Jihadis incubating in the various Madrassas, and the spreading stain of Taliban control, Afghanistan could become a very deep black hole with the potential of sucking the whole world into unending chaos. So, despite the daunting prospects, and the likelihood of enormous costs in blood and treasure Afghanistan has to be rescued from going down the drain.

“¦some NATO countries may already be exploring bilateral arrangements with Iran. While big ifs undoubtedly remain in the US”“Iranian equation, given a favorable turn of events, the idea could well come alive sometimes in the foreseeable future.

Candidate Obama knew it and as President it now figures right on top of his ‘to do’ list. So as the drawdown in Iraq progresses, he plans to despatch an additional 17000 troops to Afghanistan to join the 38000 Americans already there. The hope is that an Iraq style surge would produce similar results in Afghanistan. Generals of course want more. Middle of last year, ISAF commander McNeill had indicated that instead of 60000 odd troops present in Afghanistan, NATO requires some 400000 to do the job1. Since then the situation, if anything, has got much worse. So relative to the situation, planned augmentation of forces may not be nearly enough for the mission. Even with this limited augmentation, a severe logistic challenge appears to be shaping up.

‘Geography’ they say shapes ‘history’. Perhaps nowhere is it more true than in Afghanistan. Afghanistan is a land locked mountainous country with no access to the sea. Pakistani port of Karachi is the sole funnel point for all sea borne cargo amounting to about 90 percent of all supplies destined for Afghanistan. From there the non- lethal cargo viz. food, fuel, and construction supplies, etc. is despatched via two established routes. The first route to Kandhar passes through the city of Quetta in Balochistan, winds its way to the border town of Chaman and then to Spin Boldak in Afghanistan. The second route through which nearly 75–80 percent supplies transit, leads to Peshawar in the North West Frontier Province (NWFP). From Peshawar supply convoys pass through the restive Federally Administered Tribal Areas (FATA) to the famous Khyber Pass towards Jalalabad and Kabul.

The only other significant operational logistic base and supply route is via the Central Asian Republic of Kyrgyzstan in the North. Post 9/11 attacks, US had leased a former Soviet Air base (Manas) just outside the Kyrgyz capital Bishkek. The base serves as a major staging post facilitating transit of some 15000 men and 500 tons of cargo every month. The base is also home to large fleets of tanker aircraft used for supporting missions in Afghanistan. 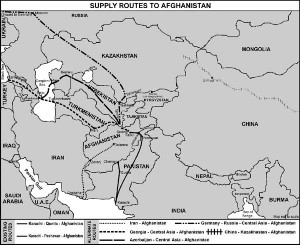 The Manas arrangement is about to unravel following the failure of negotiations over US payment of lease fees. The base may close down by the middle of 2009.

Depending on the rate of draw down in Iraq, US plans to deploy an additional 17000 troops in Afghanistan bringing the total strength up to 53,000. There are no officially published figures of the logistic backup required to sustain the current force level. However some informed guesses have been made.

Consider the requirement of fuel alone. Pakistan’s refining capacity can meet only half of its own requirements. Therefore, bulk of the fuel and petroleum products required for operations in Afghanistan is imported from the Gulf via Karachi. It is estimated that to meet requirements of augmented forces, some 650 to 700 additional fuel trucks will have to be put on the road. 500 to 600 more trained drivers willing to run the gauntlet in face of increasing insurgent attacks will also have to be recruited. Under normal circumstances, this may not appear like a big deal at all. But circumstances in Pakistan can hardly be called normal. The example merely serves to highlight the nature of challenges exacerbated by the insurgency in Pakistan

Reliance on just a couple of supply arteries coursing through militant and criminals infested territory naturally rendered them vulnerable and the Taliban were quick to take advantage. In March 08 a Taliban ambush destroyed 25 fuel tankers. In Nov ’08, a dozen trucks carrying ‘Humvees’ were hijacked at the Khyber Pass. Since then, supply convoys and depots in northwest Pakistan – even in Peshawar itself – have increasingly being targeted by the Afghan and Pakistani Taliban. In Feb this year militants forced closure of the road to Khyber by blowing up a 100 foot iron bridge 15 miles NW of Peshawar. The following day, a number of trucks returning from Afghanistan were torched.

Afghanistan is a land locked mountainous country with no access to the sea. Pakistani port of Karachi is the sole funnel point for all sea borne cargo amounting to about 90 percent of all supplies destined for Afghanistan.

While quantum of supplies lost to brigand activity may not be crippling in the overall context, the more serious consequence is the frightening away of contractors and drivers willing to undertake the hazardous ferrying missions. By early March this year, 130 contract drivers had been reportedly killed. In early 2008, 600 to 800 trucks used to wind their way every day from Karachi to Kabul through the Khyber Pass. Insurgent activity has brought them down to 300 to 400.

Need for finding alternatives has grown proportionately as Taliban attacks on convoys have intensified. While all neighbors of Afghanistan including Russia, China, Iran, the Central Asian Republics, and even Pakistan have a reason to worry about the consequences of state failure and thus unchecked explosion of Islamic militancy in Afghanistan, politics complicates the search for alternatives.

A cursory look at the map reveals the possible approaches to Afghanistan.

While some access routes appear farfetched at first sight, behind the scenes all options are being kept alive and hence none can be dismissed beyond the realm of possibility.

With intensification of Taliban activity, the Iran option obviously emerges in the spotlight. With completion of the Indian built strategic Zaranj–Delaram road, Iranian port at Chabahar becomes an attractive point of entry. There is an obvious convergence of US/Iranian interest in taming the Taliban and Al Qaeda, but for political reasons any US–Iranian co-operation has thus far remained a forbidden proposition.

However with President Obama’s conciliatory approach, and possible emergence of a more pragmatic leadership after the forthcoming Iranian elections, a dialogue may well get underway – particularly if some common ground could be found to the vexed issue of Iran’s nuclear programme. Indeed for both sides there are strong reasons to thaw the long frozen relationship. US needs an alternative to Karachi if it is to be in Afghanistan for the long haul. Iran needs to emerge out of its diplomatic isolation. For it to have the US or one of its allies depend on it, could become a major diplomatic asset.

In this regard there are signs that some NATO countries may already be exploring bilateral arrangements with Iran. While big ifs undoubtedly remain in the US–Iranian equation, given a favorable turn of events, the idea could well come alive sometimes in the foreseeable future.