Pashtuns Grievances Should be Addressed 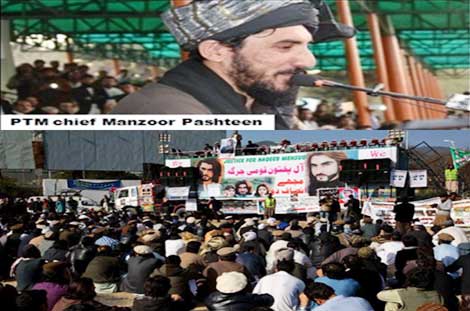 Pashtuns are an ethnic group of about 49 million people, split between two countries on either side of the Durand Line border was formed after the Second Anglo-Afghan War in 1880. The biggest share of them lives in Pakistan. They are referred with many names such as Afghan, Pashtun, Pathan and Pukhtoon. In Pakistan they are mostly inhabited in Khyber Pakhtunkhwa and Balochistan provinces along with tribal areas on the Afghanistan–Pakistan border.

The Pashtuns make up the second largest ethnic group in Pakistan numbering around more than 35 million which is 15-16% of the total population, in the country. But unfortunately, the Pashtuns have been associated with negative stereotypes, with the most common being the perception that they are war-loving barbaric people. Rather than as a dignified people who have paid in blood and money from years of terrorist violence and military sweeps. Pashtun areas are the poorest one in Pakistan its social indicators reflect 70 years of neglect. Militancy wrecked its infrastructure and traumatized its population.

The economy of the Khyber Pakhtunkhwa province (mostly inhabited by Pashtuns) is weak. What little industry exists is concentrated in the regional capital, Peshawar only. The economic, social and educational disparity between Pashtun areas and rest of the Pakistan is wide.

Moreover since 2001, Pakistani Pashtuns sufferings were further aggravated by the United States “War on Terror” when Pashtuns found themselves caught in the crossfire of the U.S. and Pakistan’s security forces battle against the al-Qaeda and the Taliban, bearing the brunt of military operations in the region and suffering racial profiling based on where they lived. Because of these reasons Pashtun feel alienated in Pakistan.

The rise of a nationalist and ethnic movement for the Pashtun population is the natural corollary of the humiliation and neglect they have had to suffer for decades. Hence the movement named Pashtun Tahafuz Movement (PTM) began in 2014. After a military campaign against the Taliban in the Waziristan tribal region witnessed the Pashtun areas in major turmoil. In 2018, protests against the extra-judicial killing of a 27 year old Pashtun, Naqeebullah Mehsud, in the southern port city of Karachi sparked countrywide support for the group.

The Pashtun movement has spread from the tribal areas to other parts of Pakistan including big cities. Another important aspect of this Pashtun movement is that it had gained the sympathy of mainstream Pakistani political parties, especially the Pashtun ones like the Awami National Party (ANP) and Pakhtunkhwa Milli Awami Party. It clearly indicates that Pashtuns across all party lines are lining up for common cause.

Prime Minister Imran Khan a Pashtun himself is trying his best to pacify Pashtuns and address their grievances. Like in January this year he approved a draft law criminalizing enforced disappearances which was a very good move and addressed long standing demand of Pashtuns. But he too is facing several bottlenecks.

PM Khan administration is facing challenges in convincing Pakistan’s three provinces to allocate 3 percent of their share in national resources to former FATA (Federally Administered Tribal Areas) a Pashtun majority tribal area. Argument given for seeking more fund’s allocation is that because of the destruction due to various military operations launched to eradicate terrorists in the former FATA which has been recently merged with Khyber Pakhtunkhwa more funds are required which KP cannot handle with its meagre development funds. But PM Khan is hardly able to convince anyone over this.

Apart from the lack of development funds other issues are also haunting like a year after FATA was merged into Pakistan’s administrative and legal mainstream, Islamabad’s promised reforms are moving at a snail’s pace. While Pakistani courts have struck down some discriminatory laws, the judiciary has yet to establish a foothold in the region. Courts established for the region’s more than 5 million inhabitants are now working outside their allocated districts. A police force capable of policing the region has yet to take shape.

As the Pashtun tribal areas faces severe underdevelopment and extreme poverty as it is estimated that 60% of total population lives below national poverty line. Hence for time being these areas should be given preference in resources allocation of the state. Special attention should be given towards sustainable employment opportunities through rehabilitation of small and medium enterprises (SMEs), investment mobilization, and institutional capacity building.

It would be unwise for Pakistan’s policy makers to perceive Pashtun resentment as a nationalist cause for separation from Pakistan and use force to curtail it. If coercive actions are taken against the already alienated Pashtuns it would invite a backlash and sow the seeds of enduring tension between the Pashtuns and the state. Definitely a disaster looms in Pakistan, if the demands of the Pashtun population remain unaddressed for long.