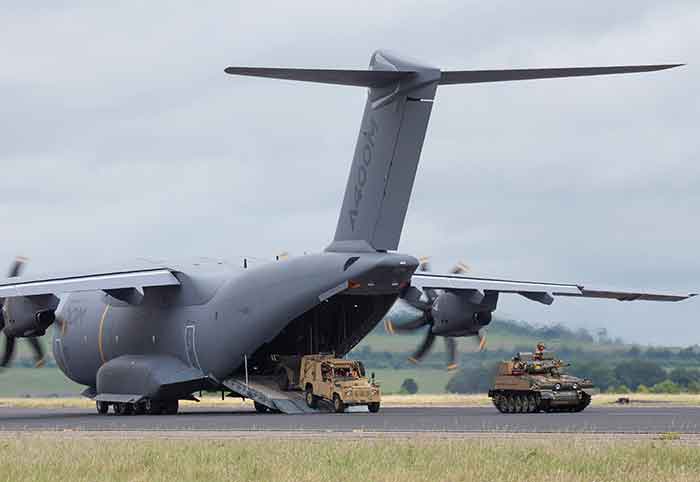 Airbus Military showcased its A400M Atlas strategic turboprop freighter at this year’s Paris Air Show. The first production example of the aircraft had been recently delivered to the French Air Force, its launch customer.

One pleasant surprise at the show was the epic daily flying display of Russia’s Sukhoi Su-35. Once again, Russian pilots demonstrated the impressive maneuverability of their aircraft, throwing it around the sky with abandon in front of an audience in disbelief that a flying machine would be capable of such feats.

The United Aircraft Corporation, the conglomerate which builds the Su-30, foresees a market size of up to 200 machines split equally between domestic and international orders.

Although traditionally the fast jets are the show-stoppers at air shows all over the world, Airbus’s A400M Atlas product freshly painted in its French Air Force colours treated visitors to daily flying displays. The French Air Force is the launch customer for the firm’s strategic turboprop airlifter. The numerous development problems of the aircraft now seem firmly in the past with the large plane demonstrating its neat agility. The force has already received one example of the airlifter and is expected to receive a second A400M by the end of the year. Meanwhile, at the aircraft’s assembly line in Seville, southern Spain, full-rate production is beginning to ramp up. Beyond France, the aircraft will be delivered to its other customers over the coming years notably Belgium, Germany, Luxembourg, Malaysia, Spain, Turkey and the United Kingdom. This will see a total of 174 airframes being delivered to these customers. However, it was clear at this year’s air show that Airbus has set its horizons on additional sales of the aircraft to new customers.

While freighters traditionally carry cargo and combat aircraft traditionally carry on the fighting, fixed-wing gunships represent a curious hybrid of these two domains. For several years, the main platform in use for the provision of devastating air-to-ground fire has been Lockheed Martin’s AC-130H/U Spectre/Spooky-II employed by the United States Air Force. Nevertheless Italian aircraft builder Alenia Aermacchi, in conjunction with ATK of the United States, is developing a gunship version of the C-27J Spartan turboprop airlifter. On static display during the show, the aircraft was shown with its palletized mission system. This includes a ATK GAU-23 30mm cannon and accompanying fire control system. This enables the mission system to outfit the aircraft when in use as a gunship, but allows it to be easily reconfigured as a freighter, effectively giving customers two platforms in one aircraft. Ground and air tests were recently completed at Eglin Air Force Base, Florida which included the firing of the GAU-23 cannon. Additional development of the so-called ‘MC-27’ gunship concept is now expected over the next year.

Beyond the fast jets and freighters, training aircraft were on display in the form of BAE Systems’ Hawk-T2. The company is promoting the jet trainer as a possible successor to the French Air Force’s Dassault/Dornier Alpha Jet-E aircraft which are used extensively for instruction and to equip the country’s Patrouille de France aerobatic display team. The Hawk-T2 has sold well with 28 equipping the Royal Air Force, and 22 outfitting the Royal Saudi Air Force. Other sales have been concluded with Oman (eight aircraft), and Poland is potentially in the market for the jets. 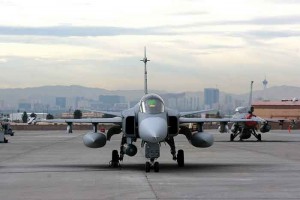 Saab provided an overview at the Paris Air Show regarding the latest, most advanced variant of its Gripen family of multirole combat aircraft, namely the Gripen-E. This aircraft will equip the air forces of Sweden and Switzerland.

While the Hawk-T2 could represent a suitable replacement for the Alpha Jet in French service, whether the traditionally good-natured Anglo-French rivalry will allow the Hawk-T2 to equip the Patrouille de France display team and overfly the Arc de Triomph on Bastille Day remains to be seen!

While the military mood of the Paris Air Show may have been arguably more ‘low key’ than in previous years, business was still being done and announcements were still being made. One has to wait and watch whether next year’s Farnborough Air Show in the United Kingdom is a similar, sober affair. Certainly, budget restrictions are not helping the situation in Europe and North America. Nevertheless Asia and Latin America are fertile markets for defence equipment, and perhaps a more robust military presence will be seen at the exhibitions on the horizon in these parts of the world? For the time being in Europe at least, tight budgets make for quiet air shows.