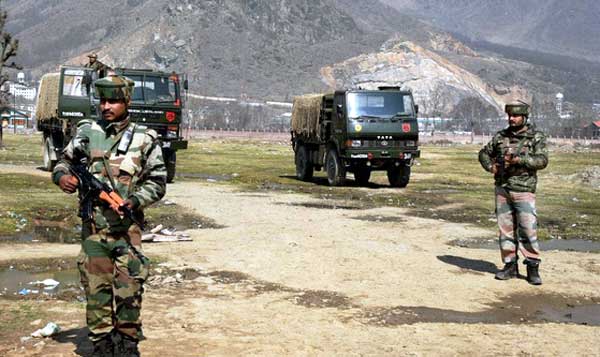 It was not long back when Army lost three of its elite special forces personnel including two officers and now CRPF (Central Reserve Police Force) have lost eight policemen in an ambush at Pampore. Both the attacks were launched on convoys and suggest that somewhere something is not right. Terrorists are targeting administrative convoys and routine administrative movements.

There are three questions that need answers, is it intelligence failure, is the SOP not being followed especially the ROP drills (Road Opening) and finally is there weakness in training / junior leadership?

There are three questions that need answers, is it intelligence failure, is the SOP (Standard Operating Procedures) not being followed especially the ROP drills (Road Opening) and finally is there weakness in training/ junior leadership? Failure of any of the above could lead to avoidable setbacks. There is a need to take a relook at the current model of CI/CT (Counter Insurgency/Counter Terrorism) grid in J&K.

J&K has a multitude of security forces each with its independent logistics chain resulting in uncontrolled and uncoordinated movements on a daily basis. There is no single agency that is exercising operational and administrative control over all the forces deployed in J&K, because Army and Rashtriya Rifles are under MOD (Ministry of Defence); CAPF (Central Armed Police Force) under MHA (Ministry of Home Affairs) and IRB (India Reserve Battalion), State Armed Police and Home Guards under state government. Multiple agencies operating in Kashmir Valley gives options to terrorists to strike at will. Almost every force is out on roads for administrative duties or for operational movement. With so many forces operating independent of each other is an ideal example how NOT to fight a proxy war/counter insurgency operations.

There is a unified command headed by State Chief Minister but this unified command has failed to nominate single overall force commander, as a result there is negligent absence of administrative or operational synergy on ground. Ideally there should be a single commander heading a Unified Headquarters and all agencies must work under that command structure. All forces should have integrated logistics thus avoiding multiple movements.

The normal tendency is that whenever there is any operation all security forces rush to the spot and most of them remain as spectator and add to the confusion. Fragmented approach is only helping the terrorists and not the state.Wars can’t be fought under collective leadership; it is a bad idea to pursue. Instead of achieving desirable success the current model of CI/CT adopted for J&K is most inefficient. CAPF leadership that controls the operations on ground is brought in from top with minimal experience at tactical level or even at a higher level.

Due to the turf war the IPS led CAPF do not even wish to train under Army or Rashtriya Rifles, the forces that has far greater experience with CI/CT operations.

Due to the turf war the IPS led CAPF do not even wish to train under Army or Rashtriya Rifles, the forces that has far greater experience with CI/CT operations. CAPF higher leadership is inept in leading from the front since they have no experience in marshaling troops in such situations. As a result success in operations is demanded from junior leaders without higher leadership able to create conditions for success.

US Army faced the predicament of mounting casualties, collateral damage (that antagonized the public at large) and CI/CT operations not going in right direction in Iraq and Afghanistan. Strategic thinkers and expert felt that there is a need to set the paradox of counterinsurgency operations right. Michael Schwartz, Professor of Sociology and Faculty Director College of Global Studies at Stony Brook Universityafter having carried out empirical study of major reversals at operational and tactical level in conflict zone came to the conclusion that:-

•   More You Protect Your Force, the Less Secure You Are. If the focus is to protect own force, the counterinsurgency force loses contact with the population. Success of CI force lies in engagement with the public than to isolate from the masses. Engagement with the public is reducing especially the youth. Objective of security forces should be to protect public and national interests rather than protection of self.

•   Tactical Success Guarantees Nothing. There is a need to understand that a tactical success is not a scale of victory in CI/CT operations. It does not even guarantee that no attack on security forces will take place in near future. Every successful operation by security forces makes insurgents or terrorist more skilled and forces them not to repeat the mistakes committed by their comrades. The focus on kill is irrelevant if counterinsurgency operations fail to modify the perception of the people.

More force you use more is collateral damage and more insurgents you create. Instead security forces should use less force in an innovative manner with higher degree of risk.

•   If a Tactic Works This Week, It Will Not Work Next Week; If It Works in one province, It Will Not Work in another. Counterinsurgency operations succeed only if the routine is broken, surprise is maintained and tactics is dynamic in nature. Anything that is not innovative or new will not yield result. In addition whatever is suitable for valley may not be suitable in Jammu Poonch area.

•   Use Less Force and Accept More Risk in Counterinsurgency Operations to Succeed. More force you use more is collateral damage and more insurgents you create. Instead security forces should use less force in an innovative manner with higher degree of risk. Chances of success are higher and casualties will be relatively less. It will keep terrorists on the run and give an impression of security forces being omni-present.

General Raj Shukla said that the concept of “Shape, clear, hold and consolidate” is the model Indian Army has practiced for more than six decades in North East and J&K. Raj further states that Indian Army is the only Army in the world that practices “Doctrine of Restrain” and it has a desired impact on success of counter insurgency operations. Whereas the other nations are very keenly studying the Indian Models but there is reluctance on the part of CAPF to adopt these strategies and tactical nuances. The Unified Command is the only way ahead but the turf war between MOD and MHA primarily between bureaucracy is harming the larger national interests. Praveen Swami in his tweet highlighted a very significant fact that, “India is the only country where lessons on a lethal ambush will be drawn by bureaucrats (IAS officers) with zero domain competence”. Whereas world over the practice is that views and opinions are solicited from domain experts.

US Army continuously engaged with the domain expert’s world over while operating in Afghanistan and Iraq. US Army delegations interacted with Indian Army on regular basis to iron out the concept of operations of fighting terrorism and insurgency in Afghanistan. They studied Indian model of people friendly operations to great extent and the concept of “Shape, Clear, Hold and consolidate” has emerged out of Indian experience. Anthony Cordesman formalized this concept in his paper “Shape, Clear, Hold, and Build: The Uncertain Lessons of the Afghan & Iraq Wars”. Not that US was successful in achieving decisive victory but managed to contain insurgency and terrorism for Afghan government to function. But all agencies operating on ground must introspect and rethink their strategy to avoid such tactical reversals.

Time has come to take a hard look at the command structure of CI/CT in J&K. Accountability for avoidable casualties needs to be fixed and failure of intelligence should be dealt severely.

Tactical reversal gives a sense of winning to terrorists, because they see victory in number of body bags they send home. Success against terrorists is elimination of terrorists without collateral damage. William F Owen says, that, “if a force is skilled in fighting counter insurgency operations, then killing insurgents does not place the population at risk, and chances of success are more than any other action”.

Time has come to take a hard look at the command structure of CI/CT in J&K. Accountability for avoidable casualties needs to be fixed and failure of intelligence should be dealt severely. Generic information has no value in CI/CT since it is available at bus stops and tea shops. Intelligence agencies must be made to work hard to gain actionable intelligence. Success of operations is directly dependent on quality of precise intelligence. Indian intelligence agencies are yet to execute operations across LC (Line of Control) to eliminate terrorists in their launch pads or before they infiltrate into Indian Territory.

Responsibility of counterinsurgency or counter terrorism should be ideally given to the Army Commander Northern Command with further delegation to the Corps Commanders at Srinagar and Nagrota . Integrated logistics, coordinated operations and intelligence sharing on minute to minute basis is vital.Intelligence agencies should be accountable to the commanders on ground instead of bosses in Delhi. Conflict in J&K should be handled by one ministry instead of two separate ministries handling J&K. Because both the ministries have different outlook towards the problem of J&K. Delay in restructuring the CI/CT grid will push J&K into bigger turmoil and if current model remains unchanged Palestinisation of Kashmir is not far.