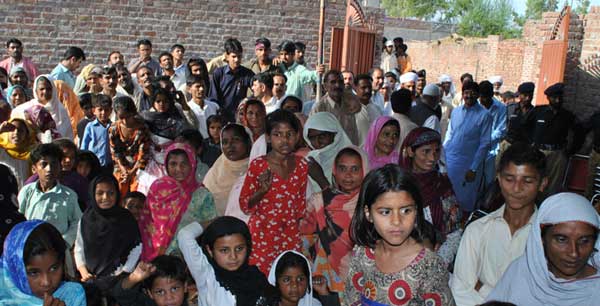 ‘Demography is destiny’. Like geography, it influences politics, economics and issues of war and peace. Though demography (population numbers, composition and density) is not permanent and certainly changes, yet the rate of change is slow and there is certain inevitability about its effect. Pakistan is a classic case where the demography of the country in combination with its geography makes a combustible mixture that has a potential to blow up the region in mid-term future.

…in less than a decades time, Pakistan’s  projected population is expected to touch 210 million.

So how many Pakistanis are there? The true answer will be only be known in July after the result of the current census are out. It is the first census being carried out in Pakistan after 19 years. As per the last census carried out in Pakistan in 1998 its population was 130 million. The next census was due in 2008 but was never carried out due to opposition from various quarters. Even the present census is being undertaken with the help of Pakistani army. Nearly 200,000 soldiers have been deployed for this task.

Census figures are crucial for it since the distribution of resources as well as seats in the federal parliament will be decided based on the numbers. Provinces other than Punjab accuse the dominant province of over counting itself and undercounting the rest, particularly Sindh. Then there is the problem of large number of Afghan refugees settled in Baluchistan and Karachi. The Baluchis fear that the census will show that they have become minority in their own province. One should expect great internal turbulence once the results of the current census are out. Irrespective of the internal effect the population explosion on India’s doorstep bodes ill for the region. The demand for ‘Lebensraum’ in the East (India) is waiting to happen.

Various agencies of the United Nations have been monitoring the population of Pakistan based on sample surveys. Some of the findings are that by 2025, in less than a decades time, Pakistan’s  projected population is expected to touch 210 million. Already, over 40 percent of the population live officially under the poverty line. This comes to almost 7.2 crore abjectly poor and desperate individuals.

Pakistan has no serious population control programme. The UN statistics also shows that the per woman fertility in Pakistan is 5.2 children.

Add to this the fact that over 65 percent of the  population is under 25 with barely 16 percent being literate. The explosive impact of the simmering rage of the young and the disfranchised human bomb becomes fairly clear. Add another 30 million (we’re talking minimum projections here) to this boiling cauldron of social discontent over the next decade and the consequences should not be difficult to fathom. No wonder agitating mobs are getting bigger and bigger in size and turning more violent? There are simply too many, too angry at being squeezed into a suffocating socio-economic environment, and too young to fear anyone in taking down any system that does not deliver change.

Pakistan has no serious population control programme. The UN statistics also shows that the per woman fertility in Pakistan is 5.2 children. This is in a sense misleading since the middle class is not part of it. Thus the really poor and the illiterate are the ones who are adding more than 6 children to the pool of poverty stricken multitude. At this rate of growth of population Pakistan in a decade will become world’s third most populous country after India and China, overtaking the US.

With a meagre fertile landmass, no minerals, rudimentary industry, Pakistan is destined to implode. Far from developing, Pakistan may also not be able to exist in its present physical form unless it makes a serious commitment towards population control. Pakistan is unable to provide resources to its present population let alone cater for the coming human waves. Whatever development plans are made by whoever are laid asunder by population.

“Jihad” is not merely a religious concept in Pakistan but an avenue of employment. To keep the fires of Jihad burning is thus a political necessity.

Historically, Europe also saw this kind of population growth in the 16th and 17th century. But those were the days of fluid national boundaries and colonialism. The European hordes decimated the populations of America and Australia and usurped the resources of Africa to get over this crisis. This luxury is not available in the 21st century. In some ways similar situation exists in India as well. Our northern states have similarly high human fertility rates. But the South and West of India, that has reached demographic stability, provides an outlet for the surplus population of the North. The North to South labour movement has been noted in the Indian census reports. For some years, Gulf oil boom provided a similar outlet for the Pakistani population. But with dramatic fall in oil prices, the Gulf boom is over.

The restive population of Pakistan is being kept under control by the ruling elites with the help of religious mobilisation. “Jihad” is not merely a religious concept in Pakistan but an avenue of employment. To keep the fires of Jihad burning is thus a political necessity. Permanent state of enmity with India is thus necessary precondition for keeping the country together and also keep resources flowing to the military. As India progresses and takes an increasingly hard line approach to Pakistani hostility, the young and restless population of Pakistan, sooner than later will demand ‘Gazwa e Hind’ (conquest of India). A beleaguered Pakistani government and the military will then be forced to adopt the path of a military adventure.

The Pakistani womb bomb is deadlier than its nuclear bomb and its chain reaction is un-stoppable. India would do well to take into account the challenge posed by demographic implosion in Pakistan that has the potential to nuclear explosions in the subcontinent.

4 thoughts on “Pakistan’s Womb Bomb: Deadlier than its Nuclear Bomb”