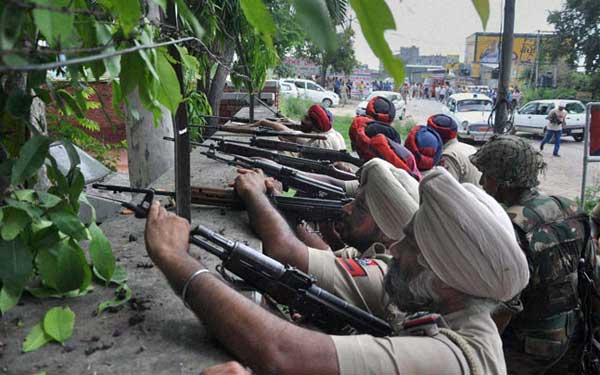 Yet again the Pakistani terrorists struck at dawn on July, 27 this time in Gurdaspur. They were eliminated in a twelve hours long gunfight which left eight persons dead including a Superintendent of Police and four brave policemen of the Punjab Police.

It was an audacious attack on the Police Station at Dinanagar, this was the first of it kinds spilling over in to Punjab. The modus operandi was however similar to the previous such attacks. Like the ones witnessed in the Jammu belt stretching from Kathua to Akhnoor in the troubled state of Jammu and Kashmir.

The nexus between the ISI and the active drug cartel in Punjab also appears to be a new channel facilitating the transport of terror.

Just before dawn on Monday, a group of four infiltrators hijacked a white Maruti car, firing at people at the bus stand and a road side eatery before storming a police station. The pattern leaves us in no doubt that these terrorists were from the Lashkar-e-Toiba (LeT).

There are different views articulated by various security experts on the question, why Punjab? They range from suggesting a revival of Khalistani movement to enlarging the Kashmiri envelop in an effort to tie-down security machinery in this strategically important rim state.

There are also those who suggest that Pakistan finds the Punjab border relatively easy to infiltrate when compared to the highly militarised one of Jammu and Kashmir. The nexus between the ISI and the active drug cartel in Punjab also appears to be a new channel facilitating the transport of terror.

Whatever may be the case, but the fact remains that Pakistan has not altered her course thus ridiculing the efforts of India’s Prime Minister to reconcile and improve relations. The gesture of calling over Nawaz Sharif to India for Swearing in ceremony or Ufa joint statement, all seems to have eroded away by this belligerent act of the ISI and the LeT.

But the planning, logistics and execution of planting the bombs would take a few days. This amounts to a serious intelligence failure greater than the undetected infiltration itself.

At the operational level it is ironic why the highly trained National Security Guards (NSG) or the Army Special Forces teams not employed. As per the sources the NSG team was carrying out a training exercise nearby at Amritsar airport not far away from the scene of this terror strike.

Probably the number of fatal casualties could have reduced had this highly skilled national resource been employed. Was this due to lack of centre state coordination or the ego of the turf, something that needs to be questioned?

What should send the alarm bells ringing within the intelligence circuit? It is the fact that this terror strike intended to inflict a far greater human cost by blowing up a railway track.

While infiltrating through the international boundary and striking a police station within 15 km may be an exercise stretching from the last light to the sunrise the next day. But the planning, logistics and execution of planting the bombs would take a few days. This amounts to a serious intelligence failure greater than the undetected infiltration itself.

The brave action by the police men needs to be lauded and commended. Nevertheless the visuals of the action beaming across on the television sets seem to suggest that the brave hearts fought ill equipped.

None were seen wearing protective body gears or carrying the communication equipment thus reflecting upon the poor state of affairs.

Having dealt with these type of terrorist strikes for decades, India will have to take a serious call in calling the Pakistani nuclear bluff.

A protective curtain behind which the devil continues to bleed the dame needs to be pull down.