Pakistan's offensive against the Taliban 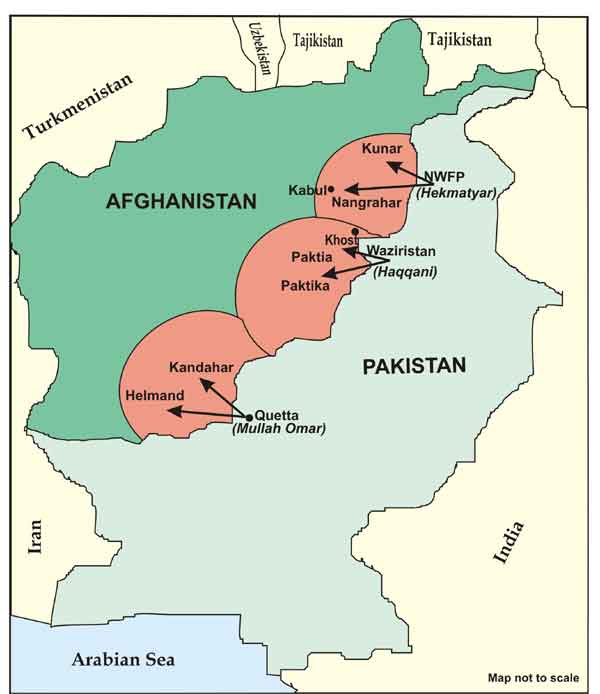 The Pakistan Army itself hardly fights. Instead, it directs others to do its bidding! The Pakistani generals consider the Taliban and other terrorist groups as the vanguard of the nation’s defense and their “strategic assets”.

It is now nearly two months since the Pakistan military suddenly changed its stance in dealing with a resurgent Taliban and launched military operations against a much strengthened and assertive Taliban. The military operations launched by Pakistan have no doubt stopped the overt spread of the Taliban to other areas of Pakistan. However, the series of bomb blasts and suicide terrorist strikes commencing in Lahore on 27 May, with the latest on 14 June at Dera Ismail Khan, indicate the capacity and resolve of the Taliban not to get intimidated, but to strike back.

The Pakistan Army itself hardly fights. Instead, it directs others to do its bidding! The Pakistani generals consider the Taliban and other terrorist groups as the vanguard of the nations defense and their “strategic assets”.

There is no doubt that the earlier appeasement of the Taliban by the Pakistani authorities, over a period of four years of the ‘on-again/off-again’ truces, did result in the Taliban becoming stronger. The Pakistan Army was reluctant to operate against them, for many reasons, the foremost being its usefulness, according to Pakistani thinking, as assets to fight the Indian military.

This convoluted logic has resulted in the steady strengthening of the Taliban as well as other terrorists. It was only on being arm-twisted and the promises of lucre by the United States that the Pakistan Army commenced operations against the Taliban in the area of Swat. They have reportedly contained the spread of adverse influence to the Pakistani polity. However, if history is an indicator, the Pakistani military is unlikely to carry on with such operations over an extended period of time, or to extend these operations further west, nearer the Afghanistan border, which is the safe haven for both the Taliban and the Al-Qaeda.

For nearly a decade, the Pakistani military has successfully followed the policy of appearing to fight terrorists and covertly supporting and nurturing the same terrorists. In this respect, the United States has been quite obviously naïve in its approach to dealing with Pakistan, thinking that it would be able to get Islamabad’s unstinted support by inducements like making it a non-NATO ally; doling out billions of dollars (more than $12.3 billion since 9/11, with additional $ 1.5 billion per year for the next five years); a steady arms supply; overlooking its nuclear proliferation activities; making light of the genuine concerns voiced by India; and ignoring its anti-US activities. Resultantly, the much-trumpeted war on terrorism in the badlands bordering Afghanistan and Pakistan petered out and the terrorists of the Taliban, Al-Qaeda and other varieties flourished and gained strength steadily.

We need to fully understand the ground situation before we venture to analyse its repercussions on India and what we should do to ensure that we do not get singed by the flames that are currently enveloping the western parts of Pakistan.

Leaving aside Pakistan Occupied Kashmir (PoK), which includes the so-called Northern Areas, Pakistan has been administratively divided into four provinces, viz. Punjab, Sindh, Baluchistan and North West Frontier Province (NWFP). In addition, it has FATA (The Federally Administered Tribal Areas), which is a geographically separate area governed through “political agents”. Only tribal laws are applicable in FATA. The only non-tribal law applicable to residents of FATA is the Frontier Crimes Regulations, a colonial-era edict sanctioning collective punishment for tribes and sub-tribes guilty of disrupting the peace. 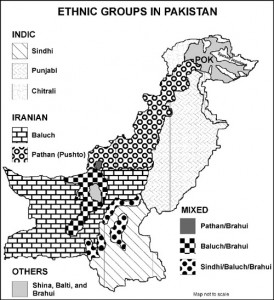 Within FATA, there are seven near autonomous “agencies”. These are the Bajaur, Mohmand, Khyber, Orakzai, Kurram, North Waziristan and South Waziristan. All residents of FATA and the vast majority of those in NWFP are ethnically Pakhtuns. There are also a large number of Pakhtuns in Baluchistan. In the Pakhtun minds, their “nation” encompasses wherever Pakhtuns may live, irrespective of the formal border –  the Durand Line!

The ethnic groups in Pakistan are highlighted in Map.

Taliban and Other Terrorist Groups

The Taliban was created by the Pakistani Army and its dirty-tricks department, the infamous ISI, in the 1980s when the Soviets had occupied Afghanistan. The creation of the Taliban was a joint effort of the United States (funds and weapons); Saudi Arabia (funds and religious motivation); China (political support, funds and some weapons); the Mullahs in Pakistan  (indoctrinated manpower); and the Pakistan Army and the ISI (leadership, motivation, planning and training). This joint effort did succeed in forcing the Soviets to leave Afghanistan, but the monster created for those short-term gains continues to haunt the same players who had jointly created it.

There are broadly three types of terrorists operating in the tribal areas of Pakistan. These are Al-Qaeda, Taliban and the Lashkars. After the Afghanistan operation of 2001–02, many Taliban and Al-Qaeda fighters escaped into FATA, where the local tribes sheltered them. They started crossing the border to fight the US military in Afghanistan, with the tacit approval of the Pakistan Army. The Al-Qaeda groups that had entrenched themselves in FATA influenced a new Taliban mindset that was far more aggressive towards the Pakistani military and disruptive towards the local, tribal traditions. This resulted in the emergence of the so-called “bad” and “good” Taliban.

Should the Taliban presence become even partially effective in Punjab and Sindh, it would lead to a human exodus in the millions. As a counter, India needs to initiate action at many levels.

The most prominent Taliban leader, Baitullah Mehsud is the nominal chief of the “Tehrik-e-Taliban Pakistan” (TTP). Maulvi Nazir is his rival in South Waziristan. Nazir is a darling of Pakistan’s military establishment as he is only interested in fighting the US, Afghan, and NATO forces in Afghanistan. The Pakistani Army considers his group as the “good” Taliban versus Baitullah Mehsud and his TTP, who are the “bad” Taliban!

The TTP, which was seen till recently as merely a collection of young suicide bombers with limited capability for territorial control and dominance, started demonstrating that it had evolved into a conventional army, which could fight, occupy and administer territory. Its objective of fighting for the defeat of the US-led NATO forces in Afghanistan was supplemented by its independent agenda of expanding its territorial and ideological dominance to other areas of the Pakhtun belt in the NWFP initially and then to non-Pakhtun areas.

Lashkars (literally irregular tribal militias) are permanent fixtures in Pakistan. Among the prominent ones, Lashkar-e-Taiba (LeT) is committed to fighting India, in and out of Kashmir; Lashkar-e-Janghvi is bent on killing Shiites, and Jaish-e-Mohammed (JeM) is ready to attack anyone!

One thought on “Pakistan’s offensive against the Taliban”