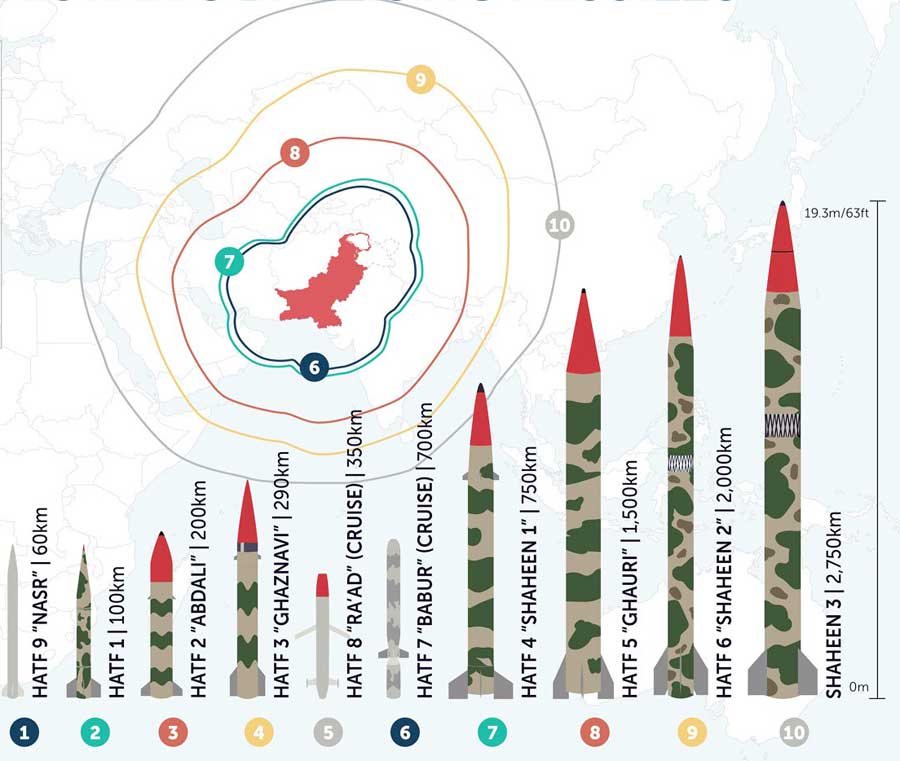 Since the Partition of Indian sub-continent in 1947, India and Pakistan have witnessed deep animosity and hatred for each other. India, after overcoming the pangs of Partition, moved on to become a self-reliant and contended but Pakistan felt short-changed by denial of Kashmir. Losses in four wars with India has compelled Pakistan to re-evaluate its defence strategy. It has adopted Nuclear weapons and use of terrorism as a State policy, against India.

India tested its first nuclear device in 1974. There after it was only in 1998 that it conducted five hot tests. In retaliation, Pakistan too went for hot tests, confirming to the world that it had evolved as a nuclear power.

Pakistan’s nuclear program started after Soviet invasion of Afghanistan. China helped Pakistan with a view to arm it against two of its inimical neighbours, namely USSR and India. India’s nuclear program and strategy is aimed at countering both China and Pakistan, A comprehensive paper on nuclearization of South Asia has to factor in Sino – India, Sino – Pakistan as it pertains to India and Indo – Pak dimensions. These dimensions have not been considered in this paper but only briefly touched upon, as relevant.

India’s nuclear program is primarily for generation of power, developing breeding technologies and using nuclear applications in wide range of civil application. It is civilian intensive in its development and in application. The nuclear weapons are relatively very small part of it.

In contrast, the Pakistani program is focussed primarily on development of weapons though power generation does form a small part.

Further, India is a vast nation, about four times bigger than Pakistan, with vast resources and has a GDP of 2.8 trillion compared to 284.2 billion dollars of Pakistan. India has the fourth largest conventional armed forces vis-à-vis the 15th ranked Pakistan. India, on its military and economic strength, doesn’t unduly worry it about Pakistan and also China. This doesn’t dictate an urgent need to develop and expandits nuclear weapons. Pakistan, on the other hand is paranoid of its powerful eastern neighbour, which has manifested in rapid development of its nuclear arsenal.

India’s approach to nuclear weapons is fundamentally conventional. It views nuclear weapon as a political tool to prevent blackmail or its use by an adversary. It considers it as an instrument of “dissuasion”. Therefore, it has concentrated on developing a second strike or a retaliatory capability. Though in possession of a large amount of both weapons and reactor grade plutonium, it hasn’t built a weapons stockpile that it can.

In contrast, Pakistan views nuclear weapons as means to negate the conventional and nuclear threat from India. In application, it envisages use at tactical and operational levels, to threaten escalation to a strategic level, to force termination of an ongoing conventional war.

They also view their nuclear strength as an insurance against Indian retaliation against them, in their ongoing proxy war in Kashmir. It also acts as an instrument to mobilise the international community to restrain India from escalating further, in case Pakistan finds India impinging on its threshold level. This has resulted in Pakistan to rapidly develop a large and a diverse stockpile of nuclear weapons.

A complete view of Pakistan’s nuclear strength dictates an in-depth analysis of its fissile materials production; nuclear weapons research and development and production; delivery systems and its deployment; its command, control and communications and intelligence, surveillance and reconnaissance (C3ISR) capabilities. It requires an analysis of the availability of its strategic defences and the characteristics of the nuclear force posture, to include the integration of nuclear weapons with other military capabilities.

However due to the opacity of its nuclear program, this study relies on open sources and to that extent, restricted in its depth.

Similar to India, Pakistan too produces its own fissile material for its nuclear armaments. India relies on pressurized heavy water reactors utilizing natural uranium as fuel, to produce weapons-usable plutonium as a by-product.

In contrast, Pakistan, like China, concurrently relies on both uranium enrichment and plutonium pathway to nuclear weaponization. It produces High Enriched Uranium (HEU) at the Kahuta uranium enrichment plant started by Dr AQ Khan in late 1970s, which is now complemented by another plant at Gadwal.

In late 1980s, Pakistan embarked on the Plutonium pathway too. Weapons grade (WG) plutonium is used to build compact nuclear weapons and to enhance the yield of the present weapons stock. The four Khushab series Chinese aided reactors are all 50 MW plutonium production reactors, using natural uranium as fuel, moderated by heavy water. Assuming regular availability of natural uranium, Pakistan should be able to produce 25-50 kg of plutonium annually.

It takes around 15 kgs of HEU to build an implosion device. Therefore, Pakistan may be having 200-250 nuclear weapons based on HEU. If 20kgs HEU is used, then it may be in possession of 150-190 HEU based weapons.

In plutonium-based weapons, a four kg Plutonium 239 is sufficient to attain critical mass. With a stockpile of approximately 280 kgs of weapons grade plutonium in 2018, it can be assumed that Pakistan has 70-75 nuclear weapons based on Plutonium 239.This calculation verifies international claim that Pakistan has more nuclear weapons than India’s 210-220.

By 2025,it’s expected to add 150-190 HEU based weapons and another 30, Plutonium 239 based nuclear weapons, taking the total tally to 400-480.These are notional numbers as its extremely difficult to penetrate the veil of opacity.

Pakistan is pursuing both boosted – fission and thermonuclear technologies and it can be safe to assume that Pakistan has today in its inventory not only 12-15 KT weapons but ones with larger yields.

By choosing two pathways to build the fissile material stockpile, Pakistan has demonstrated its urgency in factoring nuclear warfare against India as a bulwark of its strategic plans and also to stock up adequately, before the Fissile Material Control Treaty becomes a reality.

Each nation slows down or terminates new acquisition of nuclear weapons once it reaches its levels of “strategic sufficiency”. In March 2005, President Parvez Musharraf, had stated that Pakistan has crossed its “minimum deterrence” threshold.

This has not prevented further addition to the nuclear arsenal or slowed its fissile material production. This may be due to the Pakistan’s fear of the growing economic and military might of India, its acquisition of Ballistic Missile Defence system, the completion of India’s Nuclear “triad” and its ability to increase the production of fissile materials significantly, if it so desired. It also perceives United States as a threat, especially after inking of the US – India civilian nuclear deal and US raid at Abbottabad that killed Osama Bin Laden.

In Delivery systems too, Pakistan’s continuing expansion and diversification. Pakistan wants to achieve parity with India by completing its nuclear triad, though this is still a very long way off.

The first delivery system developed was aircraft delivered gravity bombs. After acquisition of the ballistic missile technology, it was expected that nuclear armed ballistic missiles will replace aircraft delivered bombs. However, Pakistan Air Force has not only held on firm to this option but also upgraded to air launched cruise missiles (ALCM) such as “Raad” and short-range glide bombs, keeping the strike aircrafts relevant for nuclear missions. Two squadron of F 16 and one squadron of Mirage V/JF-17 are its options but most likely in the second wave of nuclear strike, after the nuclear armed missiles strike or the first wave of stand-off attacks with cruise missiles.

With mastery of missile technology, the trend for delivering nuclear weapons have shifted to “Land based missile systems”. Pakistan’s worthwhile nuclear deterrent has emerged only after it manifested itself in land-based missiles. It is now the main component of Pakistan’s nuclear force and is controlled Army Strategic Forces Command (ASFC) under the all-important Pakistan Army. Ghaznavi missile system (the original Chinese M-11 SRBM), Ghauri (the North Korean No Dong), indigenously developed Shaheen II and III, Abadeel MRBMs form the backbone of the nuclear delivery systems. Its supplemented by nuclear tipped multiple launched rocket launchers systems Nasr and ground launched cruise missile (GLCM) Babur. As sourced from web, Pakistan’s nuclear delivery system is composed as given in the table below:-

Pakistan has laid emphasis on development of mobile solid fuel missiles with longer ranges to target the vastness of India and its island territories. Ghazni is the only liquid fuelled missile.

To support battlefield operations, it has developed a wide range tactical nuclear weapons like Nasr and nuclear tipped cruise missiles for deployment along the sea coast, on surface vessels and conventional submarines. Pakistan is developing/ has in its inventory short range low yield weapons such as nuclear torpedoes, depth charges and land mines. These tactical and small systems maybe used strategically too, through discrete targeting, intended for political goals.