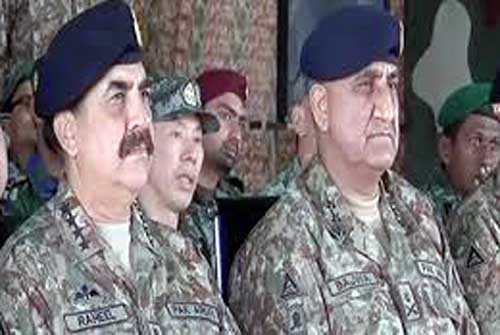 Pakistan has mastered the art of symbolism; of letting its actions do all the talking. As the country prepares for a change of Army Chiefs today (November, 29) two terror attacks in the Jammu region have sent out a clear signal that there is no change in its policy towards India.

The twin terrors attacks in the Jammu region and instances of cross border engagement with the BSF are ground indicators of the business and usual policy that Pakistan will follow so far as India is concerned after Gen. Sharif gets superannuated.

In the last few days after declaration of Lt. Gen. Qamar Javed Bajwa as Army Chief designate, the Indian media has been going overboard in its breathless coverage to the changeover.

The crux of the opinion that has been put forward is that Gen. Bajwa is a mature professional soldier, a votary for democracy and more interested in containing the internal security situation of his country which is in doldrums.

It is also being said that Gen. Raheel Sharif was the villain of the piece so far as the teetering Indo-Pakistan relations are concerned. The spike in terrorist activity, cross border fire, infiltration bids etc. were all due to the personal agenda of Gen. Sharif with the Government of Pakistan and Prime Minister Nawaz Sharif standing by as mute spectators. An indication was being given that things are likely to change for the better with the new Army Chief coming in.

Such a thought process was bound to raise the hackles of the Pakistani establishment/deep state. The result is there for all to see.

Even as preparations are on for the elaborate ceremony that is held in Pakistan when the Chiefs baton changes hands, the defence Minister of Pakistan Khawaja Asif has gone on record to say that the focus of the country will remain on its eastern Border with India. “The military policy will continue and there will be no immediate change in it (under Bajwa),“Asif is reported to have said in a conversation with geo news as reported in the, November, 29, issue of Hindustan Times.

The twin terrors attacks in the Jammu region and instances of cross border engagement with the Border Security Force (BSF) are ground indicators of the business and usual policy that Pakistan will follow so far as India is concerned after Gen. Sharif gets superannuated.

…the attack was carried out by a sleeper cell that has been in the vicinity of the target for quite some time since it would be difficult for a newly infiltrated group to reach Nagrota, which is a good distance from the International border.

The situation merits a rethink on whether Prime Minister Nawaz Sharif was a lame duck in the face of anti-India belligerence of his Army Chief or was it a clever ploy to continue with a abrasive and violent policy toward India while keep international pressure at bay.

Under these circumstances there would be a need to establish the Government of Pakistan and its political leadership as a part of the “establishment and deep state” and not out of it.

It seems that Prime Minister Sharif would be having a good laugh at having successfully created a smoke screen to carry on with a consensual policy for dealing with India in which his government is as complicit as the Army and the militant organisations.

The exact modus operandi of the terrorist involved in the strike will be known in the next few days.  It can, however, be surmised that the attack was carried out by a sleeper cell that has been in the vicinity of the target for quite some time since it would be difficult for a newly infiltrated group to reach Nagrota, which is a good distance from the International border.

It becomes apparent thereby that the establishment in Pakistan has given a deep thought to the timing and the intensity of the attacks and there lies an indication of the planning that goes on behind such incidents which the Government of Pakistan wishes to pass off as the handiwork of local elements.  It is not by chance that things fall in place with such precision.

Indian, in fact, can look for a spike in violence in the Kashmir Valley and also more tension along the border while Gen. Bajwa goes through his paces.

The new Army Chief of Pakistan also has to demonstrate to his troops and his accomplices in the militant groups that he is made of as strong stuff as his predecessor. Getting the crown is only a small percentage of the job done; retaining it is the bigger challenge. Considering the high level of fundamentalism that has seeped into the Pakistan Army, he has no option but to toe the line so as to ensure his own survival.

This twin strike could not have taken place without putting the Chief designate Gen. Bajwa in the loop. It therefore can be taken for granted that he has given his approval and set the ball rolling by taking this first policy decision of his tenure.

Indian, in fact, can look for a spike in violence in the Kashmir Valley and also more tension along the border while Gen. Bajwa goes through his paces.

It also needs to be kept in mind that Gen. Zia-ul-Haq was also a subservient protégé of Zulfikar Ali Bhutto till he showed his true colours by deposing and killing his erstwhile master to whom he had vowed undying allegiance and loyalty and taking over the reins of the country for a decade.

It is best not to try to foretell what would happen in a country like Pakistan and get into a state of complacency. The best option would be to remain prepared for the worst which, in any case, has a higher degree of probability.

In case the Government of India is harbouring any desire to reach out to Pakistan and Nawaz Sharif in view of the changed circumstances it should take the hint and put such sentiments on the back burner. Status quo in the India Pakistan relations has been re-established.