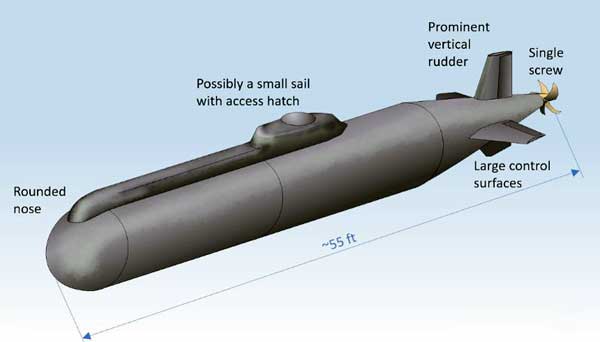 An article that appeared last month in foreign media talked of a new mystery submarine in Pakistan which presumably meant for marines of the Special Services Group – SSG (N). Spotted on the quayside of Pakistan’s naval base in Karachi (PNS ‘Iqbal’), the submarine is assumed to be some 55 feet long by 7-8 feet across – much smaller than a regular submarine.  Yearbook 2015-2016 of Pakistan’s Defence Production Division (MoDP) had listed the “Indigenous design and construction of one Midget Submarine” as a target for 2016-2017.

In 1965, Pakistan had awarded a contract to the Italian shipbuilding firm ‘Cos.Mo.S’ to design a SX-404-class midget submarine for Pakistan Navy, to be used as a Diver Propulsion Vehicle for launching marines. The SX-404 was  the smallest submarines class then but could carry 12 personnel for special tasks and reconnaissance in shallow water. There were teething problems in torpedo specified by Pakistani Navy not matching with the SX-404 and compatibility with the mother submarine that would deliver the midget submarines. These were eventually delivered in 1971. During 1972-1973, Pakistan Navy bought six more SX-404-class submarine from Italy. One of these was lost in an accident and two were decommissioned in 1982-1983. The SX-404-class submarine program was phased out in early 1990s.

Since then the SSG (N) has been operating three types of MG-110 submarines built locally in period 1993-1996 which are due for replacement. The Italian firm Cos.MO.S that designed these midget submarines has shut down but Italian submarine manufacture Drass has continued with these designs. However, the mystery submarine sighted at Karachi was even smaller than the midget submarine DG-85 produced by Drass.

China revealed its new midget submarine design ‘MS200’ at Thailand’s Defense & Security 2017 exhibition held at Bangkok. This 200 ton single-hull submarine greatly differs from previous Chinese midget submarine designs. Speculation is that the MS200 is meant exclusively for export to countries like Pakistan. The MS200 is 30m long, carries 6 + 8 PAX, has an operating range of 1500nm, endurance of 15 days and carries 2 x 53mm torpedoes. At the same exhibition, China also displayed models of two more new midget submarines, MS600 and MS1100, both larger than the MS200. Both have endurance of 20 days can carry 15 personnel and more number of 53mm torpedoes.

In 2015, Pakistan approved purchase of eight Hangor (Type 042 Yuan-class) submarines with a provision to construct four at Karachi Shipyard and Transfer of Technology (ToT) from China. In 2016, Pakistan awarded the contract to Turkey-based firm STM for modernizing its Agosta 90B submarines. The Type 042 and Agosta 90B are not midget submarines but Turkish firms STM (Savunma Teknolojileri Mühendislik ve Ticaret A.Ş.) were reportedly jointly developing a midget submarine with Pakistan. It is possible that either this new mystery midget submarine has either been purchased by Pakistan from Turley or produced locally in Pakistan under ToT from STM.

Pakistan has very close relations with Turkey. Turkey’s President Recep Erdogan has repeatedly raised the Kashmir issue at international forums, even comparing Kashmir with the Palestine issue. Turkish shipyards are major supplier of warships to Pakistani Navy. Besides four new corvettes, Turkey has designed a fleet support vessel (FSV) for Pakistan, supports its submarine fleet and has signed a deal to sell 30 x T-129 attack helicopters that have been developed in collaboration with Italian company Finmeccanica (now Leonardo). In September 2019, Erdogan raised the Kashmir issue during the launch ceremony of new corvettes for the Pakistani Navy. Erdogan visited Pakistan in February 2020, where he said Turkey is Pakistan’s side over Kashmir and would support Pakistan from censorship by the Financial Task Force (FATF). The joint Pakistan-Turkey declaration made multiple references to Jammu and Kashmir. India issued a strong statement and gave a demarche to the Turkish envoy also.

India signed a $2.3 billion (Rs 15,000 cr) deal with Turkey to jointly manufacture five 45,000 ton FSVs in the same month – February 2020. In the joint project between Hindustan Shipyard Limited (HSL) and Turkey’s Anadolu Shipyard (TAIS), TAIS will provide the ship design, supply key machinery equipment and provide technical assistance. TAIS was the lowest bidder for the contract to manufacture the FSVs in HSL. It appears the lowest bid and the $2.3 billons deal weighed in favour of Turkey, overlooking Erdogan’s anti-India attitude, Turkey-Pakistan’s naval cooperation (TAIS included) and the hardcore Islamist Pakistan-Turkey nexus.  According to photos shared by TAIS, the FSVs to be built at HSL could be similar to Pakistan Navy’s fleet tanker PNS Moawin, built in Pakistan under the design provided by Turkey’s STM.

Pakistan has been using midget submarines since long which can be used for launching the SSG (N). Indian Marine commandos (MARCOS) similarly have their own 500-ton midget submarines designed by Larsen & Toubro and built by HSL. But the Pakistan-Turkey and Pakistan-China naval cooperation and boosting of the naval capabilities of Pakistan which has become the conduit for projection of China’s power towards the Arabian Sea and the Persian Gulf needs to be monitored. Chinese submarines have been observed parked in Pakistani ports periodicity. Increase in underwater capabilities will embolden Pakistan to use midget submarines to not only augment the sea denial of its harbours but launch the SSG (N) for offensive tasks along the coasts of India including for mining and sabotage of offshore installations. Chinese marines are already deployed in Djibouti and are to be deployed in Pakistan. They have been conducting joint exercises with Pakistan’s SSG (N) and will be based in Gwadar. A Chinese SEZ is coming up in proximity of Sir Creek and SSG (N) operations against India in this area is a possibility.

Gwadar is projected as a commercial port at south emd of the CPEC and considered unsuitable for submarine operations because of inadequate depth. But it would be naïve to assume China has taken it over for 49 years purely for commercial activity. It would indeed be dual use. Increasing the depth of harbours is no big deal for China considering what it has done in South China Sea for establishing military bases and reclaiming land at sea.  Chinese vessel ‘Tian Kun Hao’ can dig as deep as 35 meters under the sea floor and dredge 6,000 cubic meters in one hour.  In addition to Gwadar, a joint China-Pakistan naval and airbase is being constructed at Jiwani in the Gulf of Oman, as reported in Washington Times in January 2018.

Chinese troop presence at Jiwani and Gwadar in conjunction Pakistani ports of Pasni, Omara and Karchi will provide control of the entire Pakistani coast to China. Recent reports in media indicate that China has been resorting to building underground tunnels to house its submarines and even warships as protection against surprise attacks. For China’s strategic submarine force, such tunnels have been built at Jianggezhuang Naval Base near Qingdao and another one at Yulin. Smaller tunnels have been dug at Xiachuan Dao and at Xiangshan. There are other tunnels that are away from submarine bases in order to avoid suspicion. Since the Pakistani coastline is the future oceanic front for supporting Chinese operations in the Indian Ocean, it stands to logic that China will resort to similar tunneling activities in conjunction Pakistan to provide added protection for their submarines.

A recent article in US media speculates a futuristic submarine with electrical hull connectors, power generation and other systems to mount a laser weapon. Possibly this is already being worked upon by countries including China and should be a challenge for our R&D as well.