Pakistan: Who Decides Next Army Chief 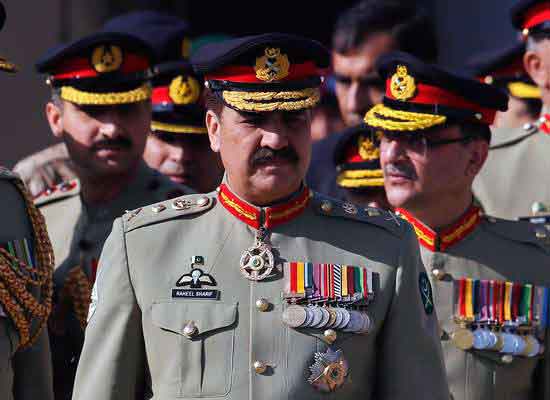 The Pakistan Military’s political arm, Imran Khan, is to lay siege of Islamabad on 02 Nov. Tehreek-e-Insaf + LeT + JeM + Lal Masjid + Saim-ul-Haq is a frightfully explosive cocktail. This cocktail, of course, has the backing of the military which further heightens the apprehension. Imran has set the pitch by accusing Nawaz Sharif of humiliating the military.

The Af –Pak region is again on cusp as far as US is concerned. So the next chief would be majorly determined by his suitability to further US strategic interests.

This is not the first time that the military has unleashed Imran to countervail Nawaz. Imran has issued the ultimatum to Nawaz to abdicate. The siege he has said would be politically fatal to the Prime Minister with no follow-ups and no re-takes. This time Imran’s ammunition is Nawaz’s alleged Panama links. The weapons however are brazenly jihadi tanzeems, some of them internationally proscribed. Yet, Imran is constantly invoking democracy.He has threatened of possible intervention of a third force. This third force is but the military.

The military-intelligence establishment is at a delicate juncture given the great uncertainty about the future of Gen Raheel Sharif who is due to retire shortly. The General, a protégé of Musharraf enjoys unprecedented popularity in Pakistan. It is this popularity that is the bane of Nawaz. He in his tenures, as Prime Minister, has appointed four Army Chiefs Gen Asif Nawaz Janjua (91), Gen Waheed Kakkar (93), Pervez Musharraf (98) and Raheel Sharif (2013). So he is no greenhorn in dealing with Army. Betrayed and bitten by Musharraf, he would do everything within his powers to stave off an extension to Raheel Sharif. Notwithstanding his posturing, Raheel Sharif would not prefer nor can afford, sudden oblivion. No politician does it and army chief in Pakistan is as cunning, if not more, than a politician.

External manipulations have been critical features in selection of army chiefs in Pakistan. It is invariably in consonance with US strategic imperatives. Ayub ascended as ruler because of the US imperative of SEATO and CENTO; Yahya Khan took over and then played a key role in effecting US-China link, a nearly impossible feat during Cold War; Zia ascended to power and then prosecuted the jihadi war on behalf of the US against Soviet forces in Afghanistan; and then the Americans launched OP Enduring Freedom in Afghanistan, after Musharraf took over.

…the LeT and the JeM are wings of the military, they too are not averse to anti-Shia agenda, but for political exigencies, camouflage their intentions…So who or which institution is not anti-Shia in Pakistan?

The Af –Pak region is again on cusp as far as US is concerned. So the next chief would be majorly determined by his suitability to further US strategic interests. China may be an all weather partner of Pakistan, but it is the US which has major leverages, after all the children of the Generals find rehabilitation and solace in America rather than China.

A political explosion in Pakistan therefore is very much on the horizon. Something major in the jihadi dynamics in Pakistan was expected amongst those conversant and schooled in political terror patterns in Pakistan.

The apprehension was not misplaced. On the night of 24 Oct, terrorists struck the Police Training College, in Quetta home to 700 recruits. The attack lasted five hours, leaving 60 dead and more than 100 injured. Lashkar-e-Jhangvi declared its hand and so did Islamic State. Only, in the first week of August this year, 70 lawyers lost their lives to suicide bombers. In fact an entire generation of lawyers was obliterated. They had gathered in a hospital following the assassination of the President of Baluchistan Bar Association, Bilal Anwar Kasi. Jamaat-ul-Ahrar, a faction of Pakistan-Taliban, as also Islamic State accepted responsibility.

The Islamic State, it may be inferred, is an idea, a philosophy, a banner that attracts various jihadi organisations rooted in similar philosophy on the Indian subcontinent. It also needs to be seriously reflected upon that a theocratic state, where religion is all pervasive, should produce suicide bombers, which is a clear indication that Islamic narrative in Pakistan has failed to provide psychological strength as also catharsis to its youth.

The trajectory of Lashkar-e-Jhangvi from its pedigree to Sipah-e-Sahaba (Deobandi) in 1984 under the benefaction of Zia-ul-Haq and its birth in 1996 has been characterized by political courtship and patronage of various hues, the last being Nawaz Sharif’s PML(N). It has enjoyed this patronage despite its self proclaimed anti-Shia agenda. Notwithstanding that the LeT and the JeM are wings of the military, they too are not averse to anti-Shia agenda, but for political exigencies, camouflage their intentions. Saim-ul-Haq, whose seminary is the beneficiary of Khyber Pakhtunkhwa government largesse at the behest of Imran Khan, planned the assassination of Benazir, largely because she was a Shia. Of course there were other political and strategic reasons as well. So who or which institution is not anti-Shia in Pakistan?

Whatever be the next dispensation in Pakistan, one thing is certain and inalterable that there is no institution is Pakistan which has not been radicalized or ‘jihadised.’

Prime Minister, Imran Khan and the Military—are all wielding their own jihadi groups in the game of one-upmanship. It is an established fact that the Punjab government provided monthly stipend to the family of jailed Malik Ishaq, the founder of LeJ, once the Sharif came to power in 2008. Ishaq was nominated in 44 cases in which 70 people were killed. The PML (N) allegedly had secret electoral alliance with LeJ. Meanwhile the military also ensures that its lateral outfits like LeT, JeM, Lal Masjid and Saim-ul-Haq seminary are given requisite funding and facilities from the political dispensation.

Imran’s threatened 02 Nov Islamabad siege and the LeJ attack in Police Academy in Quetta is very much related to the succession of the army chief. Raheel Sharif is no ordinary chief, he has presided over military courts, at least five dozen people have been hanged on his orders. He has presided over Op Zarb-e-Azb in FATA which Nawaz Sharif did not endorse willingly. Nawaz advocated negotiations with Pakistan-Taliban, as he is believed to have channels to the outfit. Raheel Sharif has overseen the massive crackdown in Karachi. His institutional clout was such that the then newly elected President of Afghanistan Mr. Ghani travelled to the GHQ to solicit his help for securing Afghanistan.

It naïve therefore to contemplate that Raheel Sharif has no post-tenure script. Consequently, the political road ahead for Nawaz Sharif is treacherous. Whatever be the next dispensation in Pakistan, one thing is certain and inalterable that there is no institution is Pakistan which has not been radicalized or ‘jihadised.’ The next army chief will be decided by America, Military, Jihadi groups and PM — in that order. The comprehensive National Action Plan (NAP) initiated after the Army Public School attack in Dec 2014, to root out terrorism lies in tatters. The Jihadi groups are now the second most important pillar in Pakistan after the military.

11 thoughts on “Pakistan: Who Decides Next Army Chief”