Home  >  News  > Geopolitics  >  Pakistan-US relations in a trough, but only for now

Pakistan-US relations in a trough, but only for now 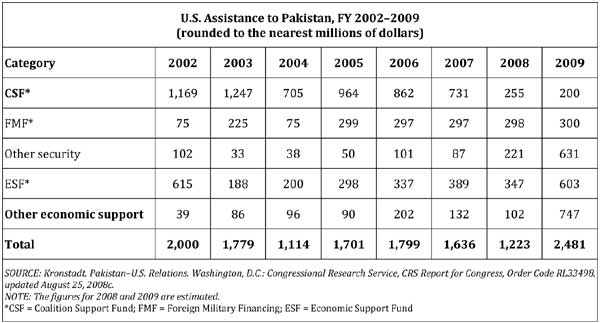 US Assistance to Pakistan

Towards the end of his last State of the Union address on January 24 President Obama said “One of my proudest possessions is the flag that the Seal Team took with them on the mission to get Bin Laden. On it are each of their names.” This was viewed quite differently in Pakistan where the attack that killed Osama bin Laden took place a few miles away from the Pakistan Military Academy at Kakul.

The latest leaked US military and NATO report that the Taliban backed by Pakistan was poised to take charge of Afghanistan once foreign forces withdraw has other aspects to it.

In fact, all of 2011 has been marked by incidents that have pushed US-Pakistan relations into an ever deepening trough.

The year started on a tense note when Raymond Davis, a former US Army soldier but employed in Pakistan with a private contractor and also with CIA, shot dead two supposedly unarmed men and one more died in January. This led to a furore that refused to die away despite interventions even by President Obama. Eventually Davis was released and flew home on March 16 after payment of US $ 2.4 million as blood money (diyya).

One day after Davis’ release US resumed its drone attacks and 40 persons died in this attack in Datta Khel North Waziristan. This was on March 17. The Pakistan Army Chief, Gen Pervez Kayani reacted very strongly describing this action as intolerable and unjustified. More retaliations were to follow. In April 2011 Pakistan suspended supplies for three days through Pakistan for NATO forces in Afghanistan.

The US announcement on May 2 that Osama bin Laden had been killed in Abbottabad and that US had not been informed of OBL’s whereabouts brought forward a multitude of reactions. The Pak Army notably was embarrassed, the civilian government showed its ineptitude and lack of control on the State, while the right wing was up in arms with a new display of virulent anti-Americanism. Meanwhile the Doctor who had assisted the US to help find Osama was taken into custody by the Pakistani authorities for being in touch with foreign intelligence agencies.

Today Pakistan’s economy is in a mess and it has few friends who will be able to take on the burden, not even China.

The terrorist attack on PNS Mehran Karachi (May 26) which destroyed two US AWCs was a retaliation of US action that killed Osama bin Laden. This was a setback to US-Pak relations and another embarrassment for the Pak Army.

Probably reacting to Pakistani attitudes and belligerence, Admiral Mullen reacted on 2 June saying that there would be a substantial cut in US forces in Pakistan followed by the US announcement on July 10 about the suspension, of military aid worth US $ 800 million.

September 11 – there was a massive truck bomb explosion on the outskirts of Kabul that injured 77 US soldiers and killed five Afghans. Two days later the US Embassy and NATO were both attacked by Taliban insurgents. Seven persons died along with 19 injured. This attack as a show of strength against the symbols of US and NATO power. On September 22, one week before he was to demit office, Chairman of the Joint Chief of Staff accused Pakistan of supporting Haqqani Network militant group in Afghanistan; from its bases in Pakistan. As expected Pakistan denied this.

…at a time when Pakistan’s chief USP was its willingness and ability to assist the US effort. The blackmail has gone too far and this will have to stop but it is election year in the US. This means that the US too will need to accommodate some of Pakistan’s positions.

In October, the by now famous or notorious Memogate that cost Pakistan Ambassador Haqqani his job in Washington surfaced, thanks to leaks by a US citizen of Pakistani origin, Mansoor Ijaz. The memo was supposed to have been delivered to Admiral Mullen earlier in May General Pasha the ISI chief had specially flown to London for a secret rendezvous with Ijaz and it appeared that there was an intelligence overhang to this.

At least 24 Pakistan troops killed when NATO forces fire over the border hitting an army check post in on November 26 in the Mohmand agency of FATA. In retaliation, General Kayani ordered that intruding drones be shot down and asked the US forces to vacate the Shamsi drone base in Balochistan, within a fortnight.

All this had left the Pakistan Army badly bruised. Its ego had been hit and it needed to take an apparently strident position against an increasingly impatient and even imperious US. In the US there were increasing signs of a re-evaluation of its relations with Pakistan with several think tanks discussing the best way of Pakistan and predicting a dismal future. But if one asks whether this will mark a permanent breach in relations between the two countries, then the answer has to be, No.

Over the years, obsessed with India and the desire to seek equality with India, Pakistan’s leaders had perfected the art of handling the US, preserving and furthering its core interests, essentially by using the advantages that geography has provided. The Pakistan-US romance began in the tense years of the Cold War. Since then, though the ardour has cooled at times, it has renewed with fervour periodically.

While Pakistan has been consistently useful to the US in the protection of its global interests, the US has not minded if Pakistan occasionally had pot shots at its pro-Soviet neighbour. US and British diplomats and emissaries went out of their way in the 1960s to push India to a deal with Pakistan on Kashmir that was designed to favour its ally.

In the 1970s there was US anger during the 1971 war and again after the 1974 nuclear test without understanding Indian interests. The 1980s were the years of the Afghan jihad, during which period the US President repeatedly certified to Congress that Pakistan was not making the nuclear bomb. The 1990s were essentially Clinton years a period of indifference as far as the Americans were concerned while Pakistan had got its nuclear black market well organised.

These kind of military oriented regimes and romances survive only so long as there is military congruity between the two powers.

Post Kargil, Pakistan was in trouble but only till September 11, 2001. Thereafter, once again, as in the case, recent sins were forgiven and Pakistan quickly became a stalwart ally of the allies. The relationship is at present at its lowest ebb in many years. This may not last long simply because Pakistan too has many limitations and despite the present bravado cannot do without the US.

The latest leaked US military and NATO report that the Taliban backed by Pakistan was poised to take charge of Afghanistan once foreign forces withdraw has other aspects to it. It mentions that Pakistan was aware that senior Taliban representatives, like Nasiruddin Haqqani lived in the vicinity of ISI headquarters in Islamabad. The report also adds that 27000 interrogations of more than 400 captured Taliban, Al Qaeda and other terrorists establishes a clear link between the ISI and the Taliban. This may be the first authoritative revelation.

Sooner or later, Pakistan will make moves to seek normalcy with the US. Pakistan has for decades boxed above its weight by trying to militarily (including sub-conventional jihadi options) take on a larger, stronger India with a greater depth, militarily, economically and geographically. During the Cold War the US was willing to underwrite this confrontation. These kind of military oriented regimes and romances survive only so long as there is military congruity between the two powers.

Today Pakistan’s economy is in a mess and it has few friends who will be able to take on the burden, not even China. Saudi Arabia too may not provide gratis assistance.his time around, Pakistani Generals may have overplayed their hand. In the last year, the US has been able to reduce its dependence on Pakistan for logistic support to NATO that was routed through Pakistan. It has also seen Pakistani double dealing and intransigence with regard to the US-led War on Terror. This is happening, at a time when Pakistan’s chief USP was its willingness and ability to assist the US effort. The blackmail has gone too far and this will have to stop but it is election year in the US. This means that the US too will need to accommodate some of Pakistan’s positions.

In fact, drone attacks have resumed and these are early signs. The US Pakistan relationship may not have a great future and may remain an arrangement of convenience.